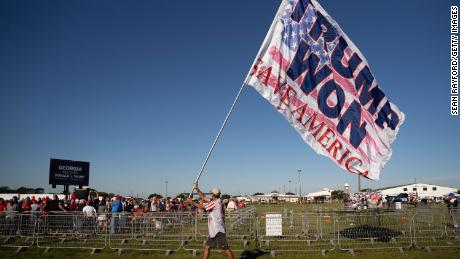 Share
Tweet
Share
Share
Email
Comments
While the bogus fraud claims have long been debunked, these latest revelations are being made in sworn depositions and highlight how little vetting was done by certain Trump allies seeking to spread doubt about the integrity of the presidential election results.
The more than 2,000 pages of documents reviewed by CNN provide the most significant look yet at evidence collected in several defamation cases brought against top Trump mouthpieces. In this lawsuit, former Dominion Voting Systems executive Eric Coomer alleges he was defamed by the Trump campaign, Rudy Giuliani, Sidney Powell and prominent conservatives.
According to the account that Giuliani gave in the case, he spent less than an hour reviewing allegations that Coomer was part of a plot to rig the election before publicly making those claims at a November press conference.

And when Powell was deposed by Coomer’s lawyer, she acknowledged that she did not have “a lot of specific knowledge about what Mr. Coomer personally did” in the supposed scheme to steal the election.
The new documents have already been cited in at least one other case stemming from bogus election fraud claims, where Wisconsin state officials are seeking sanctions against Powell for making those claims there. The Wisconsin officials say Powell and other Trump-aligned lawyers failed at “even the most basic” effort to verify conspiracy theories.
“Even a modicum of research — nothing more complex than a little Googling — would have demonstrated the absence of any basis for the theory advanced here that Dominion voting machines had altered individual votes, much less the outcome of the election,” the Wisconsin officials said, pointing to the new Coomer case documents.
Coomer, the former security director at Colorado-based Dominion, late last year sued the Trump campaign and various conservative media who pointed to him — and especially anti-Trump posts he made on social media — when making their vote rigging claims.
In court filings submitted with the depositions last month, Coomer argued that Trump team figureheads and right-wing media including One America News Network continued to spread misinformation even knowing it might not be true. In addition to the accounts from Powell and Giuliani, the documents give a behind-the-scenes look into how certain election-rigging claims traveled through conservative media with little attention to the credibility of the allegations.
Showing evidence that a defendant knowingly communicated false statements is a key component in proving defamation claims.
Attorneys for Giuliani, Powell, OAN, conservative commentator Michelle Malkin and the Trump campaign didn’t respond to CNN’s requests for comment. They are asking the court to dismiss Coomer’s lawsuit.
A district court judge in Denver County, Colorado, has not determined whether to allow Coomer’s lawsuit to move forward.
Coomer’s case is further along in the evidence-collection phase than several similar, ongoing defamation cases in which Dominion is suing Giuliani, Powell and others.
Dominion has denied repeatedly that its vote-counting services allowed for election fraud, and since the election, state and US authorities have repeatedly found no widespread fraud in the 2020 vote.
Coomer left the company earlier this year. He says in his court filings that he’s “suffered severe emotional distress,” has dealt with “anxiety and depression,” and has seen his reputation “tarnished across the country,” while his “career in election services is effectively over.”

‘We didn’t pronounce him guilty’

The bogus claims about Coomer were put in front of a national audience during the infamous November 19 press conference at the Republican National Committee headquarters, where Giuliani, Powell and other lawyers aligned with Trump threw out unhinged allegations about fraud in the 2020 election, while laying out their plans to challenge the results in court.
Powell made a claim Coomer had been “recorded in a conversation with antifa members, saying that he had the election rigged for Mr. Biden.” (She admitted in her deposition for the case that there is no such recording.)
Giuliani called Coomer “a vicious, vicious man” with antifa ties, who “specifically” said “that they’re gonna fix this election.”
In an August deposition that was filed in court last month, Giuliani estimated that he spent less than an hour reviewing the claims against Coomer before repeating the allegations, saying he may have spent as little as a few minutes here and there.

When pressed in the deposition about exactly what Coomer could have done to influence the election, Giuliani said that he could “guess but it would not be an educated guess.”
“Exactly what role he played, I had no idea. It’s a big company, lots of people do different things. Was it his job just to announce it? Was it his job to carry it? I had no idea, nor was I particularly interested at that point,” Guiliani recalled in his deposition in August.
Giuliani said he was told by people working with his team that there was tape of Coomer’s promises to rig the election; as Powell acknowledged in her deposition, there was no such recording. Asked by Coomer’s lawyer if Giuliani’s approach was a “trial by press conference,” Giuliani called it an “investigation by press conference.”
“We didn’t pronounce him guilty. We laid out the facts that we had,” Giuliani said in the deposition.
Powell has taken a similar tactic in her testimony in the Coomer suit, and in separate court proceedings where she is facing consequences for making election fraud claims in another state. Repeatedly, she and other lawyers she worked with on pro-Trump post-election court cases have said they put unvetted election fraud accusations into their public filings and spoke about the accusations publicly, with a belief they would be investigated later.
A federal judge, in sanctioning Powell and others in August, said they “engaged in litigation practices” that were “abusive and, in turn, sanctionable” and intended to undermine the public’s faith in the election.
In her July deposition, Powell downplayed the public remarks she made about Coomer, calling him a “gnat in the tsunami of information.” She also admitted that she didn’t know “anything” about the conservative activist who was her source on the claims about Coomer, besides what that activist wrote in an affidavit he gave to Powell to use in court.
Like Giuliani, she had little to point to when asked how Coomer could have rigged the election.
“I don’t have a lot of specific knowledge about what Mr. Coomer personally did. That would be the purpose of discovery in any proceeding that we filed, and we never got discovery in any proceeding that we filed,” Powell said.

‘Everything pretty much went out the window’

Nearly a week before Powell and Giuliani took to the podium at the RNC headquarters in Washington to make their election-rigging allegations, the Trump campaign had put together a memo debunking key points in their claims, including in their claims about Dominion and Coomer. The New York Times first reported on the existence of the memo — a significant, apparent red flag within the campaign at a time when Trump surrogates were still publicly railing about Dominion and election fraud.
There were no indications in the Coomer court filings that the memo was shared with Giuliani and the other Trump-aligned lawyers who were most aggressively hyping the claims. Giuliani, in his deposition, said he didn’t recognize the document because he saw “10,000 documents” during the campaign.
Campaign CFO Sean Dollman, in his deposition, recalled how Giuliani operated outside the campaign’s established lines of communication.
“[W]e spent, I mean, years setting up an internal process of where documents would go, who sees them, and then making sure that people review them, and approvals,” Dollman said. “But when Mr. Giuliani came in with his team, the — that whole approval chain, that whole — everything pretty much went out the window.”
Giuliani said in a deposition in the Comer case that he wouldn’t have paid attention to the campaign’s research memo debunking Dominion’s claims even if it had been shared with him. He said he believed that within the campaign there was “a major effort to undercut what we were doing” and he called the memo a “useless piece of information.”
“I thought the majority of them were working for [Trump] to concede as soon as possible so they could move on to another job and so they wouldn’t be criticized too heavily in The Washington Post,” he said.
In his August deposition, Dollman downplayed the significance of the memo and continued to claim that the election was fraudulent, though he couldn’t identify the type of fraud that had supposedly occurred.
“What is that opinion based on?” Coomer’s lawyer asked him.
“Just — we have no underlying definite facts that it wasn’t,” Dollman said.

‘Reckless disregard for the truth’

The conservative media-sphere played a major role in injecting the bogus claims about Dominion and Coomer into the Trump-world’s bloodstream, according to Coomer’s theory of the case. Several conservative commentators are named as defendants and have given depositions in the legal proceedings. Key verification steps — like contacting Coomer for comment about the claims — were not made by the far-right media figures who promoted the theories, according to the court records.
The Coomer claims were broadcast to conservative commentator Michelle Malkin’s audience in a November 13 livestream interview she did with a conservative activist making the allegations, and again in a prerecorded interview she did with the activist on Newsmax later that month.
Malkin, now a defendant in Coomer’s case, said in her deposition that she did not contact Coomer or Dominion to get comment on the allegations between the two interviews. In court filings in Coomer’s case, Malkin’s lawyers have pointed to a disclaimer she provided in her interviews that there was no public “evidence that Eric Coomer made good on his threat.”
Malkin has cut ties with Newsmax, which issued a retraction and apology to Coomer. Newsmax was initially a defendant in the lawsuit but in April reached a settlement in the case.
Powell’s team noticed Malkin’s November 13 interview and sought out the conservative activist making the allegations about Coomer to submit an affidavit, the court records of Powell’s deposition show.
OAN also showcased the Coomer allegations in a 30-minute broadcast segment, spearheaded by the network’s White House correspondent Chanel Rion, called “Dominion-izing the Vote,” which first aired on Nov. 21.
OAN President Charles Herring defended the project in a sworn statement filed in the Coomer case and in his deposition. “OAN as an organization stands by the reporting and believed at the time of the reporting that the statements were true,” his written declaration said.
He said, according to his deposition, that he instructed Rion get in touch with Coomer but was not sure of what the effort looked like. “She had communicated to me that she believed he was in hiding at that time,” Herring said.
Rion, in her own deposition, said she didn’t contact Coomer because she couldn’t figure out a way to reach out to him. She said she did not contact Dominion to see if the company would make him available for comment.
“I just don’t remember all of the methods that I did to try and find him. But he was — I could not find him, at the end of the day,” she said.
Herring’s lawyer pointed out that the OAN piece included Dominion’s denials.
“Dominion has denied this. Why — why would you — why would you report on something that Dominion has denied?” Herring’s lawyer asked him at the deposition.
“We’ve seen a lot of denials that aren’t correct,” Herring said.
In another declaration — one that Coomer is relying on to support his case — a former OAN employee has accused the network of airing “false stories.”
“The ‘Dominion-izing the Vote’ report is a good example of one of those … with reckless disregard for the truth,” Marty Golingan, a former OAN producer, wrote in his declaration.
Neither Herring nor the lawyer representing him and Rion responded to CNN’s questions about the former employee.

Leslie Perrot and Jeremy Harlan contributed to this story.