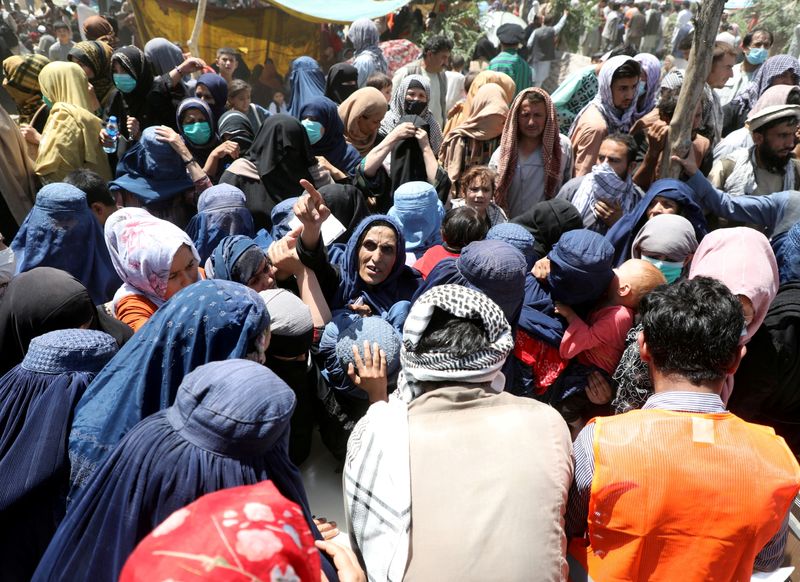 FILE PHOTO: Internally displaced families from northern provinces, who fled from their homes due the fighting between Taliban and Afghan security forces, take shelter in a public park in Kabul, Afghanistan, August 10, 2021.REUTERS/Stringer/File Photo

ISTANBUL (Reuters) – The Turkish Red Crescent is sending aid to Afghanistan to feed internally displaced people in need amid turmoil following the Taliban’s takeover, the organisation’s head said on Friday.

Half a million people have been displaced in Afghanistan in recent months, according to U.N. High Commissioner for Refugees Filippo Grandi, a number which would grow if health services, schools and the economy break down.

Turkish Red Crescent President Kerem Kinik said the shipment of food would be sent from Pakistan towards Kabul on Saturday and provide for 16,000 people for a month.

“There is a serious food crisis right now. Public order needs to be provided for local production,” he told Reuters by telephone, citing a halt in international trade, drought and a decline in international aid as reasons for the problem.

He said the Turkish Red Crescent had provided support to areas under Taliban control before U.S. troops pulled out and there had been no problem in providing aid after the withdrawal.

“The Taliban appointed an authority to the head of the Afghan Red Crescent for the transition process,” he said, adding that they were cooperating to bring humanitarian aid to Afghans.

The Turkish Red Crescent had provided some $250,000 since 2018 to Afghans who established their own businesses after returning to the country and would increase the amount, he said.

Turkey hosts some 300,000 Afghans as well as 3.6 million Syrian refugees – the largest refugee population in the world.

Bordering Iran, Iraq and Syria on its eastern and southern flanks and Greece and Bulgaria to the west, Turkey is a transit route for migrants trying to reach the European Union.

Erdogan’s political support has taken a hit over the large refugee presence in Turkey and he has said he will not allow Afghanistan’s turmoil to be an excuse to turn his country into a “migrant storage unit” for the European Union.

Turkish authorities are building a wall along the eastern border and stepping up patrols to intercept migrants.

NATO member Turkey has been working with Qatar to operate Kabul airport and open it for international travel after the Taliban took power and foreign countries withdrew.

Erdogan said last week the Taliban’s current approach and their interim government were not inclusive but Turkey was willing to work with them if they formed a more encompassing government, broadcaster Haberturk reported.