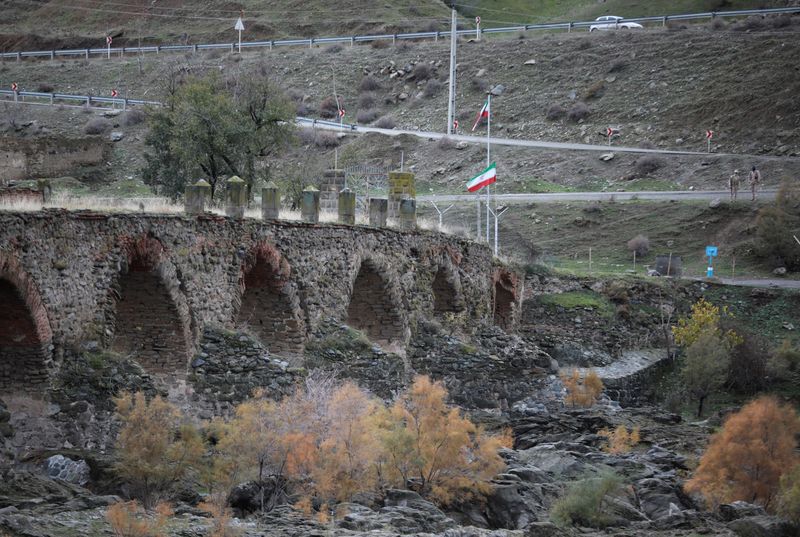 A view shows the ancient Khodaafarin Bridge near the border with Iran in the area, which came under the control of Azerbaijan’s troops following a military conflict over Nagorno-Karabakh against ethnic Armenian forces and a further signing of a ceasefire deal, with Iranian service members seen in the background, in Jabrayil District, December 7, 2020. REUTERS/Aziz Karimov

on Friday as tensions between the two neighbours rose over issues including Baku’s relations with Tehran’s arch-enemy Israel.

Iranian state media said the exercises involved armoured and artillery units, as well as drones and helicopters. They kicked off near the Poldasht and Jolfa border crossings with Azerbaijan.

Iran has long criticised Azerbaijan’s military ties with Israel, which include purchases of Israeli arms. Tehran has also been wary over nationalists in Turkey and Azerbaijan fanning secessionist tendencies among its Azeri minority.

After Azerbaijan’s President Ilham Aliyev reportedly voiced “surprise” over the planned exercises, Iranian Foreign Minister Hossein Amirabdollahian said on Thursday that holding military exercises by a state within its territory was part of its national sovereignty, Iranian state media said.

Referring to an Israeli presence along Iran’s borders, Amirabdollahian told the new Azeri ambassador: “Iran does not tolerate the Zionist regime’s activity against its national security and will take whatever action is necessary,” state media reported.

According to the Stockholm International Peace Research Institute (SIPRI) think tank, Israel provided Azerbaijan with some $825 million in weapons between 2006 and 2019.

Separately, Iran on Friday denounced a visit by Israel’s foreign minister to Bahrain to mark the establishment of relations, saying the trip left a stain on the Gulf Arab state’s rulers that “will not be erased”.