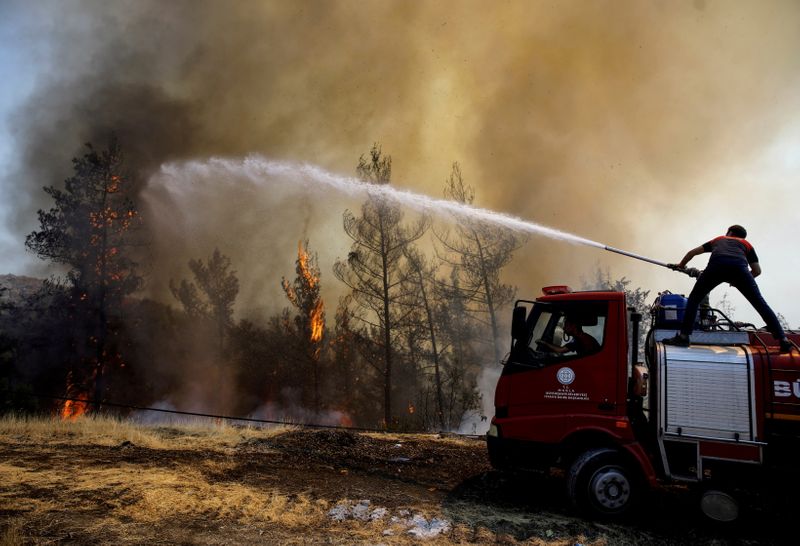 FILE PHOTO: A firefighter tries to extinguish a wildfire near Marmaris, Turkey, August 1, 2021. REUTERS/Umit Bektas TPX IMAGES OF THE DAY

ISTANBUL (Reuters) – Turkish authorities battling the country’s worst ever wildfires have been accused of failing to prepare for the threat after official data showed they spent only a fraction of the modest funds budgeted to prevent forest fires this year.

Eight people have been killed in the fires which have swept through Turkey’s southwestern coastal regions, forcing the evacuation of tens of thousands of people including tourists and briefly threatening to engulf a power plant.

President Tayyip Erdogan’s government has faced criticism that its response has been slow and inadequate – with opponents zeroing in on a lack of firefighting planes which forced Ankara to scramble to procure them from abroad.

In the last two weeks, fires in Turkey have burnt more than three times the area https://graphics.reuters.com/TURKEY-WILDFIRE/myvmnmqaqpr/turkey-fires.jpg affected in an average year, a European fire agency said. Neighbouring countries have also battled blazes fanned by heatwaves and strong winds.

Turkey’s state forestry agency said that in the first half, it spent less than 2% of the 200 million lira ($24 million) it had set aside this year for construction, projects and equipment used to fight forest fires.

“The OGM budget was planned as if there wasn’t going to be any fires,” said Republican People’s Party (CHP) deputy Murat Emir, who filed parliamentary questions to the Agriculture and Forestry Minister Bekir Pakdemirli on Tuesday.

“These figures show why there has not been effective intervention against the fires,” Emir said, adding the ministry had been “caught unprepared”.

The ministry did not immediately respond to Reuters questions about the spending, and it was not clear if other resources were allocated for forest fire protection apart from the forestry directorate budget.

NO PLANES TO FIGHT FIRES

The government has blamed the lack of resources on the Turkish Aeronautical Association (THK), saying it failed to maintain a fleet of firefighting planes despite generous funding.

“They say ‘We can’t renew the planes due to material difficulties’, whereas they could have used this money to renew the planes rather than spending it elsewhere,” Pakdemirli was quoted as telling the Haberturk news website.

Among the 16 planes and 51 helicopters in the current operation are aircraft from Russia, Spain, Ukraine, Croatia, Iran and Azerbaijan.

Emir, the opposition politician, noted that the OGM report showed forest-fire related spending plans included purchase of 26 helicopters, for which spending plans set aside a nominal sum of only 1,000 lira ($119).

He asked the minister why resources for helicopter purchases had not been allocated if the ministry did not have enough planes or helicopters.

In a television interview on Wednesday, Erdogan said the opposition was spreading a “terrorism of lies” concerning the fire-fighting operation, adding his government had handled natural disasters professionally during its 19 years in power.

The pro-Kurdish Peoples’ Democratic Party (HDP) has requested an investigation, alleging fire preparations and responses were late and inadequate.

It also voiced concern about Turkey not ratifying the Paris accord on climate change – the only G20 country not to do so yet – and linked the issue to the fires.

“The non-ratification of this accord is a reflection of the government policies which have led to massacres of nature,” the HDP, parliament’s third-largest political force, said.