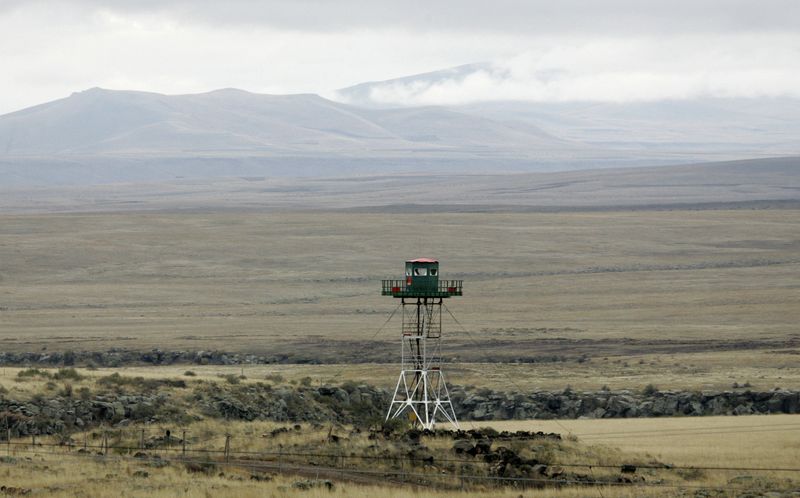 A border tower is seen in Getap, some 85 km (53 miles) northwest of Yerevan, in the Armenian side of the Armenian Turkish border, November 1, 2009. REUTERS/David Mdzinarishvili

By Tuvan Gumrukcu and Gabrielle Tétrault-Farber

ANKARA/MOSCOW (Reuters) -Turkey and Armenia on Friday said a first round of talks in more than ten years was “positive and constructive,” raising the prospect that ties could be restored and borders reopened after decades of animosity.

Turkey has had no diplomatic or commercial ties with its eastern neighbour since the 1990s. The talks in Moscow were the first attempt to restore links since a 2009 peace accord. That deal was never ratified and relations have remained tense.

The Turkish and Armenian foreign ministries said on Friday the talks were held in a “positive and constructive” atmosphere, adding both sides were committed to a full normalisation without any pre-conditions. They said special envoys had “exchanged their preliminary views regarding the normalisation process”.

The neighbours are at odds over several issues, primarily the 1.5 million people Armenia says were killed in 1915.

Armenia says the 1915 killings constitute a genocide, a position supported by the United States and some others. Turkey accepts that many Armenians living in the Ottoman Empire were killed in clashes with Ottoman forces during World War One, but contests the figures and denies killings were systematic or constitute genocide.

Tensions again flared during a 2020 war over the Nagorno-Karabakh territory. Turkey accused ethnic Armenian forces of occupying land belonging to Azerbaijan. Turkey has since called for a rapprochement, as it seeks greater influence in the region.

In separate but similarly worded statements, the foreign ministries said a date and location for the next round of talks would be finalised later.

Turkish diplomatic sources said the discussions between the delegations lasted for about 1.5 hours.

Russia’s TASS news agency cited Armenia’s foreign ministry as saying on Thursday it expected the talks to lead to the establishment of diplomatic relations and opening of frontiers closed since 1993.

Thomas de Waal, a senior fellow with Carnegie Europe, said in November opening borders and renovating railways to Turkey would have economic benefits for Armenia, as the routes could be used by traders from Turkey, Russia, Armenia, Iran and Azerbaijan.

Turkish Foreign Minister Mevlut Cavusoglu said last year the two countries would also start charter flights between Istanbul and Armenia’s capital Yerevan under the rapprochement, but that Turkey would coordinate all steps with Azerbaijan.

The flights are set to begin in early February.

Despite strong backing for normalisation from the United States, which hosts a large Armenian diaspora and angered Turkey last year by calling the 1915 killings a genocide, analysts have said the talks would be complicated.

Emre Peker, a London-based director at Eurasia Group, said a cautious approach focusing on quick deliverables was expected on both sides due to the old sensitivities, adding the role of Russia, which brokered the Nagorno-Karabakh ceasefire and is the dominant actor in the region, would be key.

Cavusoglu has also said Russia contributed to the process of appointing the special envoys.

“The bigger challenge will come from the question of historic reconciliation,” Peker said, adding that the fate of talks would depend on “Ankara’s recognition that it must right-size its ambitions.”

(Reporting by Tuvan Gumrukcu in Ankara and Gabrielle Tetrault-Farber in Moscow;Editing by Robert Birsel and Frank Jack Daniel)