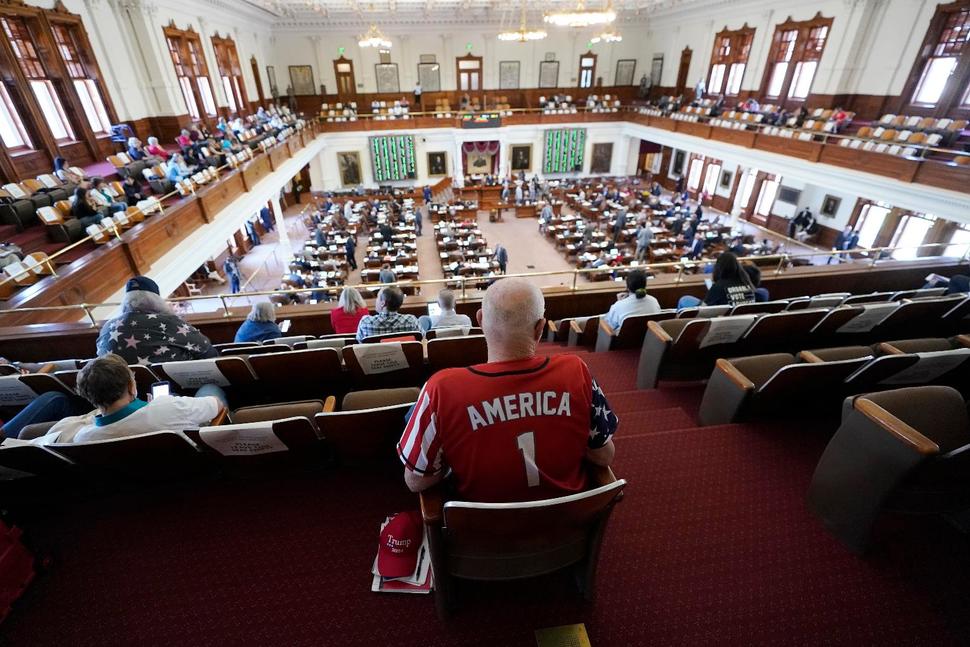 Many Republicans, led by Donald Trump, are continuing to question the validity of the 2020 election, and critics say that denial shows how the party is increasingly open to bucking democratic norms.

Seven months after Election Day, former President Donald Trump’s supporters are still auditing ballots in Arizona’s largest county and may revive legislation that would make it easier for judges in Texas to overturn election results.

In Georgia, meanwhile, the Republican-controlled state legislature passed a bill allowing it to appoint a board that can replace election officials. Trump loyalists who falsely insist he won the 2020 election are running for top election offices in several swing states. And after a pro-Trump mob staged a violent insurrection at the U.S. Capitol to halt the certification of Democrat Joe Biden’s election victory, Republicans banded together to block an independent investigation of the riot, shielding Trump from additional scrutiny of one of the darkest days of his administration.

To democracy advocates, Democrats and others, the persistence of the GOP’s election denial shows how the Republican Party is increasingly open to bucking democratic norms, particularly the bipartisan respect traditionally afforded to election results even after a bitter campaign. That’s raising the prospect that if the GOP gains power in next year’s midterms, the party may take the extraordinary step of refusing to certify future elections.

“We have to face the facts that Republicans — obviously with exceptions — have become an authoritarian party,” said Steven Levitsky, a Harvard political scientist and co-author of the book “How Democracies Die.” “It’s impossible to sustain a democracy in a two-party system when one of the parties is not willing to play by the rules of the game.”

Republicans have already offered a preview of how they might operate. On Jan. 6, the day of the Capitol riot, a majority of House Republicans voted to overturn Biden’s victories in Arizona and Pennsylvania. Biden still would have won an Electoral College victory without those states, but the move signaled how the traditionally ceremonial congressional certification process could be weaponized.

For his part, Trump continues to push Republicans to embrace his election lies. He’s criticized his former vice president, Mike Pence, for fulfilling his constitutional duty to preside over the congressional certification of Biden’s victory. And Trump has gone a step further recently by giving credence to a bizarre conspiracy theory that he could somehow be reinstated into the presidency in August, according to a longtime Trump ally who spoke on condition of anonymity to discuss private conversations.

There’s no constitutional or legal mechanism for Trump to return to the presidency absent winning an election in 2024. Trump’s argument that the last election was tainted has been roundly rejected by federal and state officials, including his own attorney general and Republican election leaders. Judges, including those appointed by Trump, also dismissed his claims.

But Levitsky and others warn there are several weak points in the U.S. system where a political party could simply refuse to allow its opponent to formally win a presidential election.

“I’m more concerned about this now than I was on Jan. 7,” said Edward Foley, a law professor at The Ohio State University who studies election disputes. “It seems that, over the months, the lesson has not been ‘never again,’ but how to be more effective next time.”

Still, even critics of the former president and the election paranoia he spread in his party say it’s important not to blow risks out of proportion.

“This strikes me as being overblown,” said Trey Grayson, a former Kentucky secretary of state and a Republican who has been sharply critical of Trump’s election fraud claims.

Grayson said a comparable worry is that voting procedures have become a partisan issue like taxes and abortion, fomenting suspicion of election results. “Both sides are really amping up their rhetoric to amp up their bases,” Grayson said, acknowledging that “there’s clearly a lot more bad stuff going on on my side now.”

Nonetheless, democratically elected officials were able to withstand that “bad stuff” in 2020, despite Trump’s pressures. “When it came time for Republicans to do something in the 2020 election, most of those in power did the right thing,” said Rick Hasen, an election law expert at the University of California-Irvine.

Georgia Secretary of State Brad Raffensperger and Gov. Brian Kemp acknowledged Biden’s win and resisted Trump’s entreaties to overturn it. Republican Gov. Doug Ducey did the same in Arizona. And Mitch McConnell, who controlled the Senate on Jan. 6, gave a scorching speech condemning Trump’s efforts to overturn the election. Only a handful of Republican senators voted to reverse Biden’s victories in Arizona and Pennsylvania.

Still, Hasen said he doesn’t want to sugarcoat things. “There are a lot of warning signs,” he said. “It is a very dangerous moment for democracy.”

Georgia’s new elections bill strips Raffensperger of some of his election duties and gives the GOP-controlled state legislature the ability to replace local election officials. Arizona’s Republican-controlled legislature is pushing to strip Democratic Secretary of State Katie Hobbs of her ability to defend election lawsuits, and state Rep. Mark Finchem, who was at the Jan. 6 rally outside the Capitol and is a central proponent of the Arizona audit, is running for her position.

Levitsky said the United States’ complex electoral system stands out among international democracies by vesting oversight of elections in local, partisan officials. “We rely a lot on local officials, and if one party decides not to behave, we are in for a world of trouble,” he said.

Still, that system has worked for more than 200 years. “There are a lot of safeguards,” Grayson said. “Now, we can blow through those safeguards and, if it comes down to one state like in 2000, you don’t have all 50 safeguards.”

Grayson also noted that voters make the final decision. The secretary of state candidates who argue Trump actually won in 2020 will have to win a Republican primary, then a general election to gain power. Congressional candidates may have to answer questions about whether they would seat a president of the opposite party.