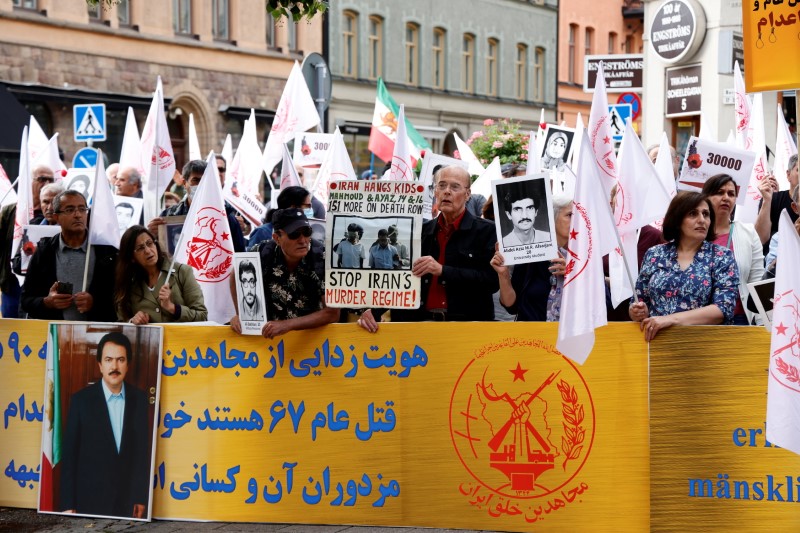 Supporters of People’s Mojahedin Organization of Iran protest outside Stockholm District Court on the first day of the trial of Hamid Noury, 60, accused of involvement in the massacre of political prisoners in Iran in 1988, Stockholm, Sweden August 10, 2021. Stefan Jerrevang/TT News Agency/via REUTERS

STOCKHOLM (Reuters) – About 100 demonstrators gathered outside a court in Stockholm on Tuesday to protest against the Iranian regime on the opening day of the trial of a 60-year-old Iranian citizen suspected of war crimes and murder, Swedish news agency TT reported.

The man, whom prosecutors have declined to name publicly, has been held in custody in Sweden for almost two years and is accused of having played a leading role in the killing of political prisoners executed on government orders at the Gohardasht prison in Karaj, Iran, in 1988.

It is the first time anyone has been brought before a court to stand trial over the purge.

Under Swedish law, courts can try both Swedish citizens and other nationals for crimes against international law committed abroad.

The trial is likely to focus unwelcome attention on Iran’s hardline President Ebrahim Raisi, who was officially inauguarated last week and who is under U.S. sanctions over a past that includes what the United States and activists say was his involvement as one of four judges who oversaw the 1988 killings.

Raisi, when asked about the allegations, told reporters after his election in June that he had defended national security and rights.

“If a judge, a prosecutor has defended the security of the people, he should be praised … I am proud to have defended human rights in every position I have held so far,” he said.

The man on trial in Stockholm was a prosecution official who worked in the prison, according to Swedish authorities.

He is suspected of involvement in the deaths of a large number of prisoners who belonged to or sympathized with the Iranian People’s Mujahideen opposition group, as well as the murder of other jailed dissidents.

Amnesty International has put the number executed at some 5,000, saying in a 2018 report that “the real number could be higher”.

Iran has never acknowledged the killings.

The trial is expected to last run until April 2022.