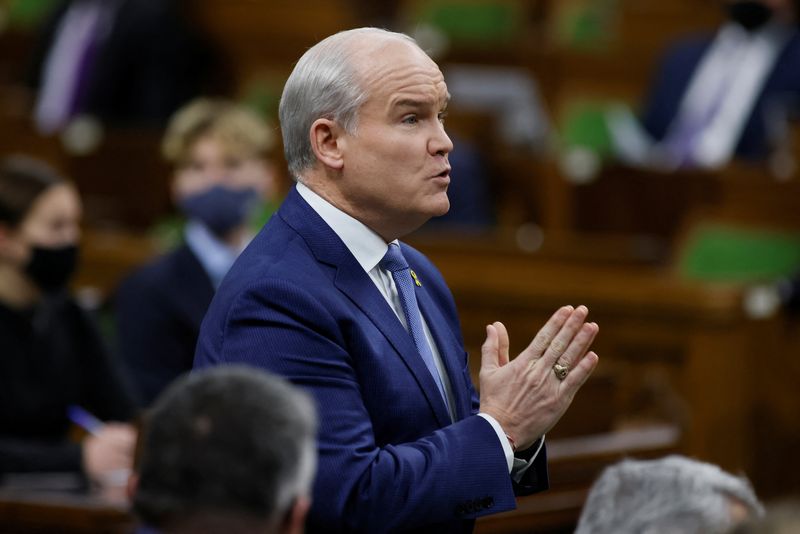 Legislators voted 73 to 45 to replace O’Toole, who took over as head of the Conservative Party in August 2020. He had vowed to defeat Trudeau but instead led the right-leaning party to a disappointing finish in 2021 elections.

O’Toole, in remarks posted on Facebook, said he would remain in Parliament, pledging “unwavering loyalty” to the next leader.

The party selected Candice Bergen, the Conservative’s deputy head, as interim leader on Wednesday night ahead of a convention to choose a permanent successor to O’Toole, according to a statement. Bergen, in parliament since 2008, faced criticism last year after an undated photo emerged of her wearing a “Make America Great Again” hat, a slogan of former U.S. president Donald Trump.

Some disenchanted Conservatives said O’Toole had pulled the party too far into the middle during the campaign, announcing major policies without consultation.

O’Toole, who represents a parliamentary district in the vote-rich province of Ontario, said the tactic was needed to attract more moderate voters.

But the move irritated many in his party, which has a strong populist wing. His ouster means it is likely the Conservatives will now swing more to the right.

“What’s next is they lose the next election,” said one gloomy former senior Conservative official.

Potential leadership candidates include the party’s finance critic Pierre Poilievre, a lawmaker who is a favorite of the right wing. He strongly backed a protest by truckers opposed to COVID-19 vaccine mandates which has paralyzed central Ottawa.

“You need only take a walk down the street in front of Parliament to see how divided we are,” O’Toole said, urging his party to “realize that our country is divided and people are worried.”

O’Toole initially distanced himself from the demonstration, which insiders said had infuriated some legislators at a time when they were already unhappy with his performance.

“The lack of contrition and humility from Mr. O’Toole and how he conducted himself after the election … is ultimately what did him in. There was no plan for how they were going to do things better,” said Jamie Ellerton, a conservative strategist and principal at Conaptus, a public relations firm.

O’Toole’s ouster is potentially good news for Trudeau, who has now seen off four Conservative leaders and can govern while his rivals are focused on succession issues. No date for a leadership convention has been set.

Trudeau heads a minority government, though he can rely on steady support from the leftist New Democrats to pass legislation. He thanked O’Toole for his service.

“This might be good for now but nobody can say it’s good for long,” said the strategist, who requested anonymity given the sensitivity of the situation.

The current Conservative Party was created in 2003 through a merger of a center-right party and populist right-wing party, and some fret about a split. After the vote, legislators stressed the party was united.

“There is never a good time for a lot of things but sometimes you have to deal with them,” Pierre Paul-Hus, the party’s public safety critic, told reporters. Legislators will select an interim chief later on Wednesday.