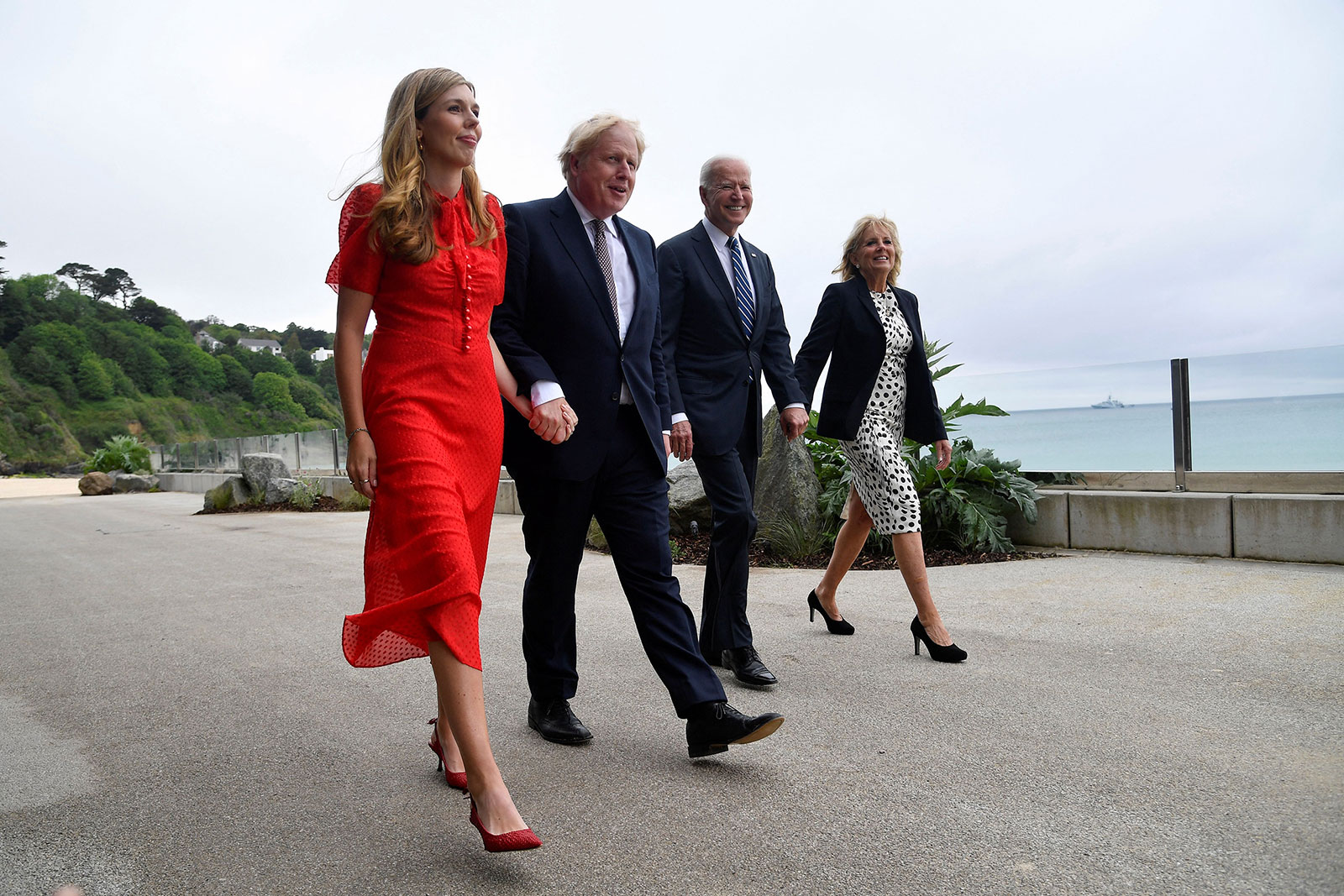 President Biden’s first in-person engagement with UK Prime Minister Boris Johnson is underway now in southwest England. They are expected to commit to working to open up travel between the US and the UK and lifting restrictions that were put in place to stop the spread of Covid-19, according to a source familiar with the matter.

The two leaders exchanged pleasantries, but otherwise did not speak substantively to reporters ahead of the talks.

Biden said he’d been to the United Kingdom many times, but it was his first stop as President. Biden, noting it was a pleasure to meet Johnson’s wife, quipped that both he and Johnson had “married up.”

“It gorgeous. I don’t want to go home,” Biden said, according to pool reporters.

The foursome climbed a set of stairs to go inside, where the old Atlantic Charter had been put on display for the leaders to view.

The leaders are planning to sign an updated version of the document that better reflects the 21st-century world. The new Atlantic Charter will be modeled on the historic declaration made by President Franklin D. Roosevelt and Prime Minister Winston Churchill in 1941 that set out American and British goals for the world after the end of World War II, according to national security adviser Jake Sullivan.

As they viewed the charter, Biden and Johnson were both wearing masks. Outside, the leaders and their wives were mask-less.

The new charter will outline priorities, values and challenges that include defending democracy, reaffirming the importance of collective security, building a more fair and sustainable global trading system, combating cyberattacks, addressing the climate crisis, protecting biodiversity and bringing an end to the coronavirus pandemic, according to a source familiar with the matter.

Some more background: Personal dynamics between the leaders of the United States and Britain have often played a key role in the “special relationship” between the two trans-Atlantic powers. Roosevelt and Churchill were famously close, as were Prime Minister Tony Blair and US President Bill Clinton, and then, to the surprise of many, Blair and US President George W. Bush during the Iraq War.

Johnson was a favorite of former US President Donald Trump, who praised him for his support for Brexit, Britain’s withdrawal from the European Union. During the 2020 campaign, Biden referred to Johnson as a “physical and emotional clone” of Trump.

Biden still holds deep reservations about Britain’s exit from the European Union — a move Johnson championed and has advocated for as prime minister. Biden is expected to press Johnson on the issue during their talks, and specifically on how it might affect the Good Friday Agreement in Northern Ireland.

Hear what the two leaders said during their meeting: