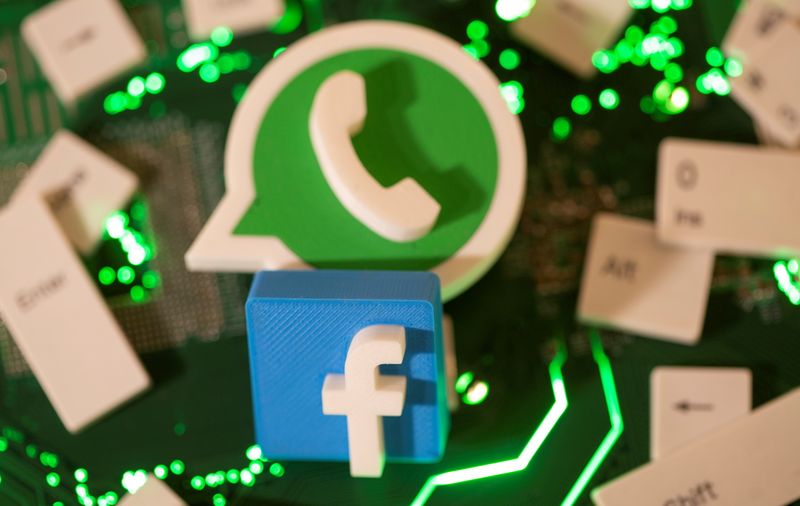 By Elizabeth Culliford and Kanishka Singh

(Reuters) – The Taliban’s rapid takeover of Afghanistan poses a new challenge for big U.S. tech companies on handling content created by a group considered to be terrorists by some world governments.

Social media giant Facebook confirmed on Monday that it designates the Taliban a terrorist group and bans it and content supporting it from its platforms.

But Taliban members have reportedly https://wapo.st/3m5iuAZ continued to use Facebook’s end-to-end encrypted messaging service WhatsApp to communicate directly with Afghanis despite the company prohibiting it under rules against dangerous organizations.

A Facebook Inc spokesperson said the company was closely monitoring the situation in the country and that WhatsApp would take action on any accounts found to be linked with sanctioned organizations in Afghanistan, which could include account removal.

On Twitter Inc, Taliban spokesmen with hundreds of thousands of followers have tweeted updates during the country’s takeover.

Asked about the Taliban’s use of the platform, the company pointed to its policies against violent organizations and hateful conduct but did not answer Reuters questions about how it makes its classifications. Twitter’s rules say it does not allow groups who promote terrorism or violence against civilians.

The Taliban’s return has raised fears it will crack down on freedom of speech and human rights, especially women’s rights, and that the country could become a haven once again for global terrorism.

These include controversial blocks of former U.S. President Donald Trump for inciting violence around the Jan. 6 Capitol riot and bans on Myanmar’s military amid a coup in the country.

Facebook, which was long criticized for failing to combat hate speech in Myanmar, said the coup escalated risks of offline harm and its history of human rights violations contributed to the ban on the ruling military or Tatmadaw.

The companies, which have come under fire from global lawmakers and regulators for their outsized political and economic influence, often depend on state designations or official international recognitions to determine who is allowed on their sites.

These also help determine who might be verified, allowed official state accounts or may receive special treatment for rule-breaking speech due to newsworthiness or public interest loopholes.

However, the differences among the tech companies’ stances suggest the approach is not uniform.

Alphabet Inc’s YouTube, asked whether it has a ban or restrictions on the Taliban, declined to comment but said the video-sharing service relies on governments to define “Foreign Terrorist Organizations” (FTO) to guide the site’s enforcement of its rules against violent criminal groups.

YouTube pointed to the U.S. State Department’s list of FTO’s of which the Taliban is not a member. The U.S. instead classifies the Taliban as a “Specially Designated Global Terrorist,” which freezes the U.S. assets of those blacklisted and bars Americans from working with them.

Complicating matters further, though most countries show little sign they will recognize the group diplomatically, the Taliban’s position on the world stage may yet shift as they cement control.

“The Taliban is somewhat an accepted player at an international relations level,” said Mohammed Sinan Siyech, a researcher on security in South Asia and doctoral candidate at the University of Edinburgh, pointing to talks China and the United States have held with the group.

“If that recognition comes in, then for a company like Twitter or Facebook to make a subjective decision that this group is bad and we will not host them poses complications.”

(Reporting by Elizabeth Culliford in London and Kanishka Singh in Bengaluru; Additional reporting by Daphne Psaledakis in Washington D.C.; Editing by Kenneth Li and Sam Holmes)