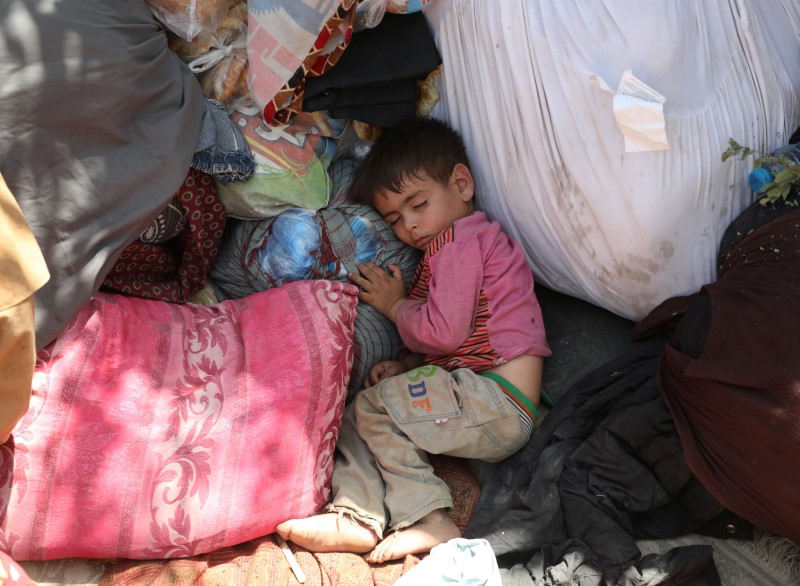 An internally displaced child from northern provinces, who fled from his home due the fighting between Taliban and Afghan security forces, sleeps in a public park that they use as shelter in Kabul, Afghanistan, August 10, 2021.REUTERS/Stringer

KABUL (Reuters) -Taliban fighters tightened their grip on captured territory in Afghanistan on Tuesday as civilians hid in their homes and a pro-government commander vowed to fight to the death to defend Mazar-i-Sharif, the biggest city in the north.

President Ashraf Ghani called on regional strongmen to support his government after a stunning string of Taliban gains as U.S.-led foreign forces pull out, while a U.N. official said advances made in human rights over the past 20 years were in danger of being erased.

In the capital, Kabul, Ghani’s aides said he was seeking help from regional militias he has squabbled with over the years to rally to the defence of his government. He also appealed to civilians to defend the country’s “democratic fabric”, aides said.

In the town of Aibak, capital of Samangan province on the main road between Mazar-i-Sharif and Kabul, Taliban fighters were consolidating their control, moving into government buildings, residents said.

Most government security forces appeared to have withdrawn.

“The only way is self-imposed house arrest or to find a way to leave for Kabul,” said Sher Mohamed Abbas, a provincial tax officer, when asked about living conditions in Aibak.

“But then even Kabul is not a safe option anymore,” said Abbas, sole bread winner for a family of nine.

Abbas said the Taliban had arrived at his office and told workers to go home. He and other residents said they had not seen nor heard fighting on Tuesday.

For years, the north was the most peaceful part of the country with only minimal Taliban presence.

The militants’ strategy appears to be to take the north, as well as main border crossings in the north, west and south, and then close in on Kabul.

The government has withdrawn forces from hard-to-defend rural districts to focus on holding major population centres while officials have appealed for pressure on neighbouring Pakistan to stop Taliban reinforcements and supplies flowing over the porous border. Pakistan denies backing the Taliban.

The United States has been launching air strikes in support of government troops but said it was up to Afghan forces to defend their country.

Taliban and government officials have confirmed that the Islamists have overrun six provincial capitals in recent days in the north, west and south.

Security forces in Pul-e Khumri, capital of Baghlan province, to the southeast of Aibak, were surrounded as the Taliban closed in on the town at a main junction on the road to Kabul, a security official said.

Gulam Bahauddin Jailani, head of the national disaster authority, told Reuters there was fighting in 25 of the 34 provinces and 60,000 families had been displaced over the past two months, with most seeking refuge in Kabul.

About 400,000 Afghans had been displaced in recent months and there had been an increase in numbers of people fleeing to Iran over the past 10 days, a senior EU official said.

The Taliban controlled 65% of Afghan territory, were threatening to take 11 provincial capitals and trying to deprive Kabul of its traditional support from forces in the north, the official said.

U.N. human rights chief Michelle Bachelet said reports of violations that could amount to war crimes and crimes against humanity were emerging, including “deeply disturbing reports” of the summary execution of surrendering government troops.

“People rightly fear that a seizure of power by the Taliban will erase the human rights gains of the past two decades,” she said.

The Taliban, ousted in the weeks after the Sept. 11, 2001, attacks on the United States, were in a position to advance from different directions on Mazar-i-Sharif. Its fall would deal a devastating blow to Ghani’s government.

Atta Mohammad Noor, a northern militia commander, vowed to fight to the end, saying there would be “resistance until the last drop of my blood”.

“I prefer dying in dignity than dying in despair,” he said on Twitter.

India sent a flight to northern Afghanistan to take its citizens home, officials said, asking Indians to leave. The United States and Britain have already advised their citizens to leave Afghanistan.

The United States will complete the withdrawal of its forces at the end of this month under a deal with the Taliban, which included the withdrawal of foreign forces in exchange for Taliban promises to prevent Afghanistan being used for international terrorism.

The Taliban promised not to attack foreign forces as they withdraw but did not agree to a ceasefire with the government. Intermittent talks between the Afghan rivals have been fruitless.

(Reporting by Afganistan bureau, additional reporting by Emma Farge in Geneva and Sabine Siebold and John Chalmers in Brussels;Editing by Robert Birsel and Nick Macfie)