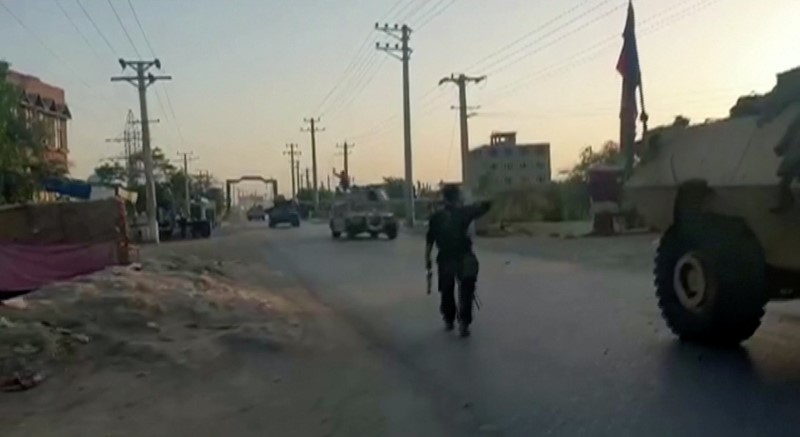 Tanks arrive at battlefield, in Kunduz, Afghanistan July 7, 2021 in this still image taken from a video. REUTERS TV via REUTERS

The Taliban, fighting to reimpose strict Islamic law after their 2001 ouster, have stepped up their campaign to defeat the government as foreign forces withdraw after 20 years of war.

On Monday, they took Aybak, capital of the northern province of Samangan.

“Right now the Taliban are fighting with Afghan forces to capture the police headquarters and compound of the provincial governor,” said Ziauddin Zia, a lawmaker in Aybak.

“Several parts of the capital have fallen to the Taliban.”

They had already taken the northern provincial capital of Kunduz and Lashkar Gah, capital of southwestern Helmand province.

The Taliban gains have sparked recriminations over the withdrawal of foreign forces. British Defence Secretary Ben Wallace told the Daily Mail that the accord struck last year between the United States and the Taliban was a “rotten deal”.

Wallace said his government had asked some NATO allies to keep their troops in Afghanistan once the U.S. troops departed, but failed to garner enough support.

“Some said they were keen, but their parliaments weren’t. It became apparent pretty quickly that without the United States as the framework nation it had been, these options were closed off,” Wallace said.

Germany’s defence minister rejected calls for its soldiers to return to Afghanistan after Taliban insurgents took Kunduz where German troops were deployed for a decade.

Afghan commandoes had launched a counter-attack to try to beat back Taliban fighters who overran Kunduz, with residents fleeing the conflict describing the almost constant sound of gunfire and explosions.

A Taliban spokesman warned the United States on Sunday against intervening following U.S. airstrikes to support beleaguered Afghan government forces. The United States has vowed to pull out most troops by the end of the month, ending its longest war.

In the West, near the border with Iran, security officials said heavy fighting was under way on the outskirts of Herat. Arif Jalali, head of Herat Zonal Hospital, said 36 people had been killed and 220 wounded over the past 11 days. More than half of the wounded were civilians, he said, and women and children were among the dead.

UNICEF in a statement on Monday said 20 children were killed and 130 children had been injured in southern Kandahar province in the last 72 hours.

In Helmand, a hotbed of Taliban activity, security officials reported a loud explosion in Lashkar Gah on Monday morning.

The insurgents have taken dozens of districts and border crossings in recent months and put pressure on several cities.

“U.S. forces have conducted several airstrikes in defence of our Afghan partners in recent days,” Maj. Nicole Ferrara, a U.S. Central Command spokesperson, told CNN on Sunday, without specifying where those strikes were.

In Kunduz, many desperate families, some with young children and pregnant women, abandoned their homes, hoping to reach the relative safety of Kabul, 315 kilometres (200 miles) to the south – a drive that would normally take around ten hours.

Ghulam Rasool, an engineer, was trying to hire a bus to get his family to the capital as the sound of gunfire reverberated through the streets of his hometown.

“We may just be forced to walk till Kabul, but we are not sure if we could be killed on the way …ground clashes were not just stopping even for 10 minutes,” Rasool told Reuters.

He and several other residents, and a security official, said Afghan commandoes had launched an operation to clear the insurgents from Kunduz.

Thousands were trying to enter Kabul, even after the city has witnessed attacks in diplomatic districts.

Over the weekend, the insurgents also occupied government buildings in the northern provincial capital of Sar-e-Pul, driving officials out of the main city to a nearby military base, Mohammad Noor Rahmani, a provincial council member, said.

On Sunday evening, Ashraf Ayni, representative in parliament for Takhar province, said its capital, Taloqan, had fallen to the Taliban who had freed prisoners.

And there conflicting reports on whether they had seized Sheberghan, the capital of northern Jawzjan.