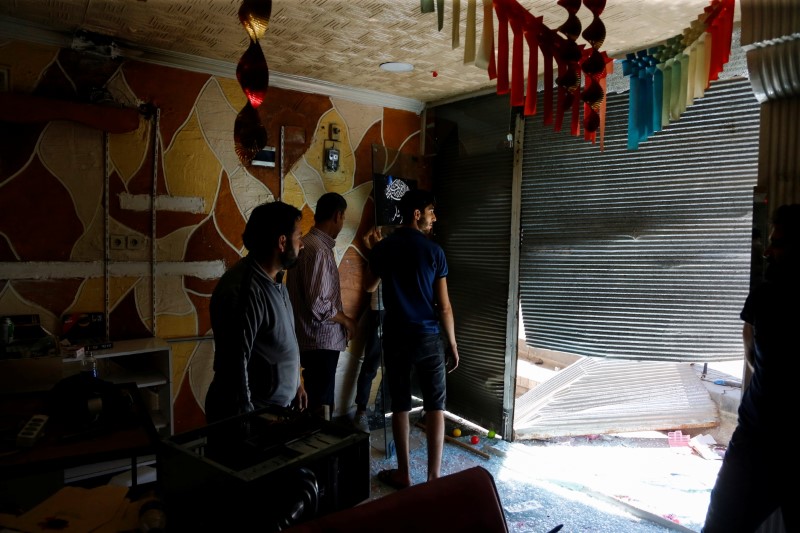 A Syrian shop owner and his friends check the damage in his shop after a crowd of Turks attacked shops and homes belonging to Syrians overnight, in the wake of a street fight that led to a Turkish youth being fatally stabbed, in Ankara, Turkey August 12, 2021. REUTERS/Cagla Gurdogan

ANKARA (Reuters) – A crowd of Turks attacked shops and homes belonging to Syrians in the Turkish capital Ankara overnight in the wake of a street fight that led to a Turkish youth being fatally stabbed, a witness and media reports said.

The windows of Syrians’ shops and homes were smashed and a vehicle was overturned and set on fire during the unrest in the Altindag district of Ankara. Police fired into the air at one point in an attempt to halt the violence, the witness said.

The trouble occurred after a fight between Turkish and Syrian youths on Tuesday. Broadcaster CNN Turk said one Turkish youth had died and one was wounded.

Two foreigners have been charged and remanded in custody over the death of the youth, state-owned Anadolu news agency reported.

“Which of our traditions involves stoning people’s houses at night? Many refugees contacted us and said they were worried for their children’s lives,” he said.

He shared a photo of a young child, their face covered with blood after being injured by a stone thrown through a window, who he said had been brought to hospital for treatment.

“Let us cool this fire. It is of no benefit to anybody.”

The Ankara governor’s office said on Twitter overnight that “protests and incidents” which occurred on Wednesday evening had ended.

Turkey hosts some 3.7 million Syrian refugees and the latest unrest comes amid concerns about growing numbers of Afghan refugees arriving in eastern Turkey from Iran amid the conflict in Afghanistan.