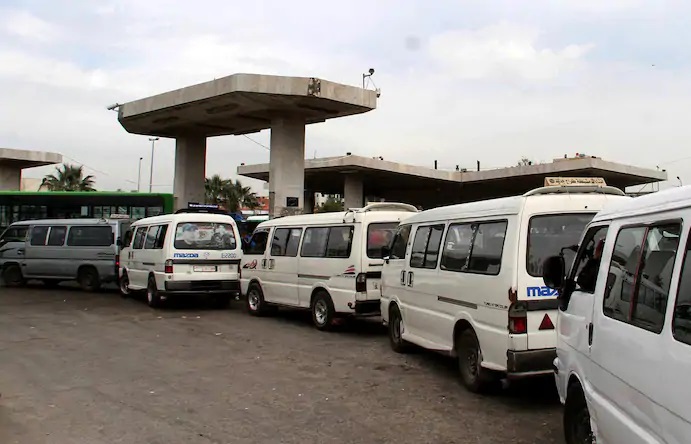 FILE – In this file photo released on April 7, 2019, by the Syrian official news agency SANA, shows vans queuing to fill their tanks with fuel, at a gas station in Daraa, south Syria. On Sunday, Jan. 10, 2021, Syria’s petroleum ministry blamed U.S. sanctions for forcing it to cut by up to 24% its distribution of fuel and diesel because of delays in arrival of needed supplies. (SANA via AP, File) (Associated Press)

DAMASCUS, Syria — Syria’s petroleum ministry on Sunday blamed U.S. sanctions for forcing it to cut by up to 24% its distribution of fuel and diesel because of delays in arrival of needed supplies.

The war-ravaged nation already is facing a severe economic crisis that has caused major shortages in wheat and fuel products. Long lines have formed outside of gas stations and bakeries as the government rationed what it has, further deepening the crunch felt by Syrians.

The economic hardship has only intensified during the pandemic, with restrictions designed to limit the spread of coronavirus and tighter U.S. and western sanctions against the government of President Bashar Assad, who remains in office despite a crushing 10-year civil war.

The U.S. and other western countries have intensified sanctions against Assad and his government and allies, blaming them for the killings of hundreds of thousands of civilians during a brutal war that began in 2011 when government troops crushed protests against his rule. Damascus says the sanctions are only making life harder for civilians.

The civil war has torn Syria apart, left more than half of the population displaced and large parts of the country out of government control. It has also crippled the centralized economy, increased unemployment and raised inflation.

Assad’s government relies almost exclusively on crude oil from Iran, a key ally of Damascus which has also sided with Syrian troops in the war. Tightening U.S. sanctions on Iran have added to the crisis in Syria.

A financial crisis in neighboring Lebanon, which had offered an economic lifeline for isolated Syria and a smuggling route, only made matters worse.

Once before last year, the Syrian government announced delays in supplies amid shortages and partially lifted subsidies on certain fuel products.

In a statement on Sunday, the Syrian ministry of petroleum and mineral resources said it will cut by 17% the amount of diesel and 24% the amount of fuel it is distributing to the government-controlled provinces until new supplies arrive. It offered no date for lifting the rationing.

“These measures are because of delays in the arrival of fuel products supplies because of the unjust U.S. sanctions against our country,” the ministry said. “They are to ensure that we can continue to secure the needs of our citizens and manage the available reserves as best as possible.”

Long queues at gas stations and hours of waiting have become a daily reality, and many opted for walking or parked their private vehicles. Others have reported reducing consumption of diesel for heating by more than half in the cold winter months.

Kayed Youssef, a 54-year old government employee in Damascus, said he has not moved his car in ten days. “I only move it in extreme necessity,” he said.

It gets harder for those outside the capital. In the southwestern city Sweida, fuel has not arrived since Thursday, Syrian Snack, an online news site reported.

The head of the public company for fuel products distribution, Ahmed Shamaat, said the reduction will be temporary until supplies arrive. He declined to give a date though, saying they are due to arrive “soon… depending on circumstances.”