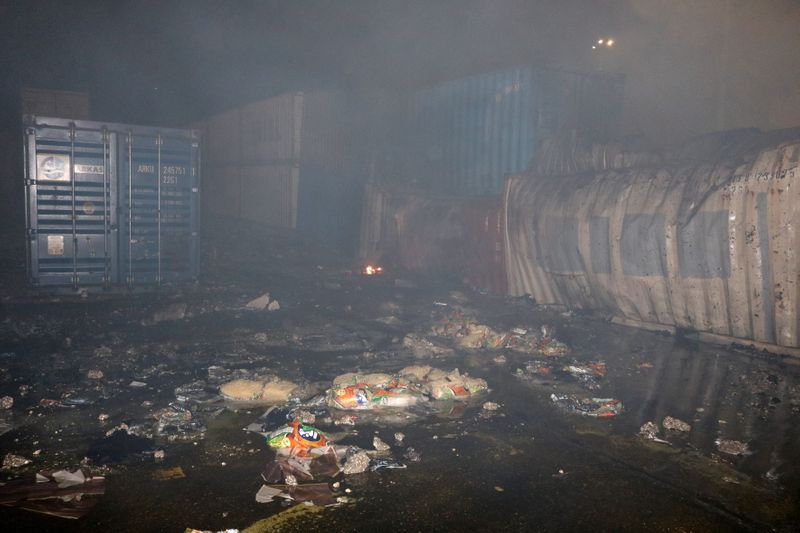 A view shows the damage in a container storage area, after Syrian state media reported an Israeli air strike on the Syrian port of Latakia, Syria, in this handout picture released by SANA on December 7 , 2021. SANA/Handout via REUTERS ATTENTION EDITORS – THIS IMAGE WAS PROVIDED BY A THIRD PARTY. REUTERS IS UNABLE TO INDEPENDENTLY VERIFY THIS IMAGE

CAIRO (Reuters) – Israel carried out an air strike on the Syrian port of Latakia on Tuesday, causing a fire in a container storage area, Syrian state media reported, in what appeared to be the first such Israeli attack on the facility.

An Israeli military spokesperson declined to comment on the reports. The Syrian reports did not mention any casualties.

Israel has mounted frequent attacks against what it has described as Iranian targets in Syria, where Tehran-backed forces including Lebanon’s Hezbollah have deployed over the last decade to support President Bashar al-Assad in Syria’s war.

Citing a military source, state news agency SANA said Israel had mounted an “aerial aggression” at 1:23 a.m., firing a number of missiles targeting the container storage area at the port and setting some on fire.

A source familiar with port operations said it was the first time Israel had attacked the facility on Syria’s Mediterranean coast. Latakia, Syria’s main commercial port, brings in a considerable amount of cargo from Iran, the source said.

Images posted by SANA showed flames and smoke in the container area and a fire truck at the scene.

Ismail Hilal, the governor of Latakia, said fire fighters had put out the flames and were working to cool the site, SANA reported. State television said five explosions rocked the city.

Russia, which has been Assad’s most powerful ally during the war, operates an air base at Hmeimim some 20 km (12 miles) away from Latakia.