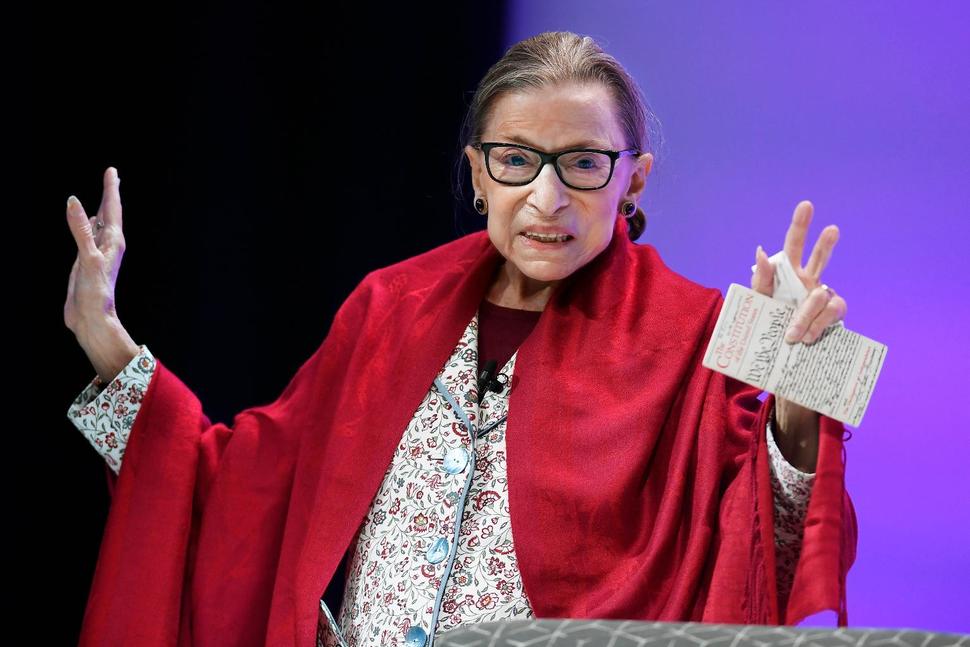 In her last years on the Supreme Court, Justice Ruth Bader Ginsburg moved slowly. She was always the last justice to exit the courtroom, with Justice Clarence Thomas helping her down the steps from the Supreme Court bench. But Ginsburg, who died in September at age 87, was known for her speed at something: writing opinions.

In a new, short remembrance for The Supreme Court Historical Society, Thomas says Ginsburg’s “efficiency became a source of humorous banter as well as a thing of legend” among her colleagues.

Ginsburg described herself as “Rapid Ruth” when it came to opinion writing. And because she was so fast in writing her own opinions and so speedy in responding to draft opinions circulated by colleagues, other justices always got back to her as quickly as possible, said Thomas, who served with Ginsburg longer than any other justice.

“It was as though we all owed it to her to reciprocate her conscientiousness. I cannot recall a single colleague who felt burdened by this. In fact, it often served as a source of laughter. When we discussed circulating opinions, she might quietly note that several colleagues had not responded to her opinion that circulated a day or two before. And, because it was her opinion, we would laughingly chide the ‘tardy’ colleague,” Thomas wrote.

Thomas first worked with Ginsburg when they served together on the U.S. Court of Appeals for the District of Columbia Circuit. Ginsburg had already been a judge on the court for nearly a decade when Thomas arrived in 1990, and he left for the Supreme Court just 19 months later. But he says Ginsburg invited him to dinner and they were assigned to the same three-judge panels a few times.

Before Ginsburg joined the Supreme Court in 1993, Thomas remembered, another justice asked his opinion of her. He gave her rave reviews based on their brief time together on the appeals court.

“In my short time as a judge and as a member of the Court, I had learned that, unlike elsewhere in the city, disagreement was not the controlling factor in relationships among judges. Character and work ethic were far more important. I expected Judge Ginsburg would be an excellent colleague, and her tenure converted my assessment to a prophecy,” he wrote.

On the court, the liberal Ginsburg and conservative Thomas disagreed more often than almost any other pair of justices. In her last term on the court, for example, they agreed with each other only 49% of the time. Only Justice Sonia Sotomayor disagreed with Thomas more often, according to statistics compiled on the SCOTUSblog website.

“Justice Ginsburg and I often disagreed, but at no time during our long tenure together were we disagreeable with each other. She placed a premium on civility and respect,” Thomas wrote.

While civil, disagreements between justices can sometimes have an edge to them. A back-and-forth between Justice Brett Kavanaugh and Justice Elena Kagan in an opinion this week seemed more heated than usual.

It was a contrast, at least, from 2018 when, after Kavanaugh’s bruising confirmation, Kagan seemed to welcome him to the court. The justices, who sit next to each other, often seemed to chat warmly on the bench.

But this week, the pair was on opposite sides of an opinion about extending the impact of a 2020 Supreme Court decision. The 2020 opinion said criminal juries must be unanimous to convict. The question this time was whether that decision should be made retroactive, benefiting more people. Kavanaugh said no in a 6-3 decision for the court’s conservatives.

His opinion steamed Kagan, who wrote a dissent for the court’s three liberals. She hurled what amounts to a legal insult at Kavanaugh’s opinion, saying it “discards precedent without a party requesting that action.”

And that was just the beginning of the barb-slinging. Kavanaugh, for his part, underscored that Kagan would have kept in place a 1972 decision approving non-unanimous juries. And he wrote that criminal defendants are better off after the two rulings than they would have been if Kagan’s views won out. Kagan responded by accusing Kavanaugh of treating “judging as scorekeeping” while Kavanaugh called Kagan’s rhetoric “misdirected.”

The justices have many more opinions to issue before they take a summer break. Whether Kagan and Kavanaugh will find common ground elsewhere or whether Kagan and her liberal colleagues will lose many more decisions 6-3 remains to be seen. But sometimes one charged disagreement can signal more to come.

The most prolific author on the Supreme Court will have a new book in September.

Justice Stephen Breyer’s sixth book comes out then. The question is whether he’ll still be a sitting justice when it’s published. Some liberals have urged the 82-year-old justice to retire now, so that President Joe Biden can replace him with another liberal while Democrats have control of the Senate.

But Breyer said in a speech in April that judges don’t make decisions with politics in mind. That speech is being published in book form with the title “The Authority of the Court and the Peril of Politics.” A summary of the book on Harvard University Press’ website says that if public trust in the judiciary is currently in decline, “the solution is to promote better understanding of how the judiciary actually works: overwhelmingly, judges adhere to their oath to avoid considerations of politics and popularity.” So would Breyer consider making a politically timed retirement? Maybe, but maybe not.

The court’s other authors include Justice Sonia Sotomayor, the author of four books (eight if you count that each has a Spanish translation). Justice Neil Gorsuch and Justice Clarence Thomas have each published one book as a justice. The court’s newest member, Amy Coney Barrett, also has a book deal.