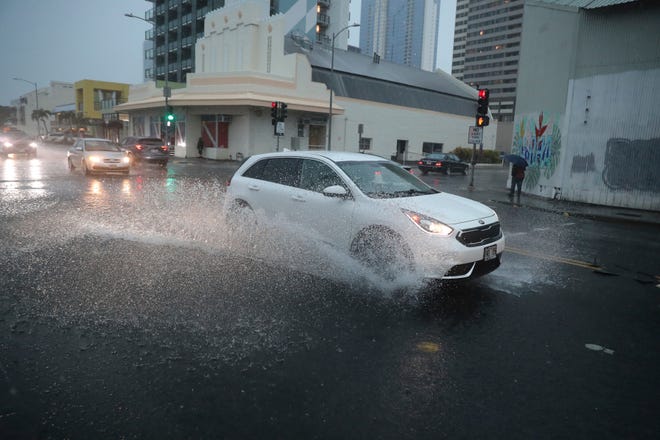 A powerful storm system pounded Hawaii on Monday with heavy rain, and forecasters warned of a chance for “dangerous” and “catastrophic” flooding in some parts of the state throughout Monday night and well into Tuesday.

More than 2 feet of rain is possible in some areas; widespread amounts of 10 to 15 inches are likely.

Flood watches have been issued for all of the islands and will remain in effect until Tuesday, AccuWeather said. Oahu and Kauai islands face the greatest threat of flash flooding, according to the National Weather Service.

Hawaii Gov. David Ige declared a state of emergency for the entire state Monday afternoon and urged residents to prepare for major flooding, landslides, road closures and damage to homes.

“Now is the time to make sure you have an emergency plan in place and supplies ready should you need to move away from rising water,” the governor said in a news release.

The state of emergency will continue through Dec. 10.

Such heavy rain could cause flooding in areas that don’t normally flood, the National Weather Service warned, and numerous landslides are expected.

“Low spots in roads will become dangerous and impassable due to severe runoff. Debris in streams and gulches may clog bridges and culverts resulting in dangerous flooding,” the Weather Service said.

On Oahu, where four shelters had been opened, most of the beaches in Waikiki were empty Monday as only a few people walked with umbrellas during passing heavy showers. Roadways were flooding in the area and cars crept through downtown as water gushed out of manhole covers.

On Maui, power outages and flooding already have been reported, with more than a foot (30 centimeters) of rain falling in some areas.

The relentless rain forced three couples from the U.S. mainland to postpone their Maui elopements, said Nicole Bonanno, owner of Bella Bloom Floral, a wedding florist and boutique in Wailea.

As a precaution, the city and county of Honolulu planned to open four emergency shelters ahead of the Kona low storm, which is expected to hit Oahu starting tonight, Honolulu mayor Rick Blangiardi tweeted Monday morning.

Kona low storms are a type of seasonal cyclone in the Hawaiian Islands, usually formed in the winter from winds coming from the westerly “Kona” direction, the weather service said. Kona lows often bring about wet and unsettled weather.

Although the blizzard warning for the summits of Hawaii’s Big Island was canceled early Monday, it continued to snow there. An additional 4 inches of snow was possible, the Weather Service said.

“Although Hawaii has the reputation of year-round warmth, snow actually makes a yearly appearance atop some of its highest peaks,” AccuWeather meteorologist Lauren Hyde said.

Blizzard warnings for Hawaii are rare but not unheard of. The last blizzard warning issued by the Weather Service in Hawaii was more than 3½ years ago.