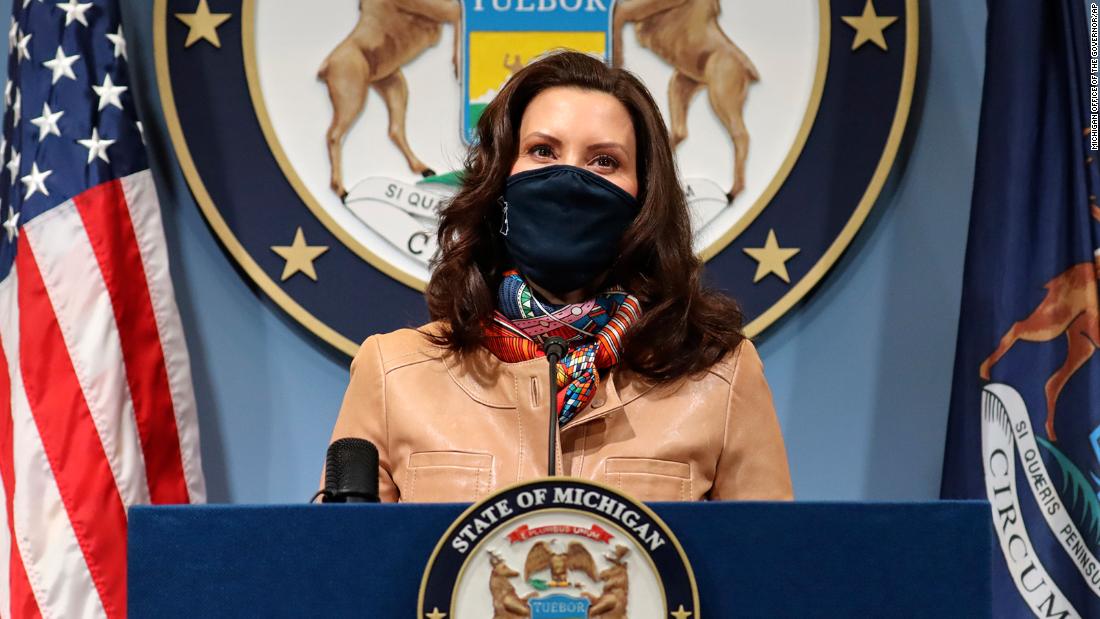 Although President Joe Biden and Whitmer are close allies, the two now find themselves in the middle of an awkward impasse that’s complicated by a global pandemic and national clamor for vaccines.
Whitmer has made several appeals to the White House for more vaccine doses to combat the surge, including a direct one to Biden during a call that lasted between 20 and 30 minutes last week. But Whitmer, a strong supporter of Biden’s who was once under consideration to be his vice president, seems unlikely to succeed in her quest for more doses, something Biden’s top health advisers made clear Monday, as one warned they aren’t going to play “whack-a-mole” with vaccines.
“We have to remember the fact that in the next two to six weeks, the variants that we’ve seen in Michigan, those variants are also present in other states. So our ability to vaccinate people quickly in each of those states, rather than taking vaccines and shifting it to playing whack-a-mole, isn’t the strategy that public health leaders and scientists have laid out,” said Andy Slavitt, a senior adviser to the President on coronavirus.
Signaling the tensions between the two usual allies, after Whitmer made her direct request to Biden, a federal health official said privately that her state had not maxed out its orders from the weekly allocation provided by the federal government, something a state official later denied.
“We have ordered every vaccine that we’ve ever been allocated,” the state official said.
The back-and-forth has resulted in a delicate dance between the White House and one of Biden’s most ardent allies.
US Centers for Disease Control and Prevention Director Dr. Rochelle Walensky said Monday that Michigan needed to shut down to deal with the rise in cases underway, not get more vaccines. She argued that the delay from when vaccines are administered to when they become effective would make it impractical. It takes about two weeks after the second dose of Pfizer and Moderna and about two weeks after the one-dose Johnson & Johnson vaccine before people are considered fully vaccinated.
Walensky said Michigan should enact tougher restrictions to combat the surge.
“The answer is not necessarily to give vaccine,” Walensky said. “The answer to that is to really close things down, to go back to our basics, to go back to where we were last spring, last summer, and to shut things down — to flatten the curve, to decrease contact with one another.”
“I think if we tried to vaccinate our way out of what is happening in Michigan, we would be disappointed that it took so long for the vaccine to work, to actually have the impact,” Walensky added.
Despite Walensky’s advice that Michigan “shut things down,” the state official told CNN that Whitmer didn’t have the authority to do so, pointing to how the Michigan Supreme Court had ruled last October that the governor had no authority to issue or renew executive orders relating to Covid-19 beyond April 30, 2020.
Whitmer encouraged residents on Friday to voluntarily take a two-week pause on indoor dining, gatherings and school athletics but did not require those changes, saying, “Policy change alone won’t change the tide.”
Michigan still has a mask mandate in place and restrictions on indoor dining, where capacity is limited to 50%. The state official told CNN on Monday that the restrictions follow current CDC guidelines and touted them as some of the toughest in the Midwest.
Although denying Whitmer’s requests for more doses, the Biden administration has surged additional resources for testing, treatments and Federal Emergency Management Agency vaccinators to help the state dole out doses. White House officials told CNN they are working closely with the governor and other Michigan officials to help the state combat the surge, which public health officials fear could happen in other states.
Officials have remained in touch with Whitmer’s office, though it does not appear that the governor herself has had any calls with White House officials since she last spoke to the President. The White House holds weekly calls with governors on Tuesdays to preview their expected allotment for the coming week, and Whitmer is scheduled to join this week, two people told CNN.
Whitmer has praised Biden’s handling of the pandemic and contrasted it with former President Donald Trump’s — while suggesting that Biden tweak his.
“By and large, it’s working and they’re going a great job. I would submit, though, that in an undertaking of this magnitude with such consequences, it’s important to recognize where there might need to be some adjustments along the way,” Whitmer said during a CBS interview Sunday.