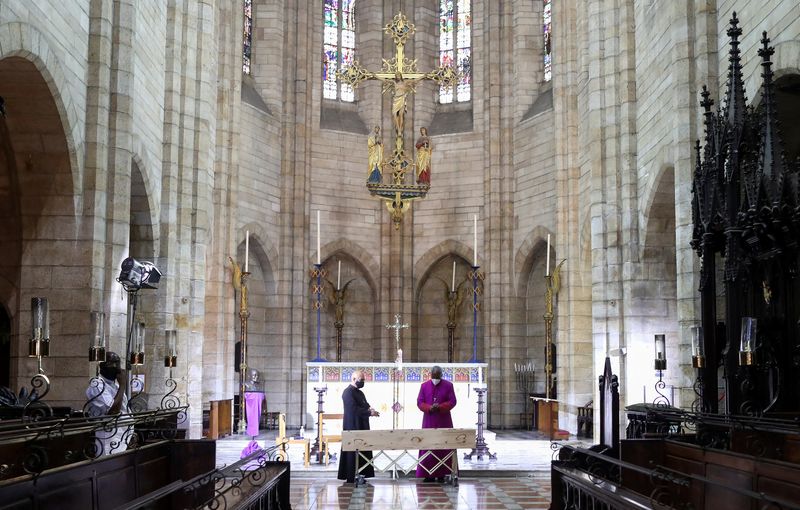 CAPE TOWN (Reuters) – South Africans lined up for a second day on Friday to pay their respects to Archbishop Desmond Tutu, whose body lay in state at St George’s Cathedral in Cape Town where the anti-apartheid hero preached against racial injustice.

Tutu, a Nobel Peace Prize winner widely revered across racial and cultural divides in South Africa for his moral rectitude and principled fight against white-minority rule, died on Sunday aged 90.

Members of the clergy and church wardens lined the street as a guard of honour, waiting for the simple pine coffin with rope handles to arrive, while the St George’s Cathedral marching band filled the air with sounds of drums, flutes and trumpets.

A teary Thandeka Tutu, the eldest daughter, hugged her sisters after climbing out of the hearse, meeting other family members and the clergy at the entrance where six black-robed pall bearers carried the closed coffin inside to an inner sanctuary amid a cloud of incense from an Anglican thurible.

The cathedral’s dean, Father Michael Weeder, told news broadcaster eNCA that Tutu’s body would lay in state in the cathedral through the night after the public viewing ends at 5 p.m. (1500 GMT).

A long line snaked around the cathedral as mourners waited to pay their respects.

Tutu, who requested the cheapest coffin and did not want any lavish funeral expense, will be cremated and his remains interred behind the cathedral pulpit, from which he often used to preach against racial injustice.

(This story corrects in fourth para to say Thandeka Tutu the daughter, not Leah Tutu the widow)