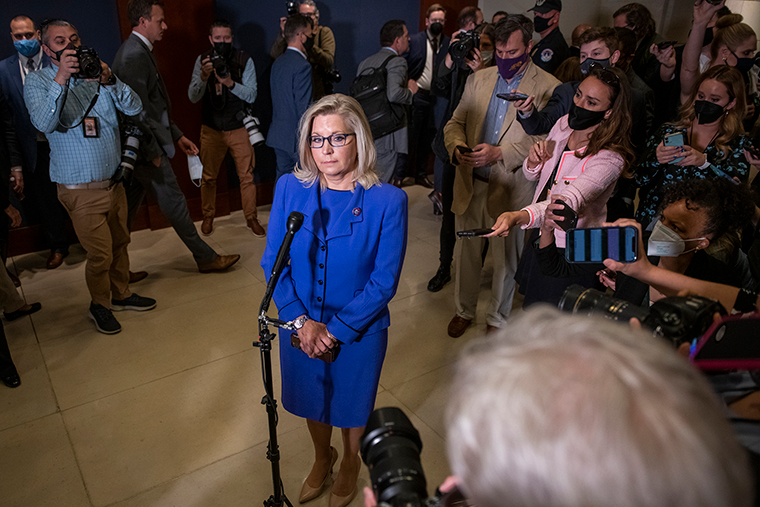 Liz Cheney entered this week knowing it would likely be her last as a member of the House Republican leadership team.

The Wyoming congresswoman fully expected to lose her position as the No. 3 Republican in the House ahead of her conference’s vote on Wednesday, according to a source familiar with her thinking.

But Cheney is also planning to take advantage of her removal as a way to further her fight against former President Trump’s grip over the GOP and continue hammering the message that got her in trouble in the first place: that Trump’s lies about the 2020 election are damaging for her party and the country.

Four months after the Jan. 6 insurrection, Cheney has told friends she “does not believe Trump will just fade away” and that she’s planning to wage a protracted political war – through public statements and in the media – against the former President.

“We must speak the truth. Our election was not stolen. And America has not failed,” said Cheney, who spoke to a nearly empty room as Republican lawmakers cleared out. Republican Rep. Ken Buck was the only member watching Cheney speak in person.

On Wednesday morning, House Republicans ousted Cheney by voice vote behind closed doors on Capitol Hill, and are likely to replace her with New York Rep. Elise Stefanik, who has a less conservative voting record than Cheney but has emerged as one of Trump’s top defenders.

The way Cheney sees it, according to sources, Wednesday’s vote is a chance to put her GOP colleagues on the record: They are either voting for truth and the rule of law or they are voting to continue down the path of lies and insurrection.

“I think it’s a mistake to think that she’s going to fade,” said one person who knows Cheney well.

That will almost certainly continue to bring Cheney into conflict with Trump and House Minority Leader Kevin McCarthy of California, especially if investigations on Capitol Hill and from the Justice Department focus on the events surrounding the Jan.m6 riot. And the prevailing House GOP message of unity over all will continue to heighten the tension between Cheney and the rest of the conference.

But Cheney is also facing her own electoral challenge. In order to be fully effective in her anti-Trump campaign she’ll need to survive a competitive Republican primary for her at-large district in Wyoming next year. With Trump and his allies looking to defeat her there, Cheney’s political future is at stake as she makes her next moves.

The question for Cheney is how large and prominent her platform will be once she is no longer a member of the GOP leadership team. The damage done to her brand within the House Republican conference has been significant since her colleagues last voted 145-61 in favor of keeping her in leadership.