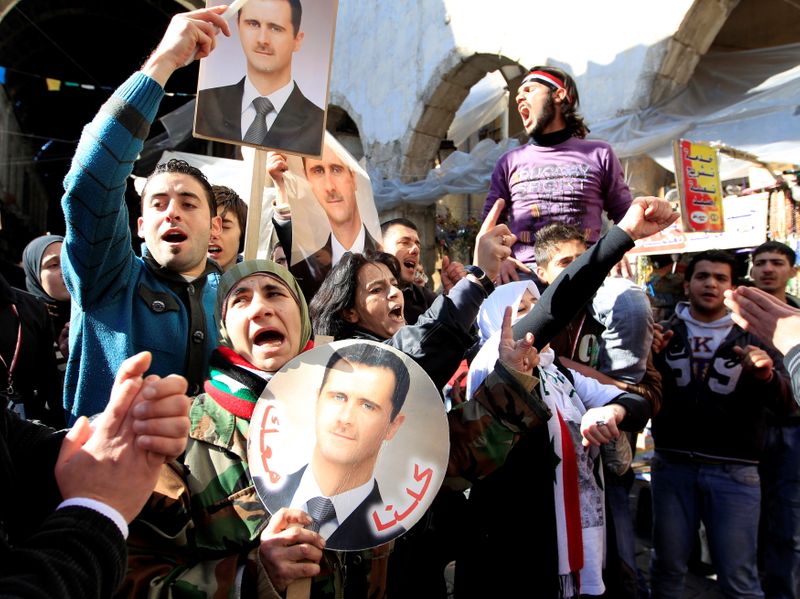 BEIRUT (Reuters) – President Bashar al-Assad, once seen as a reformer but viewed by his many foes as a tyrant after a decade of war and repression, looks set to extend his family’s dynastic rule of Syria further with an election on Wednesday.

Branded “an animal” by the United States for gassing his people and a “great fighter” by Iran for resisting Washington and Israel, Assad, 55, is running for a fourth term.

He faces no serious rival, and the Syrian opposition and Western nations view the election as a farce to rubber-stamp his grip on power.

Assad’s years as president are defined by the conflict that began in 2011 with peaceful protests before spiralling into a multi-sided conflict that has fractured the Middle East country and drawn in foreign friends and enemies alike.

He has stitched much of his state back together with the help of Russia and Iran, aided by the fact that his allies were always more committed to his survival than his enemies were to his defeat.

That was evident in two “red lines” – one declared by an adviser to Iran’s Supreme Leader Ali Khamenei that Assad must remain in power, and the other by former U.S. President Barack Obama over chemical weapons use. Only Iran followed through.

But Syria is an economic ruin. His foes crow that he is “ruling over rubble” despite his success in war.

In an official video in March, Assad said the fight for the economy and its tumbling currency is, “no less important than the military battle”.

From the earliest years of the conflict, Assad set about crushing his enemies with single-minded determination that echoed the way his father, Hafez al-Assad, crushed insurgents in the early 1980s.

Justifying his response to early protests, he compared himself to a surgeon conducting an operation. “Do we say to him: ‘your hands are covered in blood?’ Or do we thank him for saving the patient?” he asked the Syrian parliament in 2012.

His opponents see him as a dictator who burned Syria rather than let power slip from his hands, smashing his cities with barrel bombs and filling his prisons with opponents.

Assad often presents himself as a humble man of the people, appearing in films driving a modest family car and in photographs with his wife visiting war veterans in their homes.

But he always seemed to ooze confidence, even when things looked worst for him, in the months before Russia joined his war effort in 2015, and when he publicly acknowledged that inadequate manpower meant he could not hold all of Syria.

It is a trait recognisable to veteran Arab diplomats who before the war had said Assad’s “arrogant” manner had grated on older leaders of other Middle Eastern states.

Activists and Western countries accused Assad of being responsible for chemical attacks like the sarin strike in Ghouta in 2013 that suffocated hundreds as they slept, of bombing hospitals, schools and marketplaces, mass killings and torture.

He vehemently denied accusations of war crimes and abuse, sometimes saying the evidence had been fabricated, and questioning what he could gain by such evil.

It was accusations of chemical weapons attacks that brought limited Western air strikes against Assad in 2017 and 2018. But his foreign enemies mostly avoided direct battle with his forces.

It contrasts with the decisive military role played by his friends – Russia, Iran and Iranian-backed Lebanese group Hezbollah – through alliances made by his father, whose 30-year rule set in motion many of the dynamics that defined the reign of his son.

His father had groomed another son, Bassel, to succeed him. But when Bassel died in a 1994 car crash, Bashar was transformed overnight from obscure London eye doctor to heir apparent.

“He was like any other person: very humble, very nice, very modest because he was not supposed to be president,” said Ayman Abdel Nour, who knew him at university. “So I didn’t know, and nobody knew, that that guy could become this man.”

At first, on becoming president after his father’s death in 2000, Assad seemed to adopt liberal reforms, a period painted as “the Damascus spring”.

He opened the rigid state-run economy to private companies, released hundreds of political prisoners, allowed free-speaking salons and made overtures to old rivals in the West.

But it soon turned sour.

His police were jailing dissidents within a year and economic reforms contributed to what U.S. diplomats described, in a 2008 embassy cable released by WikiLeaks as “parasitic” nepotism and corruption.

As the elite flaunted their wealth, peasants were driven by drought from villages to city slums where the revolt against Assad would blaze in 2011. His father’s land reforms that had once secured their loyalty were long forgotten.

The high point of Assad’s dalliance with Western leaders was the 2001 visit of British Prime Minister Tony Blair. Two years later, when U.S. soldiers toppled Saddam’s statue on a Baghdad roundabout, Assad feared that they plotted a Syrian sequel.

He opened the border to jihadists, Washington has said, in an effort to bog down the Americans in Iraq and make any new adventure impossible. But Iraq’s civil war spawned the al Qaeda branch that became Islamic State, adding new fire and blood to the war for Assad’s state.