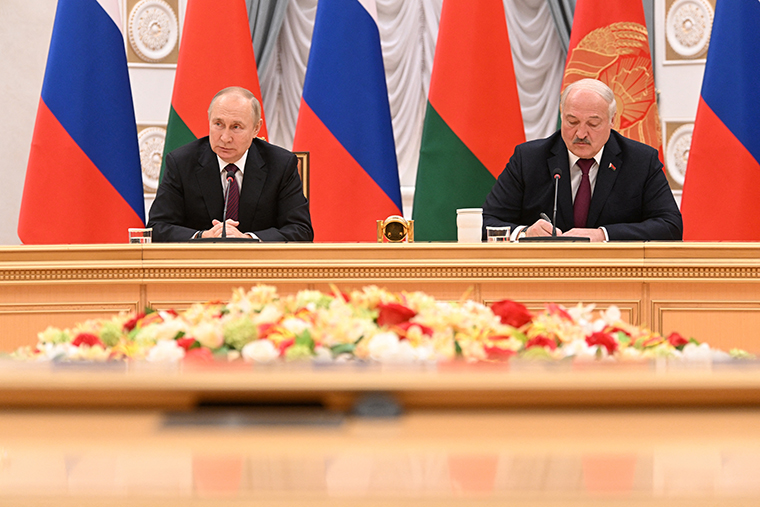 At the end of a visit to Minsk, Russian President Vladimir Putin said Russia and Belarus are working closely to mitigate the effect of western sanctions against both countries.

Speaking at a news conference with his Belarus counterpart, Alexander Lukashenko, Putin said, “Russia and Belarus are working together to overcome the illegitimate steps and sanctions against Russia and Belarus,” and were “working with great confidence in this direction.”

Putin added: “Our countries are closest allies and strategic partners.”

He said there was joint defense planning between Russia and Belarus and that Russia “will do everything for the joint safety of our countries.”

“Such measures are necessary because of the tense situation on the outer borders of the Union state,” he said — an apparent reference to the conflict in Ukraine and possibly the fractious relationship of both countries with Poland.

Putin confirmed that Russia was currently conducting military exercises on the territory of Belarus and that Russia and Belarus were also jointly developing weaponry.

The Russian Defense Ministry said earlier Monday, that “The final assessment of the combat capability and combat readiness of the units will be given by the command at the final stage of coordination — after the battalion tactical exercises have been conducted.’

Russian–Belarusian relations: Russian forces have been based in Belarus for much of the year. In October, the Belarus defense ministry said that 9,000 Russian troops were moving to the country as part of a “regional grouping” of forces to protect its borders. Russian combat aircraft are stationed at or frequently visit several Belarus air bases. Some of the recent cruise missile attacks on Ukraine have originated in Belarus, according to Ukrainian officials.

Putin said that Russia remains the largest investor in Belarus, to the tune of some $4 billion.

For his part, Belarus President Alexander Lukashenko said that 2022 had been a record for Russian-Belarusian relations on all levels and claimed that “sanctions had a painful boomerang effect on their initiators.”

The European Union and the United States have imposed a range of sanctions on Belarus, principally against senior officials of Lukashenko’s government as well as air travel and some exports.

“Because the collective West has reared its ugly head at us, we must coordinate our efforts,” Lukashenko said.

Lukashenko added, “Russia can do without us, but we can’t do without Russia.”