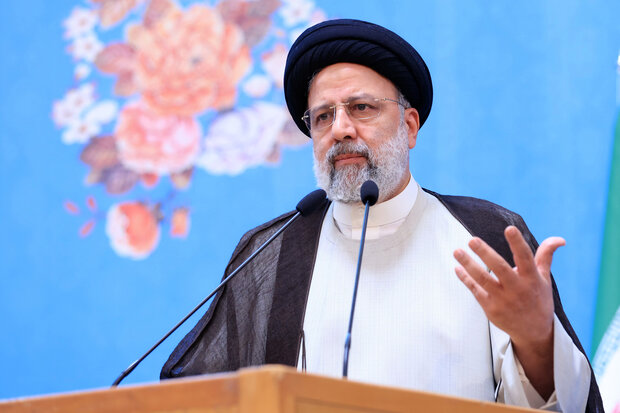 Speaking at the funeral ceremony of the Sacred Defense era unidentified martyrs on Tuesday, President Raeisi offered condolences on the occasion of the martyrdom anniversary of Hazrat Fatima al-Zahra (SA) and hailed her precious role in protecting the legacy of the Prophet Muhammad (PBUH).

Elsewhere in his remarks, Raeisi referred to the recent events in Iran and stated that the colonizers and great powers bring misery and humiliation to the nations through deceptive slogans.

Dubbing the recent unrest in Iran a war of factions, Raeisi blamed the arrogant powers and rumor-mongers for aiming to disappoint the Iranian nation.

“In all fields, the country has made great progress, and the reason for the enemy’s anger is these developments, and all the enemies’ efforts against the Islamic Republic have failed shamefully,” the president added.

Stating that Iran will not show mercy to its enemies, President Raeisi stressed, “The enemies used all their power to prevent Iran’s progress, but today they admit that all their pressures have failed. Today, the enemy is facing a nation that has decided to progress. The nation of Iran under the leadership of the Leader of the Islamic Revolution Ayatollah Seyyed Ali Khamenei has decided to progress.”