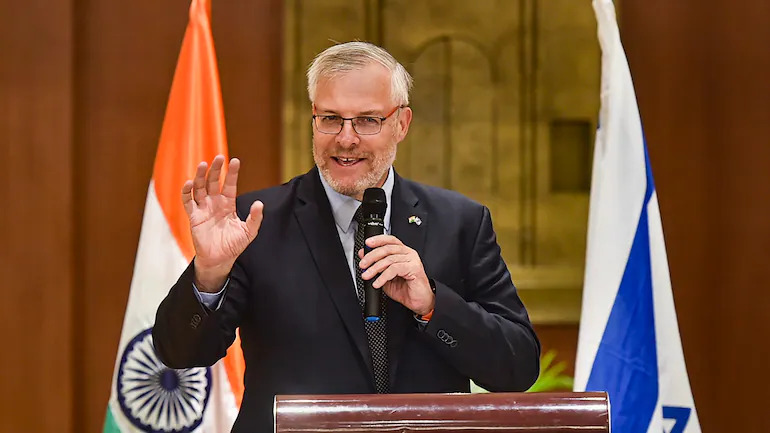 Israel’s new envoy to India, Naor Gilon, has said that while the new Quad (Israel, USA, UAE, India) was not against any one country, one of the major factors for the countries to come together was due to the instability caused by Iran in the region. Naor Gilon’s remarks drew a sharp response from the Iranian embassy in New Delhi.

Addressing his first media briefing in New Delhi on Thursday, Gilon said, “The Abraham Accords have huge potential, and in a way, I believe Iran has a lot to do with this, with the fear and sentiment in the region, and common concerns in the region.”

“We didn’t do it against any one country. There is a huge potential for cooperation, especially economic and in infrastructure…One of the reasons why our relations with the Gulf countries came to the open was, among other things, the fear and shared concern from Iran. Iran is the biggest destabiliser in the region. It is involved in all countries from Yemen to Lebanon to Iraq to Syria to Bahrain. They are involved everywhere, causing instability,” Gilon further said.

The remarks by Israel’s envoy invited a sharp reaction from the Iranian embassy in New Delhi. In a statement issued as a response to the “alleged childish remarks of an adventurous envoy”, the Embassy of Iran said, “Israel, a terror house in which its illegitimate establishment has been rooted in bloodshed, assassination and massacre of Palestinians and other nations in the Middle East, a regime which its scandalous involvement in the current Pegasus espionage together with a history of occupation and invading other territories in Syria and Lebanon as well as its atrocities and war crimes against innocent people in Qana, Kafar Qasem, Sabra and Shatila camps is well known to everybody in the world. How could (they) advise peace coalitions and accuse others who have defended victims of extremism and aggression in the region?”

The recent remarks made by the Iranian leadership against Israel did not go down well with Tel Aviv and Ambassador Gilon said that the concerns regarding Iran and India’s interests because of the developing situation in Afghanistan were discussed during the visit of External Affairs Minister Dr S Jaishankar to Israel.

“In general, in foreign relations there are very few zero-sum games. In the end, there are compromises and each one has its own opinion and interest. I am very happy to say that Israel and India, during the visit of External Affairs Minister Jaishankar, were very close in the way they saw and interpreted what’s happening in the region. Of course, interests are very different in different countries. India has its interests, Israel has its interests. But we take into consideration the interests of each other because of the dear friendship between our countries,” he said.

Calling the Iranian regime “extreme” in its ideology and “dangerous”, Gilon said, “It has a very extreme ideology and regime and nuclear weapons are totally unacceptable. We will not let it happen. It is quite dangerous if you take the last statements of the Iranian leadership about the destruction of Israel or one bomb can wipe Israel off the map. It has caused a lot of unease.”

Without naming India, Iran advised her allies not to fall into the trap of Israel’s machinations.

“Certainly great civilizations with a great history of peace and coexistence are smarter than falling into the traps of such a selfish and blood- thirsty regime with huge records of human rights abuses, killings of children, and the childish remarks of its evil-minded zionist envoy,” said the Iranian statement.

Israel’s new envoy also spoke on cooperation in the counter-terrorism sector. When asked about India suffering from cross-border terrorism in Kashmir, Gilon said, “Terror is a terrible disease that the world is suffering from. Both our countries suffered heavily. Over the years, we have developed abilities and technologies. When it comes to fighting terrorism and eliminating terror, there is no limit to our readiness to cooperate.”

He added, “Terrorism has to disappear from this world. People have to speak and resolve disputes, not fight it through terrorism and killing civilians. We are open to cooperating with every country, especially India, who suffer from terrorism.”

With regards to the Supreme Court constituting an independent expert committee to look into the allegations of targeted surveillance of politicians, journalists, activists using the Pegasus spyware, the envoy said it was an “internal” matter of India. He clarified that under Israeli law, the software developed by NSO could be exported to any private company or individual. It can only be exported to a foreign government.

“Pegasus was developed by an Israeli company called NSO. NSO is a private company, yet under Israeli law, they need to get authorisation from the government for export. We strictly forbid them from exporting any element which is not a government element. They cannot export to private organisations and individuals,” he said.

The Supreme Court has formed an expert panel to probe the Pegasus snoopgate issue. The court on Wednesday said indiscriminate spying on individuals cannot be allowed. The expert committee will be headed by former Supreme Court judge Justice RV Raveendran. The Supreme Court also asked the committee to file a report within eight weeks.