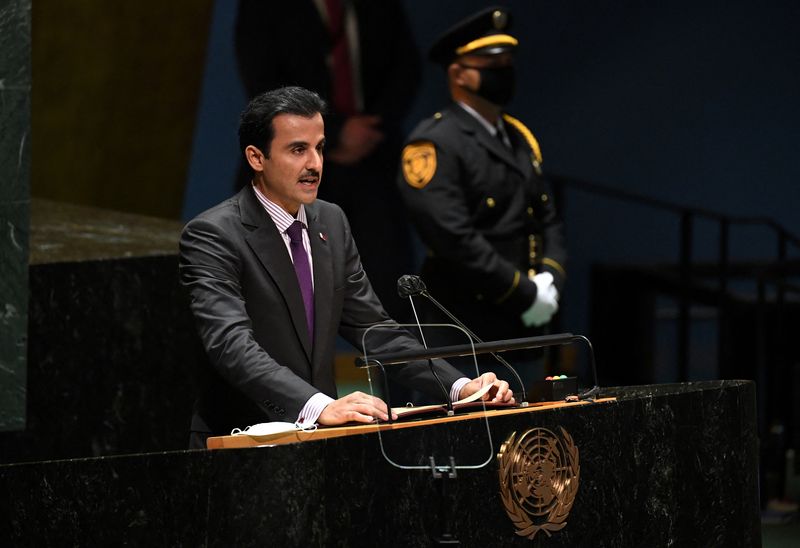 Qatar’s Emir Sheikh Tamim bin Hamad al-Thani speaks during the 76th Session of the General Assembly at UN Headquarters in New York on September 21, 2021. Timothy A. Clary/Pool via REUTERS

DOHA/WASHINGTON (Reuters) – Qatar’s ruling emir plans to visit Washington on Jan. 31, two sources familiar with the matter told Reuters, a trip likely to address Afghanistan, the security of gas supplies to Europe as well as Iran.

U.S. Secretary of State Antony Blinken discussed the matter with the foreign minister of Qatar, a top liquefied natural gas producer, in a phone call on Monday, one of the sources said.

Washington is concerned that a possible Russian military assault on Ukraine could trigger U.S. and European sanctions on Moscow, which would then halt the delivery of Russian gas to Europe. Russia denies it plans to attack Ukraine.

Sheikh Tamim’s visit aims to build on relations with ally Washington that have strengthened since Doha hosted talks that led to the 2020 deal for U.S. troops to pull out of Afghanistan, and played a pivotal role in evacuation efforts during the U.S. withdrawal. Qatar has also become the U.S. diplomatic representative in Afghanistan, now under Islamist Taliban rule.

Sheikh Tamim and Biden are also expected to discuss efforts by global powers to salvage a 2015 nuclear pact with Iran, with which Doha has ties, as well as efforts to end the Yemen war, the sources said.

The emir’s visit also comes amid a spiraling row between Qatar Airways and Europe’s Airbus, a rival of U.S. planemaker Boeing.

Airbus revoked a Qatar Airways order for jetliners after the Qatari airline sued the planemaker for more than $600 million over paint and surface flaws the airline says forced it to ground 21 A350 jets.