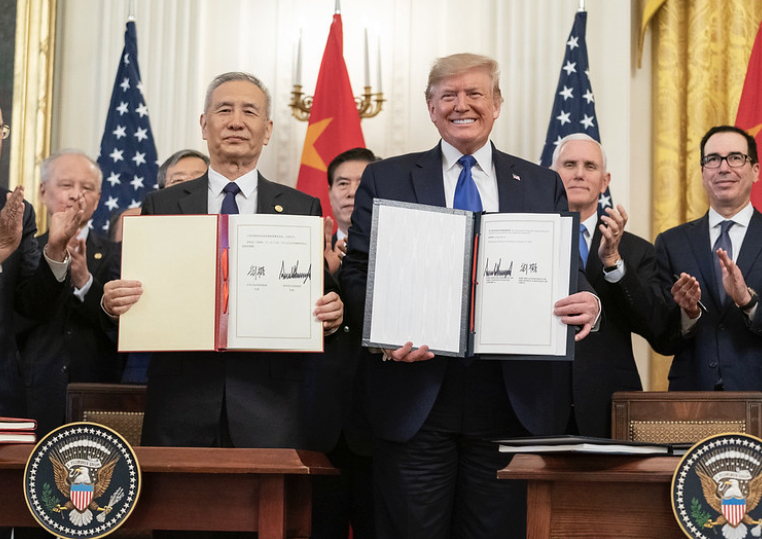 In a historic moment, President Donald J. Trump was joined today by the Vice Premier of China in the East Room of the White House. Together, they signed a new, fully enforceable trade agreement that rebalances this vital trade partnership while boosting American businesses, farmers, manufacturers, and innovators.

“From day one, my Administration has fought tirelessly to achieve a level playing field for the American worker,” President Trump said. Before he took office, Washington had long tolerated unfair trade practices that buoyed special interests while hurting U.S. working- and middle-class families.

“For years, politicians ran for office promising action to remedy these practices, only to do nothing but allow them to continue,” the President said this morning. “Unlike those who came before me, I kept my promise . . . Now, our efforts have yielded a transformative deal that will bring tremendous benefits to both countries.”

The new agreement makes good on a number of key promises to fix trade with China:

And that’s just phase one. The work on a phase-two deal is already underway.

“With this signing, we mark more than just an agreement. We mark a sea change in international trade. At long last, Americans have a government that puts them first at the negotiating table,” President Trump said.

A stronger America, of course, doesn’t come at the rest of the globe’s expense. On the contrary, when the United States is thriving, it makes the world a safer, more stable place. A better and fairer trade partnership with China will do much of the same.