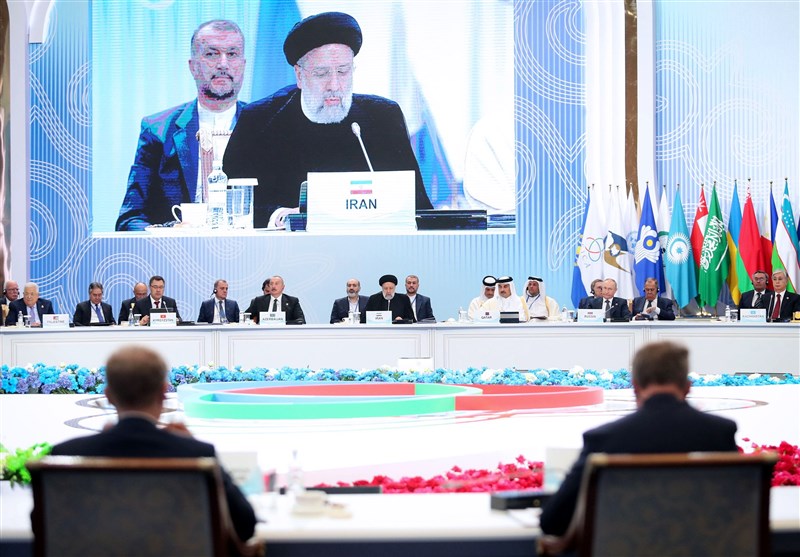 TEHRAN (Tasnim) – As the US’ policy of sanctions and maximum pressures on Iran has ended in dismal failure and its military strategies have proved futile as well, Washington and its allies have resorted to the failed policy of destabilization in Iran, Iranian President Ebrahim Raisi said.

The Iranian president delivered a speech to the 6th summit of the Conference on Interaction and Confidence Building Measures in Asia (CICA) in Kazakhstan’s Astana on Thursday.

Here is the full text of the presidential speech, released by his official website:

In the name of Allah, the Most Beneficent, the Most Merciful

Praise is due to Allah, the Lord of the Worlds, and His Peace and Blessings be upon Muhammad and His Pure Household and His Select Companions

First of all, I would like to express my gratitude to Mr. Tokayev, the honorable president of Kazakhstan, for his hospitality and also for the very good planning for holding this important meeting.

Congratulations on the 30th anniversary of the establishment of the Conference on Interaction and Confidence-Building Measures in Asia (CICA). I hope that by turning CICA into a regional organization, the growth process of this valuable cooperation structure will continue to gain an effective position at the regional and international level.

The process of transformation and transition in the international system has reached a certain stage. In the new redistribution of power, hegemonic approaches are rejected and the voice and role of independent countries are heard and observed more. This transformation and transition needs guidance and direction so as not to be trapped by the consequences of the former international systems. The cultural and spiritual capital that forms the common values ​​of the ancient continent of Asia guarantees order and a world that rejects oppression, injustice and unilateralism and deals with it. The key element in ensuring the success of this process is the cooperation and coordination of independent countries.

Having a civilizational history and cultural richness, the Islamic Republic of Iran has built its foreign policy on the basis of divine-human transcendental concepts of justice, spirituality, rationality, morality, freedom and independence, which as a whole guarantee the welfare and dignity of nations, and its manifestations can be seen in successful fight against terrorism, extremism, continuous assistance to Afghan refugees and immigrants, defense of oppressed nations from Palestine to Yemen, support of national sovereignty and territorial integrity of countries, including in Iraq and Syria, confrontation with unilateralism and domination in all its forms, and assistance to neighbors in difficult days; This path of authority has always been going along with the main way, which is the all-round progress of Iran.

The Islamic Republic of Iran considers itself committed to this path, and in order to realize a just order based on cooperation and mutual respect, it emphasizes the policy of neighborhood, multilateralism and sustainable convergence, and in this regard, especially considering its capacities in terms of geopolitics, energy, transportation and talented human resources are ready to play an active and constructive role in shaping and strengthening regional organizations as well as opposing the policies of power monopoly and unilateralism.

Security and cooperation are intertwined, which mutually bring national prosperity and regional development. The Islamic Republic of Iran believes in securing the common interests of independent countries through cooperation and will continue this strategy regardless of international developments. This approach will increase the cooperation of governments, the welfare of nations and regional trust-building. On the other hand, unilateralism, by trying to destabilize countries, seeks to hinder their progress and frustrate the convergence processes of independent nations. This important matter shows that convergence and security in Asia are not compatible with the interests of hegemonic countries, and any attempt to destabilize independent nations has goals and consequences beyond national geography, and in fact, it targets the stability and prosperity of the countries in the region.

The historical experience of the Iranian nation, especially in the last four decades, has provided us with a valuable understanding of the requirements of achieving security and progress at the same time, which I am sharing with you now. The nation of Iran, which has chosen the path of independence and progress, has faced the opposition of the powerful, a clear example of which was the coup and embargo even in the era before the Islamic revolution. With the victory of the Islamic Revolution, the will of the international bullies led by America is to stand against the will of the Iranian nation and challenge its rights and interests. Throughout this period, the Iranian nation has always faced various threats such as war, sanctions, assassinations, attempted coups, arming Saddam with chemical weapons by Europe and America to massacre his compatriots, and finally breaking the pact and breaking the covenant. We have come to believe that the path to independence and prosperity of the Iranian nation is possible through “all-round power” and this is only possible by relying on God, relying on the people, and cooperating with friends. The Iranian nation has invalidated the American military option and, as they themselves have admitted, brought the policy of sanctions and maximum pressure a humiliating failure. Now, following America’s failure in militarization and sanctions, Washington and its allies have resorted to the failed policy of destabilization. What has caused the success of the Iranian nation and terrified the dominators is the Iranian nation’s attention to progress based on its “inner strength”. Therefore, in the process of simultaneously providing security and progress, priority should be given to “endogenous power” and its strengthening mechanisms.

Considering that Asia is at the heart of emerging global changes, maintaining and strengthening peace in this vast area is not a choice but a necessity. CICA and its governing spirit, i.e. mutual trust, common interests, equality, joint consultation, respect for cultural diversity, emphasis on the necessity of realizing security and common development for all, is an effective mechanism that has an irreplaceable role for achieving and strengthening peace and security and promoting sustainable development for Asian nations, and it will be a valuable asset for future generations.

In the meantime, it should be noted that naturally, countries that breed terrorism themselves should not define the rules and regulations of fighting terrorism. The bullies who have taken the world financial system hostage and are engaged in looting the wealth of nations cannot be a reliable partner in shaping the emerging order.

The new Asia in the emerging world needs cooperation to design an endogenous model for independent countries to deal with security, economic, media and cyber challenges. This issue is especially important in creating a common financial system and using regional currencies, designing norms and rules for fighting terrorism, and also strengthening media cooperation.

The United States and the Zionist Regime have caused insecurity, violence, terrorism, war and anxiety in the region through aggression, occupation, apartheid, oppression and killing of children and civilians in Palestine, Syria, Iraq, Yemen and Afghanistan. Now, there is no other way than the end of the occupation and surrendering to the vote and the right of nations to determine their own destiny.

In Afghanistan, overcoming the vicious cycle of insecurity and instability requires serious determination and taking practical steps through political dialogues, the goal of which is to form an inclusive government with the participation of all ethnic and religious groups in the country and to implement international commitments, especially bilateral commitments with neighbors.

The Islamic Republic of Iran condemns and confronts terrorism in any form, including economic terrorism that seeks to stop the economic growth and development of independent countries. Economic terrorism is a universal threat that requires continuous cooperation and collective response.

Today, more than ever, the world needs a more effective role of regional mechanisms to create more opportunities for the objective interaction of international actors and the peaceful resolution of regional and global issues.

We believe that the member states of CICA, relying on their deep-rooted civilizational background, can base the existing methods for the expansion of peace and security on the basis of diplomacy and all-round interaction based on justice and spirituality. Certainly, the Islamic Republic of Iran will always be a steady partner in the continuous pursuit and strengthening of multilateralism based on justice.

I would like to once again thank the honorable president of Kazakhstan for his good and worthy hosting and I wish happiness and well-being for the government and people of this country.

Thank you for your attention