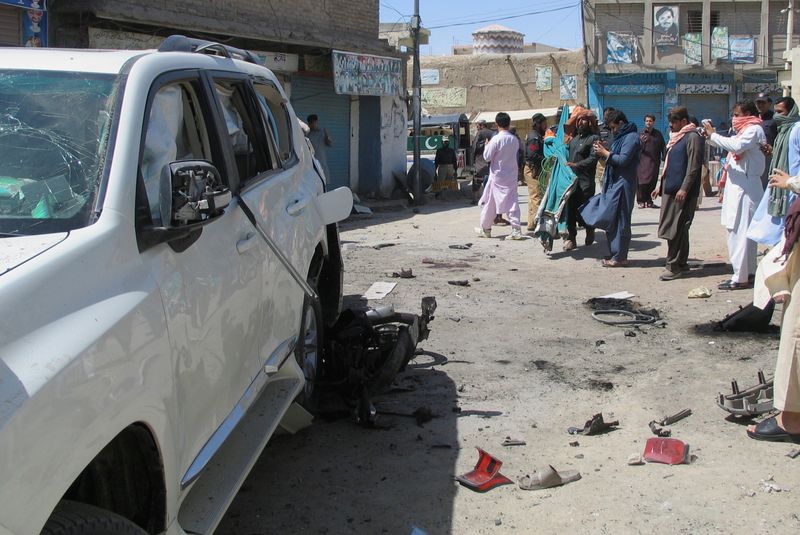 Police and residents gather at the site after a bomb blast in the Pakistan-Afghanistan border town of Chaman, Pakistan, May 21, 2021. REUTERS/Saeed Ali Achakzai

QUETTA, Pakistan (Reuters) – A bomb blast killed six people on Friday at a pro-Palestinian rally in southwest Pakistan and wounded 13, including the leader of a hardline religious party that organised the event, police said, but there was no immediate claim of responsibility.

The motorcycle bomb exploded as people dispersed at the end of the rally held in the city of Chaman near the Afghan border in the province of Balochistan, the region’s police chief, Jafar Khan, told Reuters by telephone.

He added that the bombing also wounded Maulana Abdul Qadir Luni, a cleric and leader of the religious party, which has a history of supporting Afghan Taliban militants.

The mineral-rich province bordering Iran and Afghanistan has long been convulsed by a nationalists’ insurgency seeking a greater share in the profits from exploitation of regional resources.

Other operators included Islamist militants linked to the Afghan and local Taliban as well as the Islamic State group.

The province is home to the newly expanded Gwadar deepwater

port, the centrepiece of a planned $65-billion investment in China’s Belt and Road Initiative economic corridor.

In April, a car bomb exploded in the parking area of a luxury hotel in the provincial headquarters of Quetta, killing four and wounding 11.

China’s envoy to Pakistan, who had been staying at the hotel, was away at the time, however.