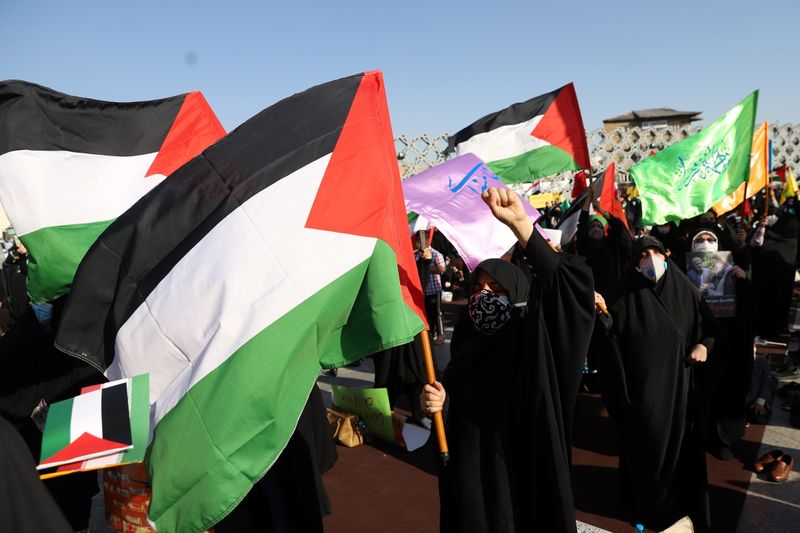 People gather during a demonstration to express solidarity with Palestinian people amid a flare-up of Israeli-Palestinian violence, in Tehran, Iran May 19, 2021. Majid Asgaripour/WANA (West Asia News Agency) via REUTERS

DUBAI (Reuters) – Iran said on Friday that Palestinians had won a “historic victory” over Israel, which the Revolutionary Guards warned to expect “deadly blows” after the 11-day Gaza conflict showed the power of the Palestinian arsenal.

Iran, which does not recognise Israel, supports and arms the Islamist militants of Hamas, who rule the Gaza Strip while President Mahmoud Abbas’s Palestinian Authority controls Palestinian-populated areas of the occupied West Bank.

Hamas and the Islamic Jihad group fired hundreds of rockets into Israel before Friday’s truce, killing a dozen civilians, although Israel said its “Iron Dome” defence system had shot the majority of them down.

The Iranian Revolutionary Guards said in a statement: “The intifada (Palestinian uprising) has gone from using stones to powerful, precise missiles … and in the future the Zionists (Israel) can expect to endure deadly blows from within the occupied territories.”

Supreme Leader Ayatollah Ali Khamenei said a year ago that Tehran had transformed the military balance of power between Israel and the Palestinians.

Iran on Friday displayed an Iranian-made combat drone that it said had a range of 2,000 km (1,250 miles), naming it “Gaza” in honour of the Palestinians’ struggle against Israel, state media reported.