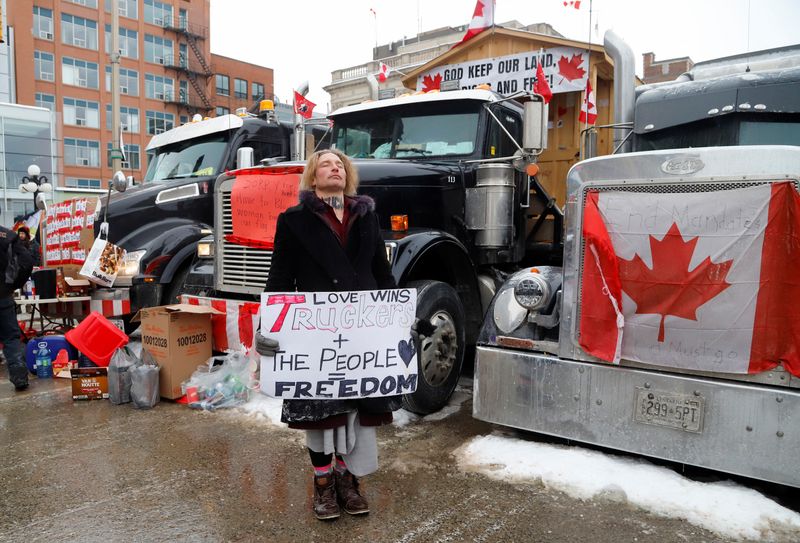 OTTAWA (Reuters) -Ottawa police vowed on Friday to crack down on an “increasingly dangerous” protest by hundreds of truckers who have shut down the center of the Canadian capital for eight days to demand an end to COVID-19 vaccine mandates.

The well-organized blockade, which police say has relied partly on funding from sympathizers in the United States, is unprecedented by Canadian standards. Ottawa police chief Peter Sloly said hundreds more truckers planned to enter the city this weekend.

Protesters in the downtown core “remain highly organized, well-funded, extremely committed to resisting all attempts to end the demonstration safely,” he added.

Some want an end to a federal COVID-19 vaccine mandate for cross-border truckers while others insist Liberal Prime Minister Justin Trudeau be deposed on the grounds he exceeded his authority by imposing restrictions to tackle the pandemic.

Sloly, who said he and other top officials had received death threats, likened the protest to the Jan. 6, 2021, riot in Washington when thousands of supporters of former president Donald Trump stormed the U.S. Capitol in a bid to overturn Joe Biden’s election victory.

Trump said in a statement that the truckers were “peacefully protesting the harsh policies of far left lunatic Justin Trudeau who has destroyed Canada with insane Covid mandates”.

To the increasing fury of residents https://www.reuters.com/world/americas/ottawans-fed-up-with-trucker-blockade-blame-police-inaction-2022-02-03, Ottawa police have so far largely stood by and watched as some protesters smashed windows, threatened reporters and health care workers and abused racial minorities.

Sloly said police would put in place a “surge and contain” strategy, including reinforcements of 150 officers deployed downtown, to restore order.

“The hatred, the violence, the illegal acts that Ottawa residences and businesses have endured over the last week are unacceptable,” he said.

Law and order is primarily a municipal and provincial responsibility and the federal government has limited room to act. Liberal Public Safety Minister Marco Mendicino said the prospects for confrontation remained high.

Blockades are also planned in Toronto and Quebec City. Francois Legault, premier of Quebec, said police would not allow truckers to block traffic.

The protest is dividing the official opposition Conservative Party, which this week ousted its leader https://www.reuters.com/world/americas/main-rival-canadas-trudeau-ousted-after-losing-party-confidence-vote-2022-02-02 amid complaints he had not sufficiently backed the truckers.

Interim Conservative chief Candice Bergen, in an email leaked to the Globe and Mail, said on Monday “we need to turn this into the PM’s problem”.

The party’s public safety spokesman, Pierre Paul-Hus, tweeted on Friday that the blockade needed to end. Fellow legislator Dean Allison then tweeted that Paul-Hus was wrong.

Police have uncovered at least two operations centers in Ottawa, with more across the country, and say demonstrators are receiving professional legal advice.

Sloly said police would order some truckers to move and if they refuse, their vehicles will be towed.