The latest offering by the Trump political operation is a plastic wallet card that can be purchased by his ardent supporters. These “Official Trump Cards” can be used to … well … show you possess one. Possession means you are a super fan, symbolically bonded to the cause of Trump. And as marketers and cult leaders the world over have shown, symbols are truly powerful.
Understanding the signal the former President is sending with his Trump Card requires recognizing Trump’s marketing genius. He is not a regular politician who labors over policy concerns or builds coalitions with peers he can respect — he is a less-than-scrupulous salesman who has spent decades selling himself first, and his products second. In fact, Trump’s marketing strategy has always been about promising buyers they’ll become a bit like him when they plunk down their money.
The marketing mindset allows Trump to see the magic in a worthless piece of plastic as reinforcing his bond with loyalists who, with every dollar and moment invested in their man, become more likely to stand by him for a 2024 run. Like a brand burned into the hide of a steer, the cards mark them as Trump’s political property. As the herd grows, his run for the White House becomes more certain.
These cards are reminiscent of party membership cards that were used by political movements in totalitarian states. The potential for abuse that comes with these sorts of documents — “Show us your papers!” — explains why the United States has never required people carry printed proof of their national identity. However, ID cards do appeal to those who yearn for connection with like-minded souls. Whether it’s the Mickey Mouse Club or the National Rifle Association, a membership card can create a sense of belonging in a world where it’s easy to feel disconnected and lonely.
Moreover, I’m not sure there’s anything that confers a sense of belonging more than a flag, which may explain the variety of banners waved by his supporters as they attacked the US Capitol on January 6. On that day, the Trump 2020 flags were accompanied by Confederate battle flags, “Don’t Tread on me” Gadsden flags, and, ironically, pro-police Thin Blue Line flags. If you pause for a moment and visualize these pennants you will likely feel some kind of emotion. If you love the former President, the Confederacy, and police you might feel warm and fuzzy. If you don’t, then you may feel anything from ambivalence to fear.
The power of symbols like flags and yes, membership cards, is connected to the fact that they represent something more than belonging. They identify insiders and outsiders — us and them. Humans most likely began using flags to rally warriors. Hence flag expert Whitney Smith’s illustration of a flag as a “primordial rag dipped in the blood of a conquered enemy and lifted high on a stick.” Over millennia, the visceral impact of flags was reinforced. For countries at war, the sight of a flag that rallies one side strikes fear in the other. 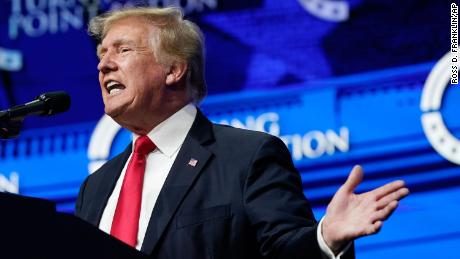 Among all of today’s political leaders, and arguably among all of them going back to the Civil War, none have equaled Trump when it comes to understanding the power of symbols and demonstrating a willingness to use them. With his famous Make American Great Again caps, his easily identified blue flags, and now his membership cards, Trump has equipped his supporters in a way never seen before. Others may have made campaign banners or pins available, but they came down after Election Day. Trump flags flew throughout his term in office and can be seen still today across the country (search for “Trump flag on pick-up truck” and you’ll see what I mean).
For former presidents, the retreat from symbols is quite pronounced. I can’t locate evidence of a Carter Card sold by the one-term President who left office in 1980, and if George H.W. Bush offered ID cards to the millions who voted for him in 1992, I can’t find one online.
Bush the First, Carter, and Trump: which of these one-term presidents is not like the other? For so many reasons, including his impeachment trials, divisive form of politics, and now his post-White House conduct, Trump is the odd man out. He is exceptional for many reasons, but I would say the main one is the pressure building around the notion that he will try to reclaim the office he lost.
No one has contributed more energy to the Trump in ’24 idea than the man himself. His repeated claim, against all evidence, that the election was stolen from him, has reverberated across his base of support. This, in turn, energized fundraising efforts that have allowed his organizations to fill a war chest with more than $100 million. In the meantime, various Trump entities and allies face trouble in courtrooms, and Congress is investigating both the January 6 attack and the former President’s taxes.
Although someone else would note all the trouble listed above and consider a presidential campaign a nonstarter, Trump may believe it’s a necessity. If he declares he’s a candidate, Trump would instantly add power to any claim he might make about how an unfair Congress and politically-minded prosecutors are out to get him. Add the special protections he would earn should he regain the presidency, and you can see why a campaign would make sense to him. Then add his ego, bruised as it may be from losing to Joe Biden, and running in 2024 seems compulsory.
Like the purchase of a flag, the act of buying a membership card represents a commitment, not to an organization or an ideal, but to a man. The plethora of loyalty and membership programs offered by corporations attest to their belief in the power of joining. Trump, having collected payment and sent back pennies worth of plastic emblazoned with his name, takes the upper hand because buyers become susceptible to what economists call the “sunk cost fallacy.” This theory explains why people who invest money in a product or candidate, are less likely to change direction.
With his genius for marketing and rallying supporters, Trump knows what he is doing as he offers them ways to identify with him. It doesn’t matter that the Trump card promises no value or benefit beyond affiliation. In fact, it’s probably better that it doesn’t, because it could keep purchasers bonded to him all the way to 2024 when the payoff would come in the next election.