That is how Tucker Carlson opens his new special “Patriot Purge,” which premiered this week as a three-part series on Fox Nation, Fox News’s online streaming platform. The story it tells is one of righteous patriots, drawn to the nation’s capital by a mix of concern about the validity of the election results and FBI entrapment.
There is plenty to criticize about “Patriot Purge,” which manages to stuff a remarkable amount of conspiracy and propaganda into its 70-minute airtime. In this narrative, insurrectionists become protagonists — peaceful protesters unfairly targeted as domestic terrorists. Among these are Darren Beattie, who was fired from the Trump administration for his ties to White nationalists, and far-right conspiracy theorist Ali Alexander, who helped organize the Jan. 6 rally.
Carlson’s aim with this false narrative is to forge a brand of populist conservatism with former President Donald Trump at its head, built for and around aggrieved, besieged “legacy Americans” — Carlson’s nativist term for White people whose families have lived in the United States for generations. Carlson’s politics are a lot like Trump’s — he has served as one of the leading voices of Trumpism for the past five years — but “Patriot Purge” shows how the movement continues to evolve as the US moves further in time away from the Trump administration.
“Patriot Purge” is politically, historically and logically confused, but its point isn’t to make sense, or to stand up to critical scrutiny. The point is to convince watchers that the insurrectionists are victims and government is the enemy.
The primary argument here is that the insurrection was an ordinary protest, and that any violence on January 6 was instigated not by Trump supporters but by “agents provocateur.” At various times in the series, the insurrection is called a “honeypot,” a “false flag” and “a set-up,” pretext for the political persecution of Trump supporters. Carlson lays out the argument that FBI agents and informants, whom he claims are also responsible for the kidnapping plot against Michigan Governor Gretchen Whitmer, were the ones who ginned up violence on January 6.
In an interview, Elijah Schaffer, a reporter for the right-wing site The Blaze, makes the more convoluted argument that sympathetic coverage of the George Floyd protests was not just a sign of liberal bias, but a deliberate effort to goad conservatives into believing that they could engage in violent protests without legal consequences. (It’s a messy argument, because it contradicts the claim that Trump supporters were nonviolent protests, but the series takes a throw-it-all-at-the-wall-and-see-what-sticks approach to its claims.)
Take a step back from the individual arguments, and what you’re left with is an overarching fantasy about the insurrection that goes like this: It was not an insurrection. To the extent there was violence, it was stirred up by members of the government and left-wing agitators. All of it was orchestrated so that the full force of federal law enforcement could be unleashed against Trump supporters, marking them as enemies of the state.
Most of the insurrectionists who have been charged are still awaiting their court dates. But the series lands as two other trials with political implications are underway: a civil trial in Virginia involving the white-power activists responsible for the violence in Charlottesville in 2017, and a criminal trial in Wisconsin for Kyle Rittenhouse, an armed then-17-year-old vigilante who traveled to Kenosha during protests there, killing two protesters and injuring a third. (His lawyers argue the killings were in self-defense.)
These trials fit into the larger story Carlson is telling. The mendacious “very fine people” narrative around Charlottesville has become an important narrative on the right. In truth, the planned rally was preceded by an act of political intimidation and violence, as attendees lit torches and marched onto the grounds of the University of Virginia, assaulting anti-racist protestors. And the rally the next day was headlined by open white-power advocates, some with a history of political violence. Choosing to join with such people was no ordinary political act. Yet for many on the right it remains an article of faith that ordinary conservatives — “very fine people” — were there with the racists in Charlottesville. 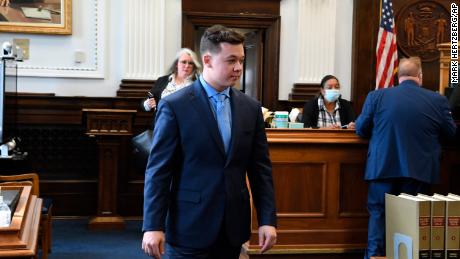 Rittenhouse, too, has become part of the far-right’s pattern of turning violent activists into persecuted heroes. Right-wing activists raised millions for his defense, and “Rittenhouse did nothing wrong” became a rallying cry on t-shirts and social media. A similar sanctification occurred with Ashli Babbitt, a participant in the insurrection who was shot and killed by law enforcement during the invasion of the Capitol. Babbitt, who was shot by a Capitol Police officer after breaking through a line of officers guarding the Speaker’s Lobby, has become a martyr for many on the right, with Donald Trump himself recording a video honoring her as “a truly incredible person.” “Patriot Purge” also explicitly defends Babbitt, while gratuitously showing her death again and again.
It’s crucial to understand just how wildly Carlson’s vision deviates from traditional conservative talking points. “Patriot Purge” starts from the notion that every aspect of the war on terror was bad. “You thought the first war on terror was dysfunctional, unjust, counterproductive?” Schaffer asks in the opening minutes of the first episode. “Wait until you get the War on Terror 2.0.” But until quite recently, few conservatives would have agreed with his rhetorical question.
Trump may have run for office arguing that the Bush administration had lied the US into war in Iraq and stayed too long in Afghanistan. But rarely have conservatives criticized the other features of the war on terror: the no-fly list, indefinite detention, surveillance of Muslim communities. Not only were conservatives in power at the start of the war on terror, but to the extent they have criticized it, they have primarily argued it did not go far enough.
Carlson, though, marries a Trumpian distrust of the “deep state” with the war on terror, landing on an argument the left has also been making for two decades about the national security state. But in a convoluted twist, he then uses that purported reasoning to rewrite the history of insurrection.
“Patriot Purge,” when viewed through the lens of the toxic legacies still unfolding in courtrooms in Charlottesville and Kenosha County, ultimately shows that whatever direction Trumpism goes next, it will still have at its heart violent conspiracies and a deep suspicion of democracy. There’s nothing truly conservative — or American — about any of it.