Share
Tweet
Share
Share
Email
Comments
The continuing effort to throw sand in the eyes of history — to gaslight the American people about what happened that day — is a thundering alarm about the future of America’s democracy. And it’s not just the distant future at stake. The next effort to overturn the will of the people — perhaps as soon as the 2024 presidential election — may just succeed.

The repeated lies about the 2020 presidential election and the January 6 events, combined with a persistent effort to rewrite election laws in Republican-controlled state legislatures, means that if a Trump-like campaign to steal the election is waged next time, it will have a much better chance of succeeding. The safeguards aimed at protecting the voters’ will are being deliberately dissolved by Republican officials.
The first step in protecting the country is learning from its mistakes. That’s why after the 9/11 terror attacks, Congress set up a bipartisan commission to get to the truth. The truth is required to build effective defenses.
This time, it’s been clear from the start that the truth is an obstacle to today’s Trump-dominated GOP.
Still, Democrats worked with Republicans to set up a fair, bipartisan January 6 commission. The agreement, initially reached last week, includes many elements McCarthy had demanded: an equal number of representatives from each party and a requirement that both sides approve all subpoenas.
But McCarthy likely never wanted a genuine investigation. His opposition will pressure other Republicans to vote against it. McCarthy is claiming that House Speaker Nancy Pelosi negotiated in bad faith, and he is insisting that the commission should also look into a series of other events, such as “political violence that has struck American cities,” referring to the Black Lives Matter-led protests that erupted last summer after the murder of George Floyd. 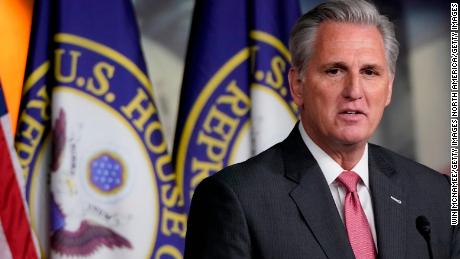 As Wyoming Rep. Liz Cheney — now expelled from the GOP leadership — suggested, a narrowly focused investigation “threatens [Republicans] ... who may have been playing a role they should not have been playing.”
McCarthy may worry about discussions of his expletive-filled phone call with then-President Donald Trump while the Capitol was under attack. While McCarthy was pleading with Trump to call off his supporters, the President flippantly replied, “I guess these people are more upset about the election than you are,” according to lawmakers who were briefed on the call afterward by the representative.
The evidence in a January 6 investigation could be damning for Republicans close to Trump, whose words sounded to many like incitement. From former Trump attorney Rudy Giuliani’s call for “trial by combat,” (totally innocent, Giuliani’s lawyer says) to the pro-Trump crowd during the rally just before the Capitol attack, to Alabama Rep. Mo Brooks’ roar to the same crowd — “Today is the day American patriots start taking down names and kicking ass”– and the thousands of thoroughly documented social media posts by members of Congress promoting the lie about a stolen election.
But many of today’s GOP leaders don’t want the country to learn from history. And, as philosophers and anyone endowed with common sense knows, if you don’t learn from history, you may repeat it, perhaps in a more disastrous version.
Democracy survived that day, but that may not happen the next time.
After an assault that derailed the certification of American voters’ choice of president, traumatized legislators dusted themselves off and did their job. Would they do that again?
Republicans who have stood up against Trump, in Washington, DC, and across the country, are getting pushed out, getting primaried or choosing not to run again.
There’s a very real chance that Democrats could lose their majority in the US House of Representatives and the US Senate in next year’s election. Would a majority Republican Congress, with the party likely having a higher concentration of Trumpists, defend an election result in which Democrats win? While it’s true that many Republicans, particularly in the Senate, tried to keep their heads down and not participate in the madness, those who have dared to speak out, like Utah Sen. Mitt Romney, have been criticized by Republicans.
The Republicans who tried to overturn the election results without a smidgen of evidence of fraud are losing their passion for democracy. Their creed now is “Whatever Trump Wants,” even though — and we can’t say this often enough — over four years, Trump led the party to lose the White House, the House and the Senate.
Even more disturbing is what’s happening at the state level.
Using false claims that there was election fraud in 2020, legislatures in 47 states are pushing for troubling changes in voting rules.
Georgia, whose newly enacted law received much attention, could serve as a model for others. Many noted mean-spirited parts of the law, like the one banning third-party groups from giving water to voters standing in line. But the more alarming parts of the law are the ones that empower the Republican-controlled legislature to remove individual counties’ election officials and give the Georgia General Assembly, now dominated by Republicans, much greater power over the State Election Board.
Georgia is a good example because, even though the election ran cleanly and smoothly, it was one of the states where there was a powerful effort to commit fraud — personally conducted by the former president of the United States. Who can forget Trump’s phone call to Secretary of State Brad Raffensperger, pressuring him to “find” enough votes to flip the result in his favor, a fact that Trump’s impeachment lawyers tried to twist at his Senate trial.
Raffensperger, a Republican, stood up to the then president. The new law curtails the role of the Secretary of State in elections, and already Georgia Republicans are punishing elected officials, who refused to commit fraud at Trump’s behest, by censoring and ostracizing them.
If the GOP was willing to help Trump in 2020, even after he all but advertised he would not accept the results if he lost, the party’s willingness to transgress in his name seems to have only grown since then.
Examining the past is not just an exercise for the benefit of history. It’s about discovering what went wrong in order to emerge stronger. It’s an effort to find weaknesses and vulnerabilities and then repair them. When a country has just lived through a coup attempt, it should urgently, honestly, examine what occurred.
The problem now is that the coup attempt, even though it failed, is not really over. Trump and many of his backers maliciously insist the election was stolen. If they have their way, the next coup attempt may not fail.