“I will be having a news conference on January 6th at Mar-a-Lago to discuss all of these points, and more,” said the former president in a statement so jammed with outlandish claims and trolling asides that it reads as if he dictated it in a single, excited breath.
Holding the press conference is an appalling choice that dishonors those who died from the hours-long battle between police and Trump loyalists who wanted to block Congress from certifying President Joe Biden’s election win. But Trump has two apparent goals: he wants to perpetuate false claims of election fraud and rewrite history with the lie that the attack was merely an “unarmed protest” in response to the “rigged election,” as his press release states. By making these false claims, he also wants to tighten his grip on the GOP by excoriating those who refuse to go along with his alternate version of reality.
On both counts, Trump’s stunt suggests a man operating not from a place of confidence and strength, but of anxiety and confusion. Anyone following the House select committee on January 6 would understand why. News from the committee indicates they are focused on Trump and his inner circle, with the possibility they could make criminal referrals to the Justice Department, sources told CNN. In the meantime, key figures like rally organizer Ali Alexander are cooperating with the committee.
It’s clear the former President wants to shore up his standing within the party — but taking in his efforts to stay relevant in the last year, it’s safe to say his power is limited. Sure, Trump has played an outsized role in shaping the GOP; his lies about election fraud have taken hold within the party, Republican-controlled states have passed a number of voter restriction laws and he’s ushered in an era of increasing extremism. But now that he no longer holds the highest office in the land, Trump himself is far from the kingmaker he wants to be. 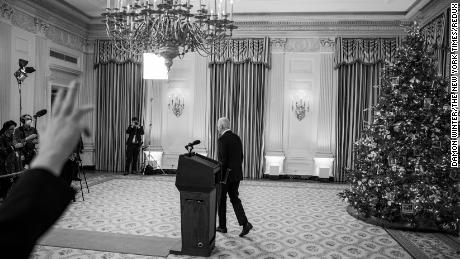 Looking back on the year, Trump’s attempts to wield his power over the GOP have been spotty. State-level attempts to overturn the 2020 election results have all failed, and when the former president pushed the governor of Texas to advance election audit legislation, it went nowhere. Meanwhile, his hand-picked candidate for the US Senate seat in Pennsylvania suspended his campaign amid allegations of domestic abuse. And in Alabama, his support for Senate candidate Mo Brooks appears to be having little effect (you may recall that Trump’s weakness showed in Alabama in 2017 when his picks for US Senate lost both in the primary and general election.)
Other Trump setbacks include the failure of his endorsed candidate in a special Congressional election in Texas. And those who are waging primary battles against incumbent Republicans who voted to impeach Trump after the January 6 insurrection are struggling with fundraising. In the most glaring example, January 6 committee member Rep. Liz Cheney of Wyoming — a Republican who may top the list of Trump’s enemies — has 10 times more campaign cash than her Trump-endorsed challenger, according to the most recent Federal Election Commission filings from October.
In Washington, DC, Senate Minority Leader Mitch McConnell, the most powerful Republican in office, seems to be distancing himself from Trump. He recently expressed interest in the January 6 committee’s effort to “reveal all of the participants who were involved,” and added, “It was a horrendous event, and I think what they are seeking to find out is something the public needs to know.”
Trump and his TV allies have for months barraged McConnell with criticism. And despite the former president recently declaring McConnell “a disaster” who should be replaced, Republican senators seem to have no appetite for doing so, according to Politico.
To understand the state of Trumpism nearly one year after January 6, we can also look to his recent speaking events. Trump teamed up with former Fox News host Bill O’Reilly to launch a “History Tour,” but they failed to sell enough tickets to fill a few of the venues. In Dallas, some members of the audience booed Trump when he said he had received the Covid-19 booster shot. O’Reilly said he had reassured Trump about his position on vaccines earlier in the day.
Added together, the weak showing in political races, McConnell’s resilience, the relentless investigation by the January 6 committee and the shock of hearing boos in an arena that failed to sell out — it’s no wonder Trump is planning a press conference to mark the anniversary of the horrific attack on the US Capitol. He may be in balmy Palm Beach, Florida, where the sun shines on his Mar-A-Lago resort, but he’s in desperate need of the warmth brought by the media’s attention and the controversies he will inevitably stir.