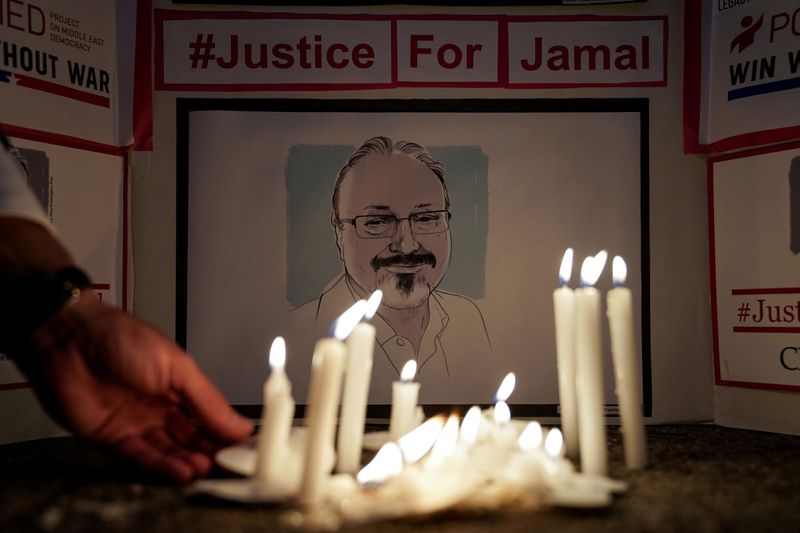 FILE PHOTO: The Committee to Protect Journalists and other press freedom activists hold a candlelight vigil in front of the Saudi Embassy to mark the anniversary of the killing of journalist Jamal Khashoggi at the kingdom’s consulate in Istanbul, Wednesday evening in Washington, U.S., October 2, 2019. REUTERS/Sarah Silbiger

By Alain Acco and Tassilo Hummel

PARIS (Reuters) – One of the suspected killers of Saudi journalist Jamal Khashoggi was arrested at Roissy airport near Paris on Tuesday as he was about to board a flight to Riyadh, a police source and a judicial source said.

Khashoggi, a critic of Prince Mohammed, was last seen entering the Saudi consulate in Istanbul on Oct. 2, 2018. Turkish officials believe his body was dismembered and removed. His remains have not been found.

Al-Otaibi, who is mentioned on a British UK sanction list as being involved in Khashoggi’s murder, was also on a French wanted list.

He was arrested on the basis of a warrant issued by Turkey in 2019, the police source told Reuters. French prosecutors will now begin proceedings for a potential extradition there.

“He was involved in the unlawful killing of Jamal Khashoggi in Istanbul on 2 October 2018, as part of the 15 man team sent to Turkey by Saudi authorities,” the report by Britain’s Office of Financial Sanctions Implementation said.

Al-Otaibi, born in 1988, “was involved in the concealment of evidence at the Saudi General Consul’s residence following the killing,” that report said.

A U.S. intelligence report released in March said Prince Mohammed had approved the operation to kill or capture Khashoggi. The Saudi government has denied any involvement by the crown prince and rejected the report’s findings.

France is one of Saudi Arabia’s main arms suppliers, but it has faced pressure to review its sales because of the Saudi-led coalition fighting the Iran-aligned Houthi rebels in Yemen, now one of the world’s worst humanitarian crises.

Macron last week rejected accusations that he was legitimising the crown prince, saying the region’s many crises could not be dealt with by ignoring Saudi Arabia.

The judicial source confirmed Al-Otaibi’s arrest on the basis of a Turkish arrest warrant. Authorities were in the process of verifying his identity and it was too soon to say if and when an extradition could take place, the source said.

It was unclear how or when Al-Otaibi arrived in France.

The French Interior Ministry and the Saudi embassy in Paris declined to comment. The Saudi government media office CIC did not immediately respond to a request for comment.

Al-Otaibi’s arrest was welcomed by Reporters Without Borders.

“Excellent news that the French police did not turn a blind eye to the presence on the national territory of Khaled Al-Otaibi,” the media watchdog’s head, Christophe Deloire, said. “Finally a protagonist who can speak.”