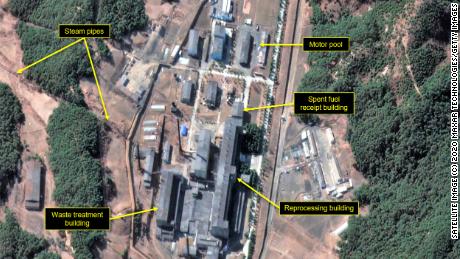 Share
Tweet
Share
Share
Email
Comments
The International Atomic Energy Agency said that clues, such as the discharge of cooling water, observed in early July indicated the plant is active. No such evidence had been observed since December 2018, the IAEA said.
The IAEA said the findings, published Friday in an annual report on Pyongyang’s nuclear program, were “deeply troubling” and “a cause for serious concern.”
“The continuation of the DPRK’s nuclear program is a clear violation of relevant UN Security Council resolutions and is deeply regrettable,” the report added, referring to North Korea by its official acronym, The Democratic People’s Republic of Korea (DPRK).
The IAEA said there also were signs of activity at the nearby radiochemical laboratory, from mid-February until early July. The power plant is used to make nuclear fuel, and the radiochemical laboratory is used to reprocess the fuel rods from the plant into plutonium that can, theoretically, be used in the manufacturing of nuclear weapons.
Both the plant and the lab are located in North Korea’s best-known nuclear complex, Yongbyon.
The IAEA and other independent analysts have previously reported on the observed activity at the radiochemical laboratory and believed it may have been part of a campaign to turn nuclear fuel into plutonium for nuclear weapons.
IAEA Director-General Rafael Grossi said in June that the duration of activity at the lab was consistent “with the time required for a reprocessing campaign.”