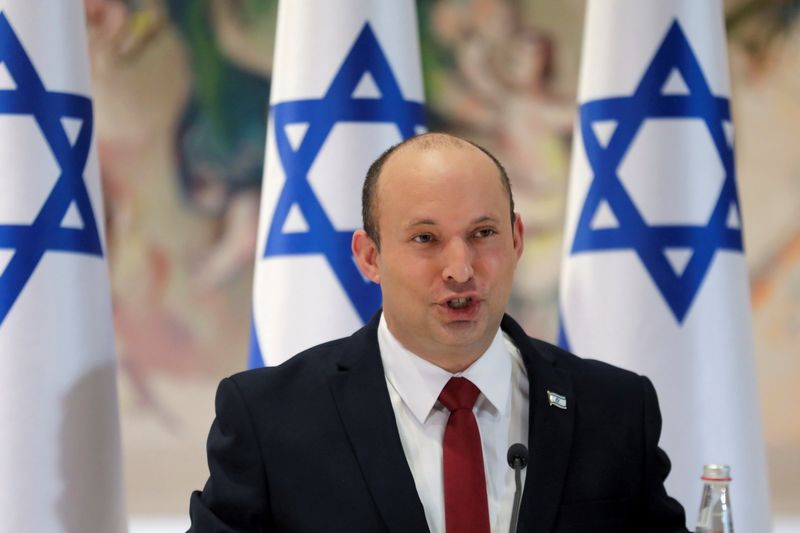 JERUSALEM (Reuters) – Israeli Prime Minister Naftali Bennett sought on Monday to play down any notion of a move towards renewed peace negotiations with the Palestinians after the highest-level Israeli-Palestinian meeting in years.

Hours after Defence Minister Benny Gantz and Palestinian President Mahmoud Abbas met, the main Israeli media outlets quoted “a source close to the prime minister” as saying: “There is no diplomatic process with the Palestinians, nor will there be one.”

The session, which was not announced in advance, covered only “routine issues”, according to the source. Hussein Al Sheikh, a member of Abbas’ Fatah Central Committee, said the talks included “all aspects” of Palestinian-Israeli relations.

Gantz, who heads a centrist party, and Abbas convened two days after Bennett, a far-right politician who opposes Palestinian statehood, met in Washington with U.S. President Joe Biden, who backs the idea.

A White House statement said Biden reiterated to Bennett his support for a two-state solution to the Israeli-Palestinian conflict and “underscored the importance of steps to improve the lives of Palestinians”.

Bennett did not mention Palestinians in public remarks at the White House that focused largely on arch-enemy Iran’s nuclear programme.

Gantz has called in the past for resumption of a peace process with the Palestinians, who aspire to a state of their own in the occupied West Bank and Gaza Strip, with East Jerusalem as its capital. Israel captured those territories in the 1967 Middle East war.

But any renewed movement on the issue could shake the foundations of Bennett’s government of left-wing, rightist, centrist and Arab parties that in June ended Benjamin Netanyahu’s 12-year run as prime minister.

In a sign of friction over Palestinian statehood from within the coalition, Mossi Raz, a legislator from the left-wing Meretz party, said dismissal of prospects for renewed peace talks by the Bennett source was “outrageous”.

“A peace process is an Israeli interest,” Raz wrote on Twitter.

A statement from Gantz’s office made no mention of peacemaking, saying only that he and Abbas discussed the security and economic situation in the West Bank and in the Gaza Strip, an enclave run by Abbas’s Hamas Islamist rivals.

The meeting in the West Bank city of Ramallah marked the first time Israeli and Palestinian talks at such a senior level have been confirmed since peace U.S.-brokered peace negotiations collapsed in 2014.

The source quoted by Israeli media said Bennett had given Gantz the go-ahead to see Abbas.