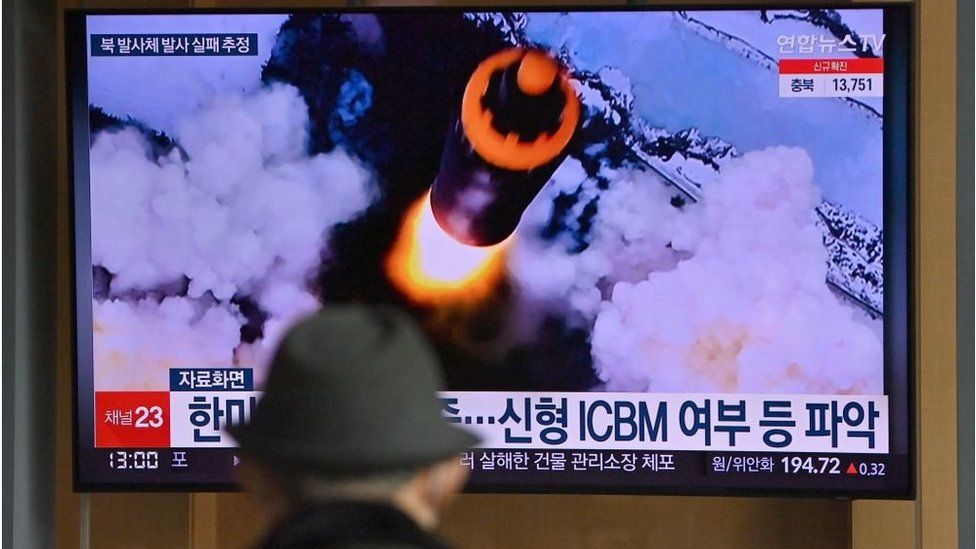 North Korea has tested a banned intercontinental ballistic missile (ICBM) for the first time since 2017, South Korea and Japan say.

Japanese officials estimated it flew 1,100 km (684 miles). It fell in Japanese waters after flying for more than an hour.

An ICBM can travel thousands of kilometres on a standard trajectory, and could theoretically reach the US.

North Korea has launched a flurry of missile tests in recent weeks.

The US and South Korea have said some of those tests, which Pyongyang claimed were satellite launches, were actually trials of parts of an ICBM system.

Thursday’s missile appeared to be newer and more powerful than the one North Korea fired five years ago, reaching an altitude of more than 6,000km, according to Japanese officials.

South Korea’s military responded with five missile tests of its own, from land, sea and air.

The United States and South Korea have warned in recent weeks that North Korea may be preparing to test-fire an ICBM at full range for the first time since 2017.

South Korean President Moon Jae-in condemned the latest missile launch, calling it a “breach of the suspension of intercontinental ballistic missile launches promised by Chairman Kim Jong-un to the international community”, adding it was also in violation of UN sanctions.

The Kim regime is determined not only to keep South Korea hostage to military threats that can evade Seoul’s missile defences and pre-emptive strike capabilities; it aims to expand its nuclear reach over the American homeland to deter Washington from coming to the defence of US allies.

North Korea is nowhere near initiating aggression on the scale of Russia’s invasion of Ukraine. But Pyongyang’s ambitions likewise exceed self-defence as it wants to overturn the post-war security order in Asia.

The effectiveness of existing sanctions is waning due to lax enforcement by some countries.

Given China and Russia’s lack of co-operation on the UN Security Council, the US and its allies will likely need to sanction more entities in those countries and elsewhere that are aiding North Korea’s weapons programmes.

The incoming Yoon administration in South Korea can be expected to increase defence exercises with the United States and security co-operation with Japan.

The UN prohibits North Korea from ballistic and nuclear weapons tests, and has imposed strict sanctions after previous tests.

In 2018 Kim Jong-un put in place a moratorium on long-range ballistic missile and nuclear tests, following talks with then US President Donald Trump.

But in 2020, Mr Kim announced he was no longer bound by this promise.

The Hwasong-14 demonstrated even greater potential, with a range of 8,000km.

Only the US, Russia and China have land-based missiles of this range.

Experts estimated that the 2017 missile could have travelled more than 13,000km if it had been fired on a standard trajectory, which meant it could reach any part of the continental United States.

The facility, located in the north-east of the country, had been blown up in 2018 after Mr Kim promised to halt all nuclear tests.