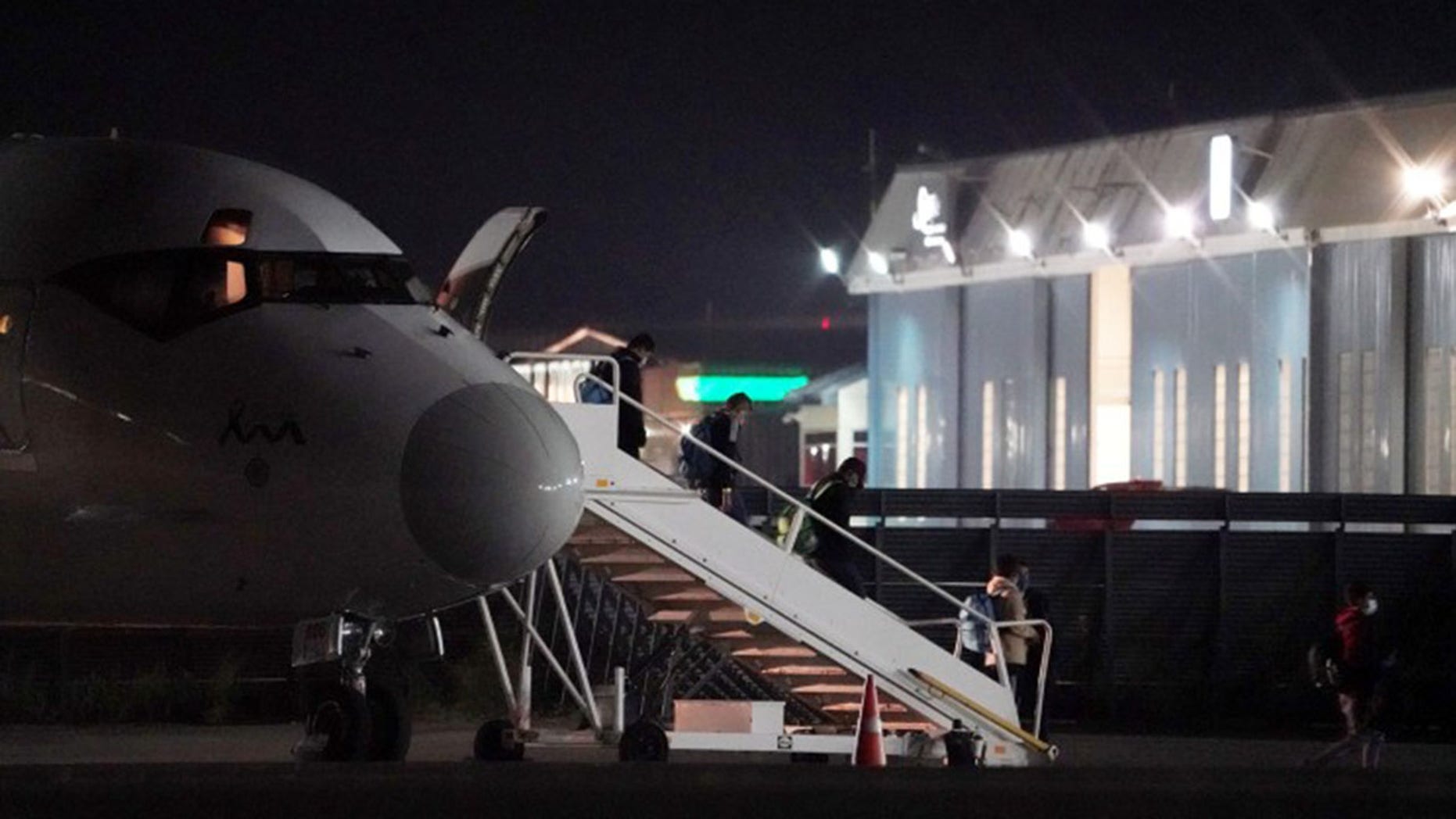 Planeloads of underage migrants are being flown secretly into suburban New York in an effort by President Biden’s administration to quietly resettle them across the region, The Post has learned.

The charter flights originate in Texas, where the ongoing border crisis has overwhelmed local immigration officials, and have been underway since at least August, according to sources familiar with the matter.

Last week, The Post saw two planes land at the Westchester County Airport, where most of the passengers who got off appeared to be children and teens, with a small portion appearing to be men in their 20s.

IMMIGRATION ACTIVISTS WALK OUT ON BIDEN ADMINISTRATION DURING MEETING IN PROTEST: ‘TURNING POINT’

Westchester County cops stood by as the passengers — whose flights arrived at 10:49 p.m. Wednesday and 9:52 p.m. Friday — got off and piled into buses.

Some of them were later seen meeting up with relatives or sponsors in New Jersey, or being dropped off at a residential facility on Long Island.

A Post analysis of online flight-tracking data suggests that around 2,000 migrants nabbed after sneaking into the US from Mexico have arrived at the airport outside White Plains on 21 flights since Aug. 8.

The clandestine nature of the operation raises questions about how the White House is dealing with a surge in unaccompanied minors.

The most recent figures from US Customs and Border Protection show that just during July and August,  37,805 unaccompanied minors were caught entering the US from Mexico — sometimes after being abandoned  by professional  smugglers known as “coyotes.”

Video shows some children dropped over the border wall or abandoned in remote areas.

A source familiar with the operation at the Westchester airport said the underage migrants typically arrive carrying backpacks and are bused to locations including The Bronx, Brooklyn, Queens, upstate Newburgh and Bridgeport and Danbury in Connecticut.

On Friday night, one bus left the Westchester airport and barreled down the Hutchinson River Parkway — which is off-limits to commercial vehicles — at speeds greater than 75 mph before crossing the Throgs Neck Bridge.

Around 12:30 a.m. Saturday, it stopped in Syosset, Long Island, at the campus of MercyFirst, a nonprofit sponsored by the Catholic Sisters of Mercy that provides housing and services for “children and adolescents who are the victims of societal problems,” according to its website.

FILE — In this Feb. 19, 2021 file photo a woman seeking asylum in the United States waits with others for news of policy changes, in Tijuana, Mexico. The Biden administration outlined a plan to reinstate a border policy that made asylum-seekers wait in Mexico for hearings in U.S. immigration court. Details were disclosed in a court filing after a federal judge in Texas ordered that the policy by resumed “in good faith,” having started under President Donald Trump and sending about 70,000 people back to Mexico until Biden abruptly ended because he felt it was inhumane. (AP Photo/Gregory Bull, File)

MercyFirst has a contract to supply the federal government with residential services for “immigrant youth,” according to the site.

Later Saturday, a similar scene began playing out in Jacksonville, Fla., where many of the flights from Texas have touched down before continuing on to Westchester — and where The Post saw a Boeing 737-700 land shortly after 10 p.m. at Jacksonville International Airport.

As local cops stood by, a group of between 10 and 15 people wearing matching white baseball caps and carrying duffel bags got off the plane and onto a charter bus near a dormant cargo terminal.

After a two-hour ride, the group arrived around 1 a.m. Sunday at the Twin Oaks Academy, a juvenile detention center in the Apalachicola National Forest near Tallahassee, where staffers were waiting to open a gate topped with barbed wire.

Republican Florida Gov. Ron DeSantis expressed outrage at The Post’s findings, with a spokeswoman saying: “If the Biden Administration is so confident that their open-border policy is good for our country, why the secrecy?”

“Why is the Biden Administration refusing to share even the most basic information about illegal alien resettlement in communities throughout our state and the entire country?” spokeswoman Christina Pushaw said.

“Washington DC sets immigration policies that do not affect them, and states — that lack information about migrant resettlement and do not have the authority to change federal immigration policy — are expected to bear the brunt of Biden’s reckless open-borders agenda.”

On Wednesday, The Post also saw two buses leave the Westchester airport carrying about 100 passengers who arrived on a McDonnell Douglas MD-83.

One bus stopped at the Thomas Edison Service Area off the New Jersey Turnpike in Woodbridge, where the migrants got off around 12:45 a.m. Thursday.

Over the next two hours, they were driven away in cars by people who met them there — without anyone appearing to have to show identification to the officials overseeing the operation.

A woman who lives near the airport told The Post on Monday that a flight arrived there “around 3 or 4” that morning “and it was shaking the house” and awakened her 8-month-old baby boy.

“I got used to the regular airport noise but these planes or jets sound different. Lower, more bass. And they’re coming in the middle of the night!”

The neighbor also said that she “can see the airport perfectly from my upstairs” and has noticed “a few buses that say ‘Out of Service’ hanging around” that aren’t the usual county buses or airport shuttles.

And she said the airport has lately been “much darker than usual” overnight.

“I liked the way it looked like a little city — blue and white lights,” she said.

“But since the middle of this summer, they are all off, except one or two of them on the top of the Flexjet hangar…I guess so you can’t see what’s going on.”

SEN. BLACKBURN TOURS BORDER, SAYS CRISIS ‘CANNOT CONTINUE’ AS SHE CALLS ON BIDEN TO STEP UP

Former Westchester County Executive Rob Astorino, a Republican candidate for governor, said he learned about the flights from citizens upset by violations of the voluntary curfew.

Astorino said that smaller planes apparently began arriving in April, when he said the flights weren’t “as frequent.”

When Astorino held an Aug. 16 news conference at the airport, he said, a flight arrived carrying passengers who got onto a bus that pulled up close to the airstairs and partially blocked the view of the people boarding it.

Astorino said he spotted at least 50 to 75 migrants, most of whom appeared to be men older than 20.

“No one has explained where they’re going and who they are,” he said.

“The Biden administration is systematically spreading the southern border crisis to communities all around the country, often shrouded in secrecy and under the cloak of darkness.”

Meanwhile, a spokeswoman for Democratic Westchester County Executive George Latimer tried to downplay the situation as “nothing new.”

“This is similar to when HHS, under the Trump administration, housed almost 1 thousand migrant children in Westchester- without the County’s prior knowledge or approval,” spokeswoman Catherine Cioffi said in a written statement.

“Then, as opposed to now, there was no outcry by anyone.”

The White House insisted Monday that the flights only carry children and teens, and the US Department of Health and Human Services said, “It is our legal responsibility to safely care for unaccompanied children until they can be swiftly unified with a parent or a vetted sponsor.”

“Our Office of Refugee Resettlement facilitates travel for the children in its custody to their family or sponsors across the country,” HHS spokesman Jorge Silva said.

“In recent weeks, unaccompanied children passed through the Westchester airport en route to their final destination to be unified with their parents or vetted sponsor.”