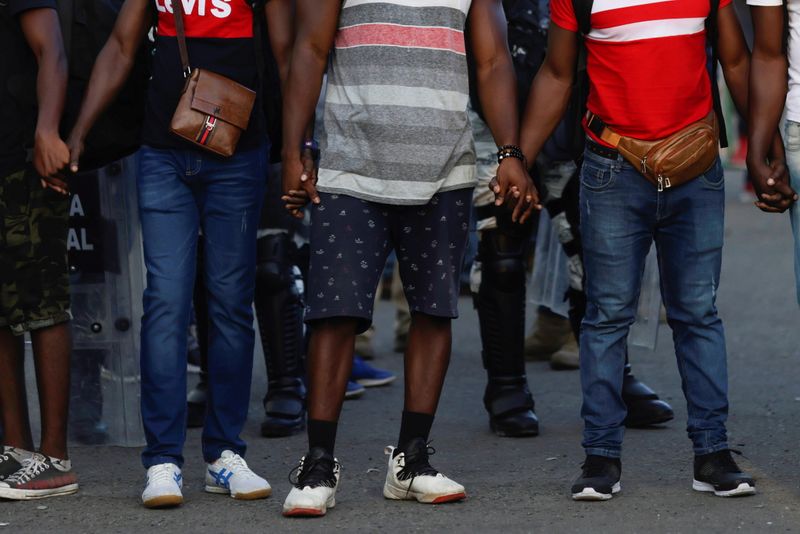 FILE PHOTO: Migrants hold hands to control other migrants who want to get on a bus, in Tapachula, Mexico December 6, 2021. REUTERS/Jose Luis Gonzalez

MEXICO CITY (Reuters) – Mexican officials have sped up the transfer of thousands of migrants from southern Mexico to other regions as northern border states prepare to receive asylum seekers sent back to Mexico from the United States.

Dozens of buses full of migrants, mostly from Central America as well as some from Cuba and Venezuela, have the city of Tapachula in Chiapas state in recent days to head to other states, a Reuters witness and an activist said on Monday.

Many of the migrants had waited months in Tapachula, near the Guatemala border, to try to regularize their migration status. Many have left violent and impoverished home countries hoping to eventually seek asylum in the United States.

U.S. President Joe Biden’s administration on Thursday said it would re-instate the Migrant Protection Protocols (MPP), a contentious Trump-era policy that requires asylum seekers to wait out their cases in Mexico, a decision that shelters along the northern border have said could overwhelm their capacity.

The first group of migrants under the revamped program are expected to be returned to Mexico this week.

In Tapachula, 45 buses took migrants out of the city on Saturday, said a government source who requested anonymity.

Migrant rights activist Luis Garcia Villagran said migration officers took 32 full buses of migrants out of the city on Sunday, and another 70 on Monday.

“They are trying to not saturate the northern border now that MPP is starting,” he said. “That’s why they are moving them more quickly, controlling where the migrants are going.”

Mexico’s national migration institute did not respond to a request for comment.

A Nicaraguan migrant who declined to be identified said he was relived to get on a bus to the city of San Miguel de Allende in the central state of Guanajuato.

“I was here for a few months but thank God we are going,” he said.

Large numbers of migrants, especially from Haiti, remained clustered in Tapachula waiting for buses, with some sleeping in a camp outside a stadium that migration officers have used as a processing center.