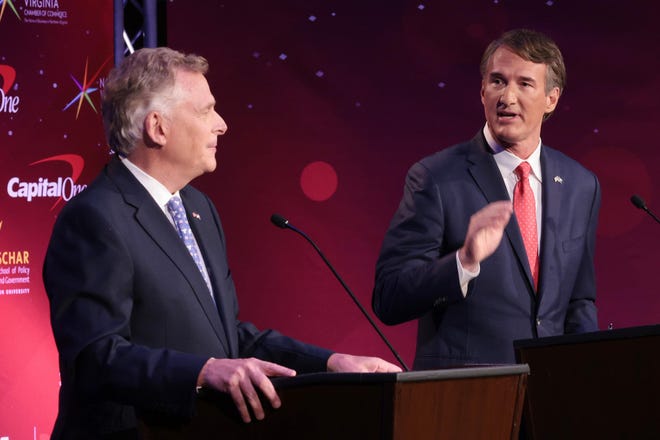 Virginia’s bellwether race for governor remains close in the final stretch of a campaign that is testing President Joe Biden’s sagging approval numbers going into the 2022 midterms.

Democrat Terry McAuliffe and Republican Glenn Youngkin are tied at roughly 45% each, according to a new USA TODAY/Suffolk University Poll released Tuesday. But roughly 5% of likely voters say they are still undecided a week before the Nov. 2 election.

David Paleologos, director of Suffolk University Political Research Center, said the race is simply a “dead heat,” and will boil down to which party can get out its voters.

“It’s down to turnout,” Paleologos said.

The race is much closer than Democrats had hoped after winning two straight governor’s races, including a 2013 victory by McAuliffe, and Biden carrying the state by 10 percentage points over Donald Trump last year.

Since then, however, Virginia voters appear to be souring on the president at the worst time for Democrats.

With Biden scheduled to headline a rally in Arlington on Tuesday, 41% approve of how the president is doing compared to 52% who express disapproval with his performance.

The president’s support has cascaded among Virginians since early in his administration, according to a series of polls from Morning Consult.

“There’s a long history of the Virginia governor’s race breaking against the White House party,” said Kyle Kondik, managing editor of the Crystal Ball, a political analysis newsletter at the University of Virginia.

“And I think as soon as Joe Biden started to slip and his approval rating turned net negative, I think that certainly contributed to this race getting closer.”

Kondik said the USA TODAY/Suffolk University Poll fits with other publicly shared surveys in recent weeks that show McAuliffe and Youngkin basically tied. He said the race always had the potential to be this competitive as long as the GOP didn’t nominate a “super Donald Trump candidate” too far to the political right.

“Youngkin is not a moderate, but I think that he is probably more acceptable to some Virginia voters than maybe Donald Trump was or maybe some other Republicans have been,” Kondik said.

Lisa Suhay, a 55-year-old children’s book author from Norfolk, Va., said there is palpable anxiety among left-leaning voters about the prospect of the GOP flipping The Old Dominion State.

“I’m wrecked as a Democrat,” she said. “I’m very worried because I think Youngkin will take our state in a direction that won’t be a healing direction.”

McAuliffe has been losing ground for weeks since earlier polls showed him up by as much as 9 percentage points.

During a private virtual call with supporters earlier this month, McAuliffe admitted Biden’s flailing numbers aren’t helping. He spoke of how “headwinds from Washington” were hurting his campaign.

“The president is unpopular today unfortunately here in Virginia, so we got to plow through,” McAuliffe said.

But Suhay said the former governor’s woes are related to a deflation among Democratic voters, who she said are exhausted with the past year of American politics.

“I don’t think it’s necessarily as much that Biden is a stinker now as it is that people have forgotten the previous comparison,” she said.

“Big chunks of the Democratic Party are not motivated, and I don’t think that Democrats in Virginia really understand the gravity of what will happen if Youngkin gets in.”

Among those surveyed, 40% said they voted for Trump in the 2020 presidential election compared to 47% who pulled the lever for Biden.

The USA TODAY/Suffolk University Poll, which has a 4.4% margin of error, shows a significant chunk of Virginia voters are overwhelmingly pessimistic about the country’s direction.

Approximately 66% said it is on the wrong track versus about 26% who say it is going in the right direction.

Democrat Mari Bonomi, 77, a retiree who lives in Kilmarnock, Va., said the direction of the country shouldn’t be laid totally at Biden’s feet with just nine months in office.

“He’s tried, but he hasn’t succeeded,” she said of the president.

Those same voters who were surveyed have a more optimistic view of their state compared to the rest of the country, however. The poll found 49.8% said Virginia is on the wrong track versus 43.6% who believe it is heading down the right path. But, almost two-thirds of voters said Virginia’s economy had either gotten worse or stayed the same over the past four years. Twenty-nine percent said the state economy had improved.

“There is no passion on the Democratic side in a lot of the state because for many of us, McAuliffe should have kept himself out of the race,” Bonomi said. “He’s already been governor. I’m really worried. I am really, really worried.”

The Youngkin campaign has been aggressive with attack ads that latch on to a movement led by conservative activists against certain curriculum in public schools.

During the second and final debate, when asked about who should be in charge of education policy and curriculum, McAuliffe said he wasn’t, “going to let parents come into schools and actually take books out and make their own decision.”

“I don’t think parents should be telling schools what they should teach,” he added.

That comment infuriated right-leaning parents, and Youngkin’s team quickly used it to slam McAuliffe as being out of touch with parents and their values.

Asked who should have more of an influence on a school’s curriculum, 49.8% sided with parents compared to 38.8% who said school boards, according to the poll.

McAuliffe has also called for creating COVID-19 vaccine and mask mandates in schools and businesses. Youngkin opposes those ideas, saying individuals should make their own decisions and that parents know what’s best for their children.

Barbara Osborne, 50, from South Riding, Va., a Republican voter and project manager for a defense contractor, said she supports Youngkin because “Virginia is moving too quickly to the left.”

She cited education policies like the teaching of critical race theory.

“My biggest reason for supporting Youngkin is education,” Osborne said.

Republican Mary Fischbach, 59, a retired teacher from Chesapeake, Va., said she likes Youngkin because “he’s going to stand up for parents’ rights in education.”

Sarah Longwell, a political strategist who has conducted focus group interviews of Virginia voters, said her sessions indicate that Republicans may be more motivated because of opposition to Biden. Democrats, she said, may be less enthusiastic about the race because of frustration with Biden.

“It’s about who is motivated and who is not,” said Longwell, a Trump critic who is executive director of an organization called the Republican Accountability Project.

What’s received little national attention has been the impact Libertarian Princess Blanding, who is the only other name on the Virginia gubernatorial ballot, could have on the race.

She’s raking in nearly 2% of the vote, according to the poll, which could be critical in such a tight contest where the two major party candidates are separated by about half a percentage point.

“The least known candidate of the three… now holds the key to the governor’s castle,” Paleologos said.

“At this point her 2% is larger than the margin between McAuliffe and Youngkin, and when it comes to young voters and independents, Blanding matters more.”

Blanding, an activist and educator, does best among independents where she carries about 6% of the vote. She also holds 5% among voters age 18-35, and 6% with those who didn’t vote in the 2020 presidential election but who are voting next Tuesday.

Erik Hrin, 47, a Marine Corps. veteran and federal employee who lives Northern Virginia, is an independent who is debating whether to support Blanding or Youngkin next week. He said the appeal of a third party candidate is a reflection of the two party system’s shortcomings.

“I would basically rather take my vote out to the middle of the street and burn it in front of everybody and say, ‘nobody deserves it,'” Hrin said. “And I think that’s the independent – especially amongst libertarians – perspective. Neither of you earned it.”

“If Black voters make up more than 20% of the voting electorate, McAuliffe will prevail,” Paleologos said. “But if the Black vote is only 16%-18% of the total votes cast, Youngkin will be governor.”

Fischbach, the retired teacher, said she worries that McAuliffe’s attempts to link Youngkin to Trump could be successful in scaring voters away from the Republican candidate.

But for some independents, any support from Trump is a disqualification

“In my opinion, Youngkin is not what Virginia needs,” said independent Tarik Moore, 45, an African American IT consultant from Ashburn, Va.

“To be honest with you it’s his association with Donald Trump,” he added. “If the situation was flipped, and he wasn’t connected to Trump and his policies, I’d be voting Republican.”