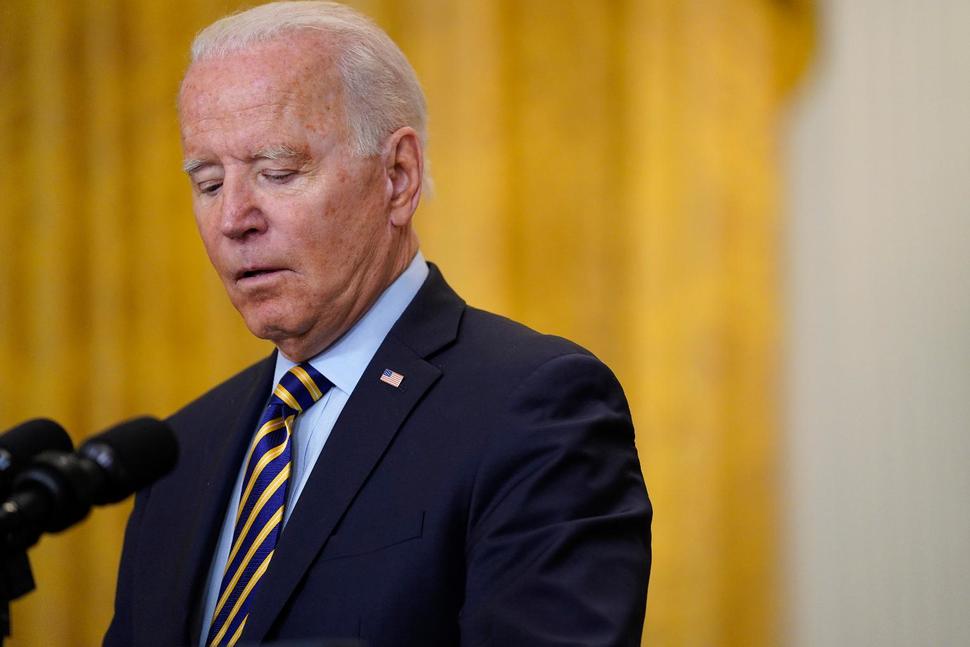 President Joe Biden was at a public transit station in Wisconsin, talking about repairing roads and bridges, when he shifted gears and began defending his plan to send money to parents for each minor child, payments some critics call a “giveaway.”

Biden folded his arms, rested on the lectern, leaned into the mic and lowered his voice.

“Hey, guys, I think it’s time to give ordinary people a tax break,” he said, almost whispering as he addressed his critics. “The wealthy are doing fine.”

It was the latest instance of Biden speaking volumes by whispering.

The White House and communications experts say Biden’s whispering is just this veteran politician’s old-school way of trying to make a connection while emphasizing a point.

Biden’s critics on the right as well as some late-night TV talk show hosts say the whispers are “creepy” and “weird.” Conservatives use the dramatic soft talk to fuel the narrative that the Democratic president is unfit for the job, and comedians deploy it to generate laughs.

Biden whispered some of his answers to reporters’ questions during an impromptu White House news conference last month after he and a group of Senate Republicans announced they had reached a deal to spend $973 billion on rebuilding the nation’s infrastructure.

As he stood in the East Room, Biden was questioned about his timeline for providing additional financial help to families. He leaned in, eyes wide, and whispered: “I got them $1.9 trillion in relief so far. They’re going to be getting checks in the mail that are consequential.”

During a lengthy response to a separate question, he whispered, “I wrote the bill,” before bending down to get closer to the microphone and adding, “on the environment.”

On the subject of employers’ hiring difficulties, Biden leaned into the mic again, arms resting on the lectern and said softly that the solution is to “pay them more.”

Beasley said the use of whispering by Biden, who was a U.S. senator and vice president for a total of more than 40 years, is a throwback to a long-ago time of chummier relations between lawmakers and members of the Washington press corps.

“I think it’s a symbolic gesture to a kind of intimacy and familiarity,” she said.

Beasley and others noted the contrast between Biden and former President Donald Trump, who often spoke loudly and angrily.

“One of the things that Trump never did was whisper,” said Robin Lakoff, professor emerita of linguistics at the University of California, Berkeley.

Public speakers — lawmakers, celebrities, corporate executives — often raise or lower their voices for dramatic effect or tell jokes to keep their audiences following along instead of falling asleep.

Beasley said the tone of political discourse these days seems set to loud so that “it sort of sets everybody back a little bit when you see someone going in a different direction and reducing their volume.”

Lakoff said what Biden does isn’t really whispering because his vocal chords vibrate and make sound.

“A true whisper is something you wouldn’t be able to hear very well,” she said, comparing what Biden does to a “stage whisper” in which an actor in a play steps out of character to share a secret with the audience or preview some action that’s about to happen.

The White House defended Biden, saying conservatives who criticize the way he speaks, including his stuttering, do so because they don’t have a better agenda to offer voters.

“Under President Biden’s leadership, COVID cases have plunged by over 90%, we’ve achieved an historic level of job creation, the economy is growing at its highest rate in 40 years, and we’ve achieved a breakthrough on the world stage to stop the offshoring of American jobs,” deputy press secretary Andrew Bates said.

“And this performative criticism is just the latest acknowledgement by Republicans that he’s running the table on them while they’re grasping for a case to make,” Bates whispered.

On the late-night talk show circuit, comedian Stephen Colbert featured what he called Biden’s “new rhetorical flourish” in a recent monologue on his CBS show.

On the flip side, Biden raises his voice, too, as he did while addressing the nation from the White House lawn on July Fourth.

“On this sacred day, I look out to those monuments on our National Mall, and beyond them, into the hearts of our people across the land and I know this,” he said, voice rising as he neared the conclusion of his speech. “It’s never, ever been a good bet to bet against America. Never.

“We just have to remember who we are. We are the United States of America,” Biden thundered. “And there’s nothing — nothing — we can’t do if we do it together.”

This story has been corrected to show the infrastructure deal was $973 billion, not $973 trillion.