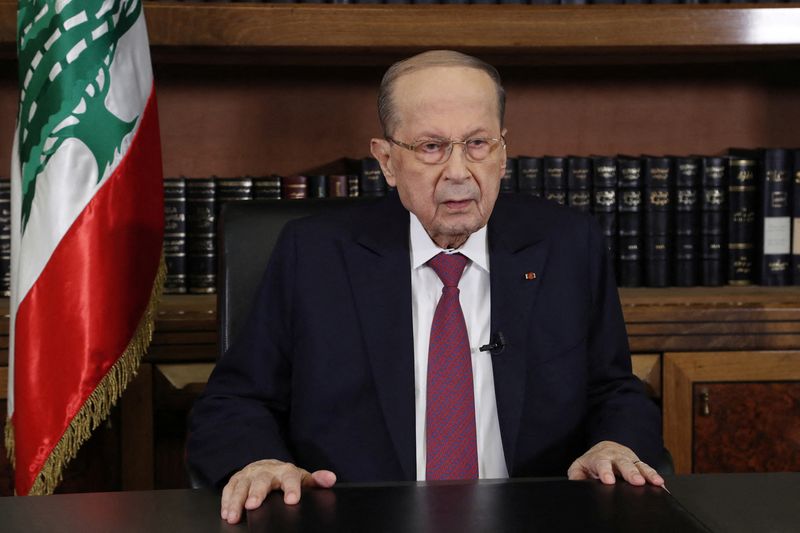 Lebanon’s President Michel Aoun is pictured as he delivers a televised speech at the presidential palace in Baabda, Lebanon December 27, 2021. Dalati Nohra/Handout via REUTERS ATTENTION EDITORS – THIS IMAGE WAS PROVIDED BY A THIRD PARTY

BEIRUT (Reuters) -Lebanese President Michel Aoun called on Monday for national dialogue on matters including a defence strategy which he said it was the state’s responsibility alone to implement, hinting at friction with his allies in the heavily armed Hezbollah.

In a televised speech, Aoun also said he wanted the best ties with Gulf Arab states, asking why relations were being put under strain following comments by a Hezbollah-aligned minister https://www.reuters.com/world/middle-east/lebanon-information-minister-resigns-ease-saudi-spat-2021-12-03 on the Yemen war that triggered a diplomatic crisis in October.

The alliance between Aoun, a Maronite Christian, and the Iran-backed Shi’ite Hezbollah has shaped Lebanese politics for 16 years.

But tensions https://www.reuters.com/world/middle-east/lebanons-top-christian-party-signals-possible-end-hezbollah-alliance-2021-12-23 have surfaced of late, pointing to the possibility of realignments ahead of a May parliamentary election in which Hezbollah’s adversaries hope to overturn the majority won by the group and its allies in 2018.

The new parliament will elect a new head of state next year.

Hezbollah helped propel Aoun to the presidency in 2016, while the president and his Free Patriotic Movement have provided vital political support for Hezbollah’s possession of an arsenal more powerful than the Lebanese army’s.

Aoun is nearing the end of his six-year term with Lebanon in the throes of what the World Bank has called one of the sharpest economic meltdowns ever recorded.

Warning the state was “falling apart”, Aoun called for urgent dialogue on a financial recovery plan, administrative and financial decentralisation, and the defence strategy.

“It is true that defending the nation requires cooperation between the army, the people and the resistance, but the main responsibility is the state’s. The state alone puts in place the defence strategy and attends to its implementation,” Aoun said in a televised speech, without naming Hezbollah.

Hezbollah’s opponents have long said its arsenal has undermined the state, embroiled Lebanon in regional conflicts, and damaged ties with wealthy Gulf Arab states that once invested heavily in Beirut but have shunned it for years.

Hezbollah, formed in 1982 by Iran’s Revolutionary Guards, says its weapons are vital to defending Lebanon from Israel. It also says its fighters shielded Lebanon from jihadists such Islamic State in Syria.

Aoun said: “I wish for the best relations with the Arab states, specifically the Gulf states. I ask: what is the justification for straining ties with these states and interfering in matters that do not concern us.”

He also said it was imperative that the government convene after going more than two months without a meeting.

Hezbollah and its Shi’ite ally Amal want the judge leading the probe into the 2020 Beirut port explosion removed and have refused to allow cabinet to meet until the issue is on the agenda. Prime Minister Najib Mikati has said the issue falls outside cabinet’s powers.