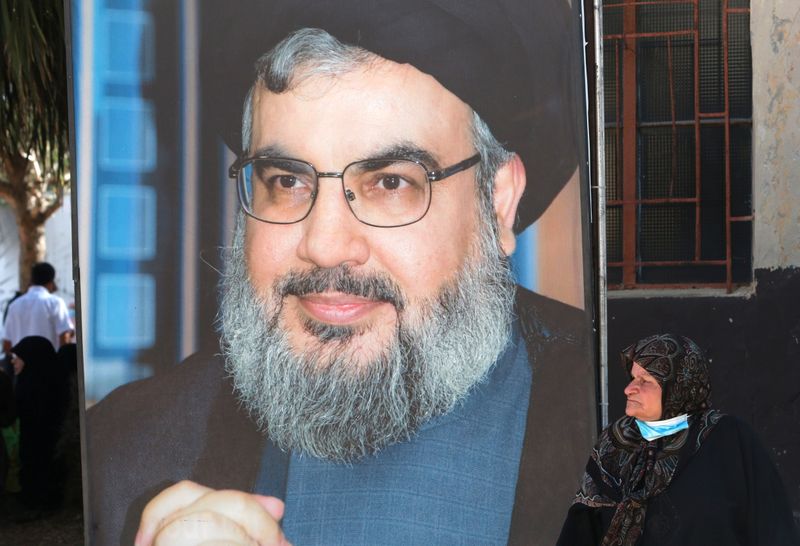 FILE PHOTO: A woman sits near a poster of Lebanon’s Hezbollah leader Sayyed Hassan Nasrallah, during an event marking Resistance and Liberation Day, in Khiam, near the border with Israel, southern Lebanon, May 25, 2021. REUTERS/Aziz Taher

BEIRUT (Reuters) -The leader of the Iranian-backed Hezbollah group, Hassan Nasrallah, said on Sunday that vessels carrying Iranian fuel will be heading to Lebanon soon followed by others to ease fuel shortages there.

Nasrallah insisted that the group was not trying to step in and replace the state by purchasing the fuel. The first vessel will be leaving Iran for Lebanon on Sunday, he said.

“We are not taking the place of the state, nor are we an alternative to companies that import fuel,” he said in a speech to supporters without elaborating on how the shipments would enter the country.

Hezbollah’s foes in Lebanon have warned of dire consequences from the move, saying it risked sanctions being imposed on a country whose economy has been in meltdown for nearly two years.

The arrival of the Iranian fuel would mark a new phase in the financial crisis, which the Lebanese state and its ruling factions – including Hezbollah – have failed to tackle even as fuel has run dry and shortages have prompted deadly violence.

The U.S. ambassador to Lebanon, Dorothy Shea, said on Thursday that Lebanon didn’t need Iranian tankers, citing “a whole bunch” of fuel ships off the coast waiting to unload.

The United States was in talks with Egypt and Jordan to help find solutions to Lebanon’s fuel and energy needs, she said, speaking hours after Hezbollah said it was arranging the shipments.