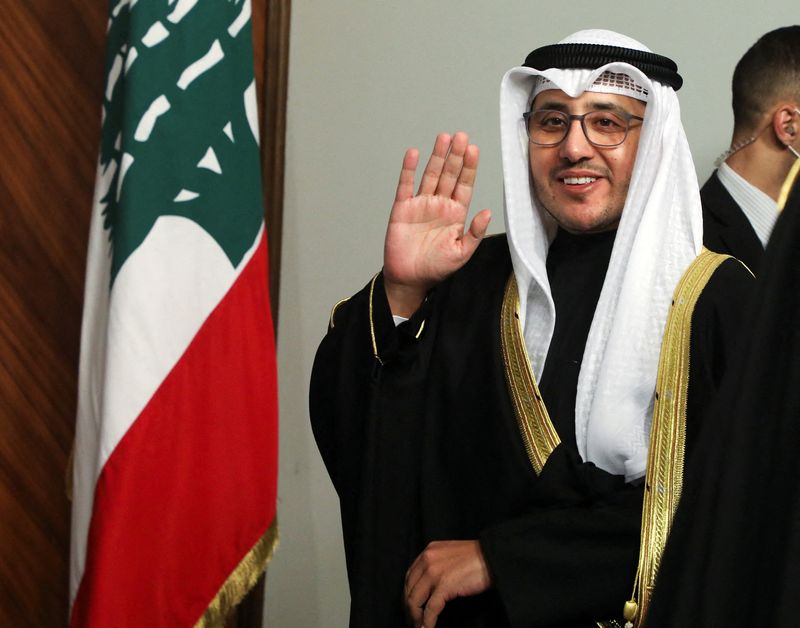 BEIRUT (Reuters) -Lebanon must not be a platform for hostile acts or words, Kuwait’s foreign minister said on Sunday while visiting Beirut, an indirect call for curbs on the Iran-backed group Hezbollah in order to improve strained ties with Gulf Arab states.

Sheikh Ahmad said on Saturday he had delivered confidence-building proposals to Prime Minister Najib Mikati, and that his trip was coordinated with Gulf states.

“We asked that Lebanon not be a platform for any aggression – verbal or actual,” Sheikh Ahmad said after meeting Aoun on Sunday. “I presented ideas and thoughts … And we are awaiting a response,” he added.

Long strained by the influence of the heavily armed Shi’ite group Hezbollah, Lebanon’s ties with Sunni-led Gulf Arab states were plunged into a new crisis in October by comments from a former Lebanese minister criticizing Saudi-led forces in Yemen.

Kuwait was one of several members of the Gulf Cooperation Council (GCC), including Saudi Arabia, that responded to George Kordahi’s remarks by expelling the Lebanese ambassador and recalling its envoy to Beirut.

Aoun, a political ally of Hezbollah, said in a tweet on Sunday Lebanon was keen on maintaining “the best relations” with the Gulf Arab states and that the Kuwaiti proposals would be discussed before an appropriate position was announced.

Lebanese governments have long declared an official policy of disassociation from wars in the Middle East, even as Hezbollah has become involved in regional conflicts, deploying fighters to Syria to help President Bashar al-Assad.