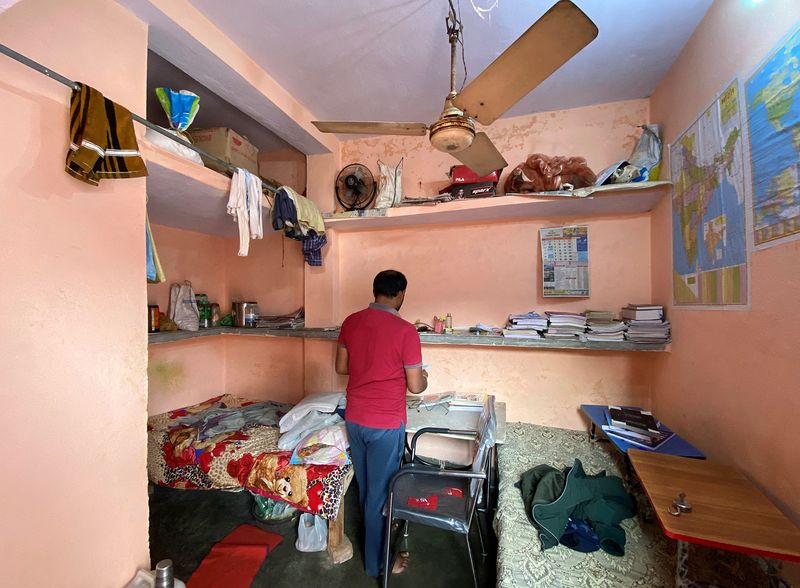 Niranjan Kumar, one of the jobless youth protesting against alleged errors in Indian Railways recruitment, checks out a notebook in his dormitory room in Patna city in the eastern state of Bihar, India, January 29, 2022. Picture taken January 29, 2022. REUTERS/Krishna N. Das

PATNA, India (Reuters) – Niranjan Kumar, the eldest son of a small farmer in the eastern Indian state of Bihar, was one of 12.5 million youngsters who applied for 35,000 jobs when the railways department started recruitment examinations more than a year ago.

The mathematics graduate, 28, and his dormitory mates did not even make it to a recently released shortlist despite preparing for years, a collective setback that triggered protests by a swelling army of unemployed youth in Bihar and neighbouring Uttar Pradesh last week.

Infuriated by what they called a bungled recruitment process, tens of thousands of students, including Kumar and his friends, blocked rail traffic, while others vandalised trains and some even burned down coaches of a stationary train that had no passengers in it at the time.

“The government is playing with our lives,” Kumar told Reuters, sitting cross-legged on a friend’s unmade bed in the congested Kashi Lodge in Bihar’s capital Patna. “They only want to privatise everything, they don’t want to hire people themselves.”

India has long had an unemployment problem and prized government jobs always attract huge numbers of candidates. But the widespread anger that has erupted over the railways jobs poses a challenge for Prime Minister Narendra Modi ahead of crucial state elections in February and March, including in Uttar Pradesh.

Modi came to power in 2014 promising development that would create millions of jobs for the surging ranks of young, educated Indians. But national unemployment peaked at 23.5% in 2020 and has stubbornly remained well above 7% since, according to data from Mumbai-based the Centre for Monitoring Indian Economy (CMIE), much higher than the global average.

As of last month, India had more than 52 million unemployed people looking for work, CMIE data shows. More worryingly, the figure does not include many jobless people in the country of 1.35 billion who have stopped seeking employment https://www.reuters.com/world/india/off-canada-indias-jobs-crisis-exasperates-its-youth-2022-01-25.

India’s working age population – those between 15 and 64 – is estimated at 1 billion, only 403 million of whom are considered employed, CMIE data shows.

“Unemployment is a very deep crisis – it is the responsibility of the prime minister to resolve it,” opposition party leader Rahul Gandhi said in a tweet this month. “The country is asking for answers, stop making excuses!”

The labour and finance ministries did not respond to requests for comment.

Gopal Krishna Agarwal, a spokesman for Modi’s Bharatiya Janata Party, said the government was aware of the jobs situation and was trying to promote manufacturing by giving production-linked incentives to industries such as defence. He said Modi himself had directed authorities to fix the problems with the railways recruitment.

“We are not in denial, we are not saying unemployment is not a problem,” he said. “But we are working on finding long-term solutions.”

In the latest incident, Kumar and the other unsuccessful candidates accuse the Indian Railways of mismanaging the recruitment process by shortlisting many people for multiple job roles.

“Had they shortlisted one candidate for only one role, we would have made it too and who knows could have cleared the main exam later,” Kumar said.

“I have not paid my rent for a year and my father has told me he won’t support me financially beyond this year,” added Kumar, a bearded and balding man.

“My family has always had a difficult existence,” he said. “A government job for me is the only way out.”

Kashi Lodge has dozens of residents, mostly from poor rural families, who have been preparing for competitive exams for government jobs for at least five years. As Kumar spoke, a young man was bathing in his underwear on a small balcony, while others cooked lunch on stoves mounted on small gas cylinders placed by their beds.

Another man in the lodge, Ajay Kumar Mishra, says he had been a big Modi devotee and cheered when he came to Patna to seek votes before the 2014 general election.

“We poured our heart out for him,” said Mishra, thumping his chest as others crowded the narrow balcony by his room door. “Now he will have to listen to the same youth who are hurting so much.”

“Does he want us to sell tea and pakodas (snacks)? Maybe that’s what we will have to do eventually. Time is running out for us, we will soon be too old to apply for government jobs.”

Mishra says he has to find a job quickly because his father will retire as a university worker next year, and the burden of taking care of his family will soon fall on him.

“It’s now or never for us,” he said, books of current affairs and other topics strewn across another bed in his room and on its cement shelves, watched over by a picture of the Hindu goddess of learning, Saraswati.

“We have started a leader-less revolution in which everyone is a leader because everyone is affected,” Mishra said.