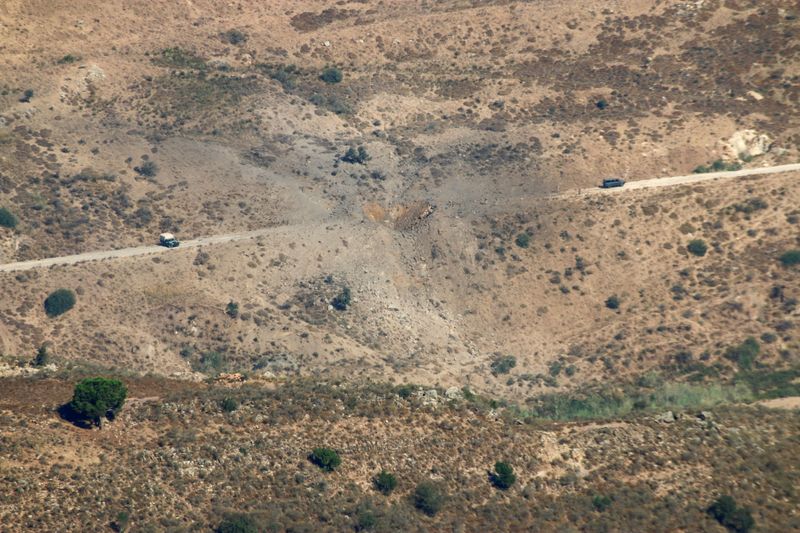 A view shows the damage in the aftermath of Israeli air strikes as seen from Marjayoun, near the border with Israel, Lebanon August 5, 2021. REUTERS/Karamallah Daher

JERUSALEM (Reuters) -Israeli jets struck what its military said were rocket launch sites in Lebanon early on Thursday in response to two rockets fired towards Israel from Lebanese territory, in an escalation of cross-border hostilities amid heightened tensions with Iran.

The rockets launched from Lebanon on Wednesday struck open areas in northern Israel, causing brush fires along the hilly frontier. There was no claim of responsibility for the attack, which came from an area of south Lebanon under the sway of Iranian-backed Hezbollah guerrillas.

Israel responded with several rounds of artillery fire on Wednesday before launching air strikes early on Thursday, the military said.

“(Military) fighter jets struck the launch sites and infrastructure used for terror in Lebanon from which the rockets were launched,” the military said in a statement.

The military also struck an area that had seen rocket launches in the past, it added.

Lebanese President Michel Aoun said Israel’s overnight air strikes were the first since 2006 and showed an escalation in its “aggressive intent” towards his country.

Aoun also said in a tweet the strikes were a direct threat to the security and stability of southern Lebanon and violated U.N. Security Council resolutions.

Hezbollah’s Al-Manar TV earlier said that Israeli warplanes had carried out two raids on the outskirts of the Lebanese town of Mahmudiya, about 12 km (7.5 miles) from the Israeli border. There were no reports of casualties.

Speaking to Israel’s YNet TV, Defence Minister Benny Gantz said: “This was an attack meant to send a message … Clearly we could do much more, and we hope we won’t arrive at that.”

The border has been mostly quiet since Israel fought a 2006 war against Hezbollah, which has advanced rockets.

The border incidents came after a suspected drone attack last Thursday on a tanker off the coast of Oman that Israel, the United States and Britain blamed on Iran. Two crew members, a Briton and a Romanian, were killed. Iran has denied any involvement.

The United States and Britain said on Sunday they would work with their allies to respond to the attack. Israel says it is keeping the option open of acting alone if necessary.

(Additional reporting by Dan Williams and Ari Rabinovitch in Jerusalem, Alaa Swilam and Ahmed Tolba in Cairo and Suleiman al-Khalidi in Amman; Editing by Richard Pullin and Nick Macfie)