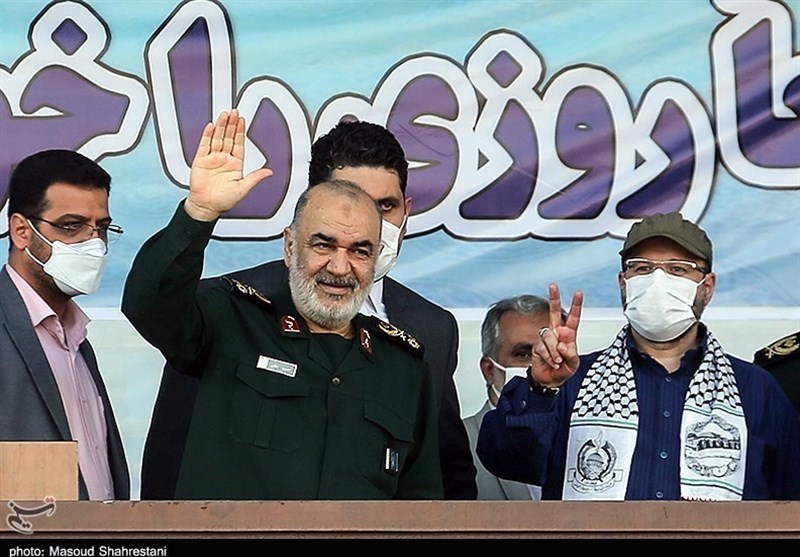 Commander of the Islamic Revolution Guards Corps Major General Hossein Salami denounced the Israeli regime as the epitome of the arrogance front, reaffirming that the IRGC will keep supporting the Palestinian nation.

In a show of support for the Palestinian nation, a group of Iranian protesters gathered in Tehran on Wednesday to denounce the Zionist regime’s brutal attacks on the Gaza Strip.

In an address to the gathering, Major General Salami pledged Iran’s unwavering support for the Palestinian nation.

He also praised the strong resistance put up by the Palestinians in the face of the Israeli raids, saying, “More than two-thirds of Zionist cities were attacked by Palestinian rockets from Gaza, leaving no safe haven for them. All of the Israeli regime’s missile defense systems have failed against thousands of Palestinian missiles.”

The IRGC commander noted that Israelis were “frustrated” in the face of the “revived” Palestinian resistance.

The IRGC chief further noted that Israel has suffered “an eternal defeat” after its missile factory was targeted, the explosion at the Haifa refinery, which were all followed the regime’s act of sabotage at Iran’s Natanz nuclear facility, Press TV reported.

Israel’s latest bombardment of the Gaza Strip since May 10 has killed at least 227 people, including 64 children and 38 women.

More than 11,300 Palestinians have also been injured in the Israeli airstrikes that have targeted the coastal enclave’s infrastructure, destroying homes, roads, medical facilities, schools, power lines and sanitation and sewage systems across the impoverished territory, which has been under Israel’s siege for more than a decade.