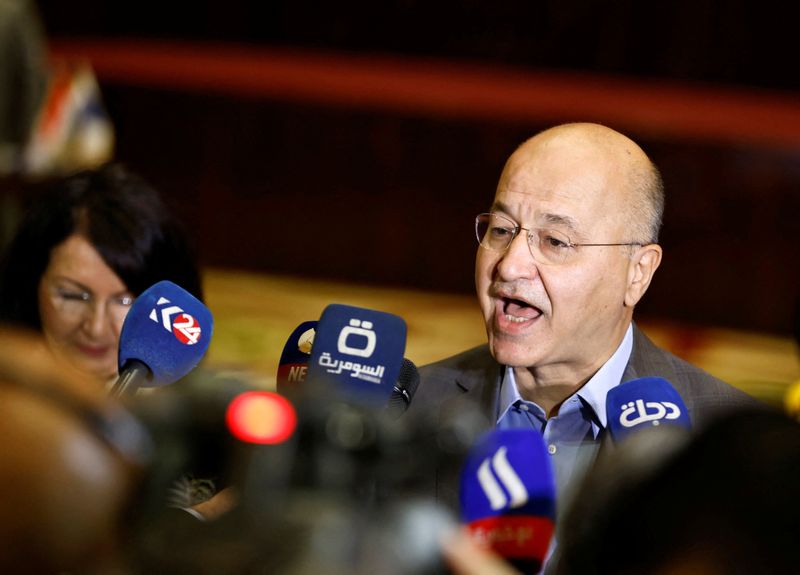 Iraq’s President Barham Salih speaks to members of the media as he casts his vote at a polling station in Baghdad, as Iraqis go to the polls to vote in the parliamentary election, in Iraq, October 10, 2021. REUTERS/Thaier al-Sudani/File Photo

BAGHDAD (Reuters) -Iraq’s new parliament will convene on Jan. 9, according to a decree issued on Thursday by President Barham Salih, preparing the way for lawmakers to put a new government in place.

Lawmakers will elect a parliamentary speaker and two deputies in their first session. They will later elect a new president who will task the leader of the largest bloc to form a government as prime minister.

The main winner of the Oct. 10 election was Shi’ite cleric Moqtada al-Sadr, a populist who has positioned himself as a staunch opponent of both Iran and the United States.

Sadr’s bloc, already the biggest in the 329-seat parliament, will expand to 73 seats from 54. Its main rivals for years, the Fatah bloc of factions linked to pro-Tehran militia, meanwhile, saw its parliamentary representation collapse to just 17 seats from 48.

Fatah bloc political leaders held a meeting with cleric Sadr at his home in the southern holy city of Najaf on Wednesday to discuss the formation of the government, but no clear results have been announced after the meeting, said two Shi’ite officials who attended.

“Atmospheres were positive and we think we need to hold more meetings to reach common ground,” said one Shi’ite official.

Because no coalition won a majority, Shi’ite, Sunni and Kurdish coalitions have been jockeying for position in the new government.