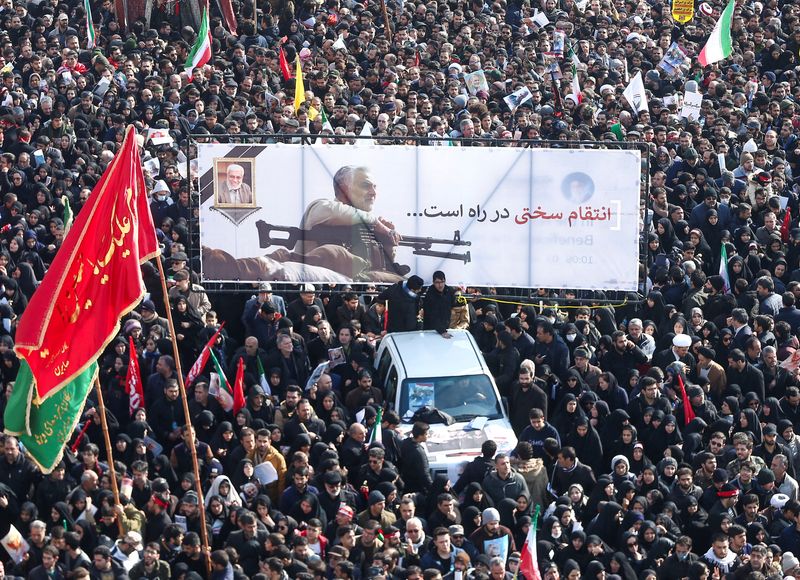 By Ahmed Rasheed and John Davison

BAGHDAD (Reuters) – Iraq might for the first time in years get a government that excludes Iran-backed parties if a powerful populist cleric who dominated a recent election keeps his word, Iraqi politicians, government officials and independent analysts say.

But moves by the Shi’ite Muslim cleric, Moqtada al-Sadr, to sideline rivals long backed by Tehran risks the ire of their heavily armed militia that make up some of the most powerful and most anti-American military forces in Iraq, they say.

The surest sign of Sadr’s new parliamentary power and his willingness to ignore groups loyal to Iran came on Sunday when his Sadrist Movement, together with a Sunni parliament alliance and Western-leaning Kurds, re-elected a parliamentary speaker opposed by the Iran-aligned camp with a solid majority.

Parliament must in the coming weeks choose the country’s president, who will call on the largest parliamentary alliance to form a government, a process that will be dominated by the Sadrist Movement whoever it chooses to work with.

“We are on track to form a national majority government,” Sadr said in a statement this week, using a term that officials say is a euphemism for a government made up of Sadrists, Sunnis and Kurds but no Iran-backed parties.

“We have a real majority, a strong front that includes us, the Sunnis, most of the Kurds and many independents and can form a government very soon.”

Iraqi politicians and analysts say the rise of Sadr and political decline of the Iranian camp, long hostile to the United States, suits Washington https://www.reuters.com/investigates/special-report/iraq-cleric and its allies in the region, despite Sadr’s unpredictability.

But excluding the Iran camp from government risks a violent backlash.

“If the Sadrists get their national majority government … those who oppose them will view this as splitting the Shi’ites and threatening their power,” Ahmed Younis, an Iraqi political and legal analyst, said.

“They will do all they can to avoid losing that grip.”

Shi’ite groups have dominated Iraqi politics since the U.S.-led overthrow of Sunni dictator Saddam Hussein in 2003. They span an array of parties, most with armed wings, but fall broadly now into two camps: those that are pro-Iran and those that oppose Tehran’s influence in Iraq.

The Shi’ite elite have shared control over many ministries, with Iran-aligned groups holding the upper hand until the recent rise of Sadr, the biggest winner in the Oct. 10 election which dealt a crushing blow to the Iran camp https://www.reuters.com/world/middle-east/iraq-counts-votes-after-lowest-ever-election-turnout-2021-10-11.

For the first time post-Saddam, the Iran-aligned groups could see themselves in opposition in parliament.

Events since the election have showed how dangerous the sharpening divide between Sadr and his Iran-backed opponents has become.

It was not immediately clear if this was linked to Halbousi’s election by parliament on Sunday or who was responsible. There was no claim of responsibility. One Iran-aligned group issued a warning this week after the parliament’s decision that Iraq could see a spiral of violence.

An Iraqi government official, who declined to be named, said he expected those in the Iran camp to use the threat of violence to get a place in government, but not to escalate into a full-scale conflict with Sadr.

Other observers, however, say Sadr’s insistence on sidelining Iran-aligned parties and militias could be a dangerous gamble.

“The question is, does he (Sadr) realise how potentially destabilising this is and is he ready for the violent push back?” said Professor Toby Dodge of the London School of Economics.

“The (Iran-backed) militias are increasingly overtly threatening violence, and Sadr is saying they cannot do this. It’s a scary moment.”

Halbousi’s election was viewed as an easy victory for the Sadrists. But the stakes will be higher in selecting a president and a prime minister.

“The Sadrists … marginalizing parts of the Shi’ite political class could lead to boycotts of the government, protests in the street and armed violence,” said Ibrahim Mohammed, a senior member of the Iran-aligned Fatah political alliance.

A second Sadrist politician, who declined to be named on orders from his party, said: “We’re powerful, we have a strong leader and millions of followers who are ready to take to the streets and sacrifice themselves.”